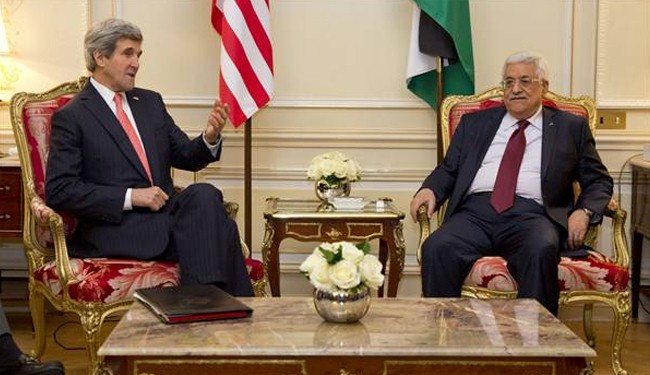 A new poll has shown that Americans, by a margin of two to one, hold Mahmoud Abbas’ Palestinian Authority (PA) responsible for the recent breakdown in Israeli/Palestinian peace talks. The poll, conducted between May 2–14, 2014, by Paragon Insights for The Israel Project, found that 66% of Americans believe that, following the reconciliation agreement between Abbas/ Fatah/PA and Hamas, Israel “cannot be expected to negotiate with a government or party that does not recognize its right to exist and seeks to destroy it,” rejecting the Palestinian argument that “a unity government of all Palestinians is the first step to lasting peace.” Only 34% of Americans disagreed and accepted the Palestinian claim that the Fatah/Hamas unity agreement was a positive development.

The survey also found that Americans deduce from Abbas’ preference for partnership with Hamas that the U.S.-brokered talks were thus bound to collapse. By 66% to 33%, Americans believe that Israel “can no longer negotiate with the Palestinian Authority now that they are forming a unity government with Hamas,” and reject the claim –– as articulated by a PA official –– that “the choice of unifying the Palestinian people enforces peace, and there is no contradiction whatsoever between reconciliation and negotiations” (The Israel Project, ‘National Poll on Middle East Peace Process’).

“…non-acceptance of Israel, not the announcement of the building of Jewish homes in part of Jerusalem, is the obstacle that prevents peace …”

Hamas is a terrorist organization that calls in its Charter for the destruction of Israel (Article 15) and the murder of Jews (Article 7).

ZOA National President Morton A. Klein said, “A large majority of Americans show that they understand better than the Obama Administration that Palestinian extremism and non-acceptance of Israel, which finds clear expression in the PA’s unity deal with Hamas, is the principal reason peace is presently not possible. They understand better than our government, to judge by the statements of President Obama and Secretary of State Kerry, that non-acceptance of Israel, not the announcement of the building of Jewish homes in part of Jerusalem, is the obstacle that prevents peace and impedes talks.”

We would love to hear from you! Please fill out this form and we will get in touch with you shortly.
Trending Z
Uncategorized May 29, 2014
FLASH: ISRAEL-JORDAN PEACE TREATY (1994) GUARANTEES JEWS ACCESS TO THE TEMPLE MOUNT – LET MY PEOPLE PRAY
Uncategorized May 29, 2014
ZOA Analysis: Most American Rabbis Who Are Boycotting Some Israeli Ministers Are From Extremist Left Wing Groups (J Street; T’ruah; JVP)
Uncategorized May 29, 2014
Israel’s “Right of Return” Grandparent Clause is De-Judaizing the Jewish State – Eliminate It
Uncategorized May 29, 2014
Exclusive: ZOA Accuses Ilhan Omar of Hating the U.S. ‘as Much as Israel,’ Lauds Kevin McCarthy for ‘Throwing Her Off the HFAC’
Center for Law & Justice
We work to educate the American public and Congress about legal issues in order to advance the interests of Israel and the Jewish people.
We assist American victims of terrorism in vindicating their rights under the law, and seek to hold terrorists and sponsors of terrorism accountable for their actions.
We fight anti-Semitism and anti-Israel bias in the media and on college campuses.
We strive to enforce existing law and also to create new law in order to safeguard the rights of the Jewish people in the United States and Israel.
Our Mission
ZOA STATEMENT
The ZOA speaks out for Israel – in reports, newsletters, and other publications. In speeches in synagogues, churches, and community events, in high schools and colleges from coast to coast. In e-mail action alerts. In op-eds and letters to the editor. In radio and television appearances by ZOA leaders. Always on the front lines of pro-Israel activism, ZOA has made its mark.
Related Articles
OP-ED ZOA Praises ADL, AJC Call For Further Review of Hagel’s Record – AIPAC & Others Silent