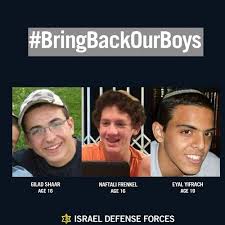 The Zionist Organization of America (ZOA) mourns the deaths of the three Jewish Israeli youths –– Eyal Yifrah, 19, Gilad Shaar, 16, and Naftali Fraenkel, 16 –– snuffed out by Palestinian Arab terrorist murderers who abducted them earlier this month near Hebron. The corpses of the three teenagers were discovered earlier today by Israeli police, bound and partially buried, in an open field at Wadi Tellem near Hebron.

The kidnappers have been identified by Israel as Marwan Kawasmeh and Amar Abu-Eisha, who belong to Hamas, which calls in its Charter for the worldwide murder of Jews and with which Mahmoud Abbas’ Fatah/Palestinian Authority (PA) formed a new government last month. The ZOA has called on President Barack Obama to terminate U.S. taxpayer-funded aid to the Hamas/Fatah unity regime.

The ZOA condemns this heinous crime committed by the Palestinian Arab terrorists and is also deeply critical of the fact that President Barack Obama did not condemn the kidnapping of the youths at any time during the 18-day ordeal, even though one of the youths, Naftali Frankel, was a dual American-Israeli citizen.

ZOA National President Morton A. Klein said, “The ZOA mourns the lives of these three Jewish teenagers, mercilessly and viciously snuffed out by their Palestinian terrorist abductors. Our hearts are grief-stricken and go out to their families, who have endured an unimaginable nightmare, only to awaken to utter horror and loss.

“We condemn this unspeakable crime, one which Hamas has ghoulishly praised and welcomed, Hamas leader Khaled Meshaal saying, ‘Blessed be the hands that captured them.’

“We now call upon Abbas to terminate his Fatah/PA unity regime with Hamas, especially in view of the PA’s statement earlier this month that it would do so if Hamas was involved in the kidnapping.

“We also condemn Abbas for his criticism of Israel having mounted extensive, house-to-house searches for the kidnapped youths. This is what any self-respecting country does when its citizens are victims of terrorism. When the Boston Marathon was bombed by radical Muslim terrorists, the Boston police locked down half the city and conducted house-to-house searches until they located the perpetrators. Why would or should Israel do any less?

“We condemn this unspeakable crime, one which Hamas has ghoulishly praised and welcomed…”

“We are also critical of President Obama throughout this crisis. In 18 days, he uttered no criticism or condemnation of the kidnapping of the three youths, one of whom is an American citizen; he merely expressed concern. Condemnation of this terrorist act came only from Secretary of State John Kerry ––  after several days had passed. We believe it is grossly inadequate for an American president to fail to condemn this kidnapping, involving an American citizen.

“Did not President Obama say on May 23 at the National Defense University that the U.S. needed to conduct ‘a series of persistent, targeted efforts to dismantle specific networks of violent extremists that threaten America’? Surely this should mean cutting off a regime which includes just such a terrorist network?

“We call upon President Obama to demand that Abbas terminate his unity regime with Hamas, failing which he will cut relations and aid to the PA. In particular, he should immediate announce the cancellation of nearly $500 million recently announced to the Hamas/Fatah regime.”

We would love to hear from you! Please fill out this form and we will get in touch with you shortly.
Trending Z
News June 30, 2014
ZOA Condemns U.S. State Dept. & U.S. Amb. Nides For Siding with Antisemitic, Discriminatory Palestinian & Hamas Terrorists re: the Temple Mount, Violating Jews’ Religious Freedom
News June 30, 2014
ZOA’s Klein JPost Op-Ed: There is Nothing Extreme About Israel’s New Government
Uncategorized June 30, 2014
FLASH: ISRAEL-JORDAN PEACE TREATY (1994) GUARANTEES JEWS ACCESS TO THE TEMPLE MOUNT – LET MY PEOPLE PRAY
Uncategorized June 30, 2014
ZOA Analysis: Most American Rabbis Who Are Boycotting Some Israeli Ministers Are From Extremist Left Wing Groups (J Street; T’ruah; JVP)
Center for Law & Justice
We work to educate the American public and Congress about legal issues in order to advance the interests of Israel and the Jewish people.
We assist American victims of terrorism in vindicating their rights under the law, and seek to hold terrorists and sponsors of terrorism accountable for their actions.
We fight anti-Semitism and anti-Israel bias in the media and on college campuses.
We strive to enforce existing law and also to create new law in order to safeguard the rights of the Jewish people in the United States and Israel.
Our Mission
ZOA STATEMENT
The ZOA speaks out for Israel – in reports, newsletters, and other publications. In speeches in synagogues, churches, and community events, in high schools and colleges from coast to coast. In e-mail action alerts. In op-eds and letters to the editor. In radio and television appearances by ZOA leaders. Always on the front lines of pro-Israel activism, ZOA has made its mark.
Related Articles
OP-ED Fmr. Secy. Colin Powell: Defense Dept. Influences Presidential Policy