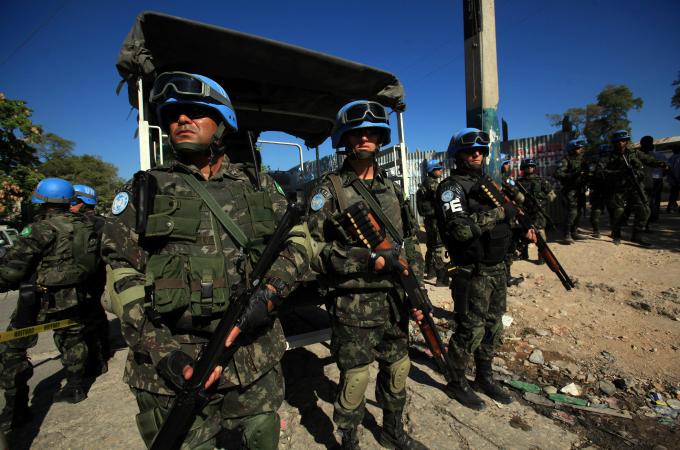 The Zionist Organization of America (ZOA) has pointed to the disintegration in recent days of the United Nations Disengagement Observer Force (UNDOF), the UN peace-keeping force that has monitored the Israeli/Syrian ceasefire lines since 1974, as stark refutation of Secretary of State John Kerry’s proposal that Israel to entrust its security in Judea/Samaria to an international peace-keeping force in a future peace agreement with Mahmoud Abbas’ Palestinian Authority (PA).

Last week, the al-Qaida-linked Nusra Front seized the strategic Quneitra border crossing from UNDOF, sending a contingent of Filipino peacekeepers scrambling for safety in Israel. It also took 45 Fijian peacekeepers hostage, who were subsequently released. This is fourth abduction of peacekeepers since March 2013, leading several countries to withdraw their troops from UNDOF.

United Nations (UN) spokesman Stephane Dujarric said, “Armed groups have made advances in the area of UNDOF positions, posing a direct threat to the safety and security of the U.N. peacekeepers along the ‘Bravo’ (Syrian) line and in Camp Faouar.” Mr. Dujarric added that all UNDOF forces have been withdrawn to the Israel side of the ceasefire lines (Louis Charbboneau, ‘U.N. Golan peacekeepers pull back from Syrian positions amid clashes,’ Reuters, September 15, 2014).

During the recent failed peace talks between Israel and the Palestinians and before, Secretary of State John F. Kerry suggested that Israel yield control over Judea/Samaria to the PA with international peacekeepers stationed in the Jordan Valley abutting Jordan.

When terrorist groups rule the areas in question… peace-keepers achieve little or nothing and often turn into an additional hindrance to Israeli security.

ZOA National President Morton A. Klein, “We see here the heedlessness of the various, repeated suggestions over the years, including by Secretary Kerry, that a satisfactory peace agreement that meets Israel’s security needs can be achieved by Israel entrusting the security of vital frontier zones to international peacekeepers.

“The trouble, as the case of UNDOF illustrates, is that peace-keepers are only good when there is a genuine peace to maintain. When terrorist groups rule the areas in question, however, peace-keepers achieve little or nothing and often turn into an additional hindrance to Israeli security.

“Quite apart from the fact that every Israeli government has regarded the retention of the Jordan Valley as vital to Israel’s security, how can Secretary Kerry seriously suggest a force of international peacekeepers would secure the border?

“Did UNIFIL do that in Lebanon? Or did it became the shield behind which Hizballah has massively rearmed with tens of thousands of rockets?

“Peacekeepers are there to maintain a peace that is already there. Once the peace ends, they have no function. Yet, Israel doesn’t need peacekeepers in the Jordan Valley to maintain peace with Jordan. Israel needs to ensure that hostile terrorists or a new regime in Jordan doesn’t threaten Israel. Israeli troops won’t run, because that is their home. But peacekeepers will.

“Secretary Kerry doesn’t understand or feigns not to know that Israel can be the only reliable guarantor of its own security, not foreign troops under a UN flag, who, when it comes to the crunch, will find reasons not to risk their lives.”

We would love to hear from you! Please fill out this form and we will get in touch with you shortly.
Trending Z
News September 23, 2014
ZOA Deplores that Pres. Trump Dined with Jew-Haters Kanye West & Nick Fuentes, and Demands he Condemn Them
Uncategorized September 23, 2014
ZOA Honors Trump With Rarely Given Herzl Award for His Great Pro-Israel Work – Joins Ranks of Balfour, Truman, Begin, Meir, Ben-Gurion
News September 23, 2014
ZOA Responds to Questions About Pres. Trump, Kanye West, Fuentes, etc. Issue
Uncategorized September 23, 2014
Zionist Organization of America Honors Donald Trump for Support for Israel, Jewish Community
Center for Law & Justice
We work to educate the American public and Congress about legal issues in order to advance the interests of Israel and the Jewish people.
We assist American victims of terrorism in vindicating their rights under the law, and seek to hold terrorists and sponsors of terrorism accountable for their actions.
We fight anti-Semitism and anti-Israel bias in the media and on college campuses.
We strive to enforce existing law and also to create new law in order to safeguard the rights of the Jewish people in the United States and Israel.
Our Mission
ZOA STATEMENT
The ZOA speaks out for Israel – in reports, newsletters, and other publications. In speeches in synagogues, churches, and community events, in high schools and colleges from coast to coast. In e-mail action alerts. In op-eds and letters to the editor. In radio and television appearances by ZOA leaders. Always on the front lines of pro-Israel activism, ZOA has made its mark.
Related Articles
OP-ED BY: Morton Klein / Susan Tuchman ZOA Urges State Dept: Stop Referring to Eastern J’lem As “Palestinian Territories”