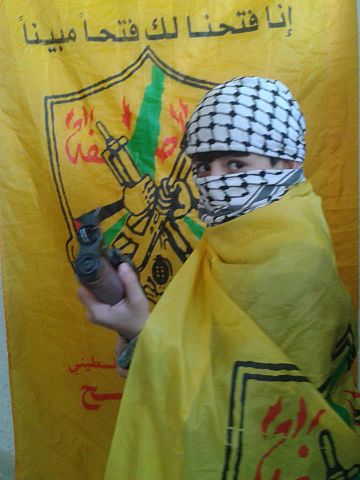 The Zionist Organization of America (ZOA) has condemned Mahmoud Abbas’ Palestinian Authority (PA) for praising the attempted murder  of a 9-year old Jewish girl by a member of Fatah, the party founded by Yasser Arafat which controls the PA and of which Mahmoud Abbas is leader. The girl was shot and wounded in the Psagot, in the Judean hills on Saturday. Her attacker was immediately praised on the official Fatah Facebook page, where it stated praised “the sniper of Palestine” and stated “The sniper of Palestine was here. He saluted Hebron, and rested in El-Bireh. He left the signature of [real] men in different parts of the homeland. He saluted and left, and moved on to a different place, with a new signature, as he tells the stories of those who love the homeland” (Facebook, “Fatah – The Main Page,” Oct. 6, 2013, translation in ‘Fatah praises terrorist shooter of 9 year-old,’ Palestinian Media Watch bulletin, October 6, 2013).

In other recent acts of vicious incitement and glorification of Jew-killing terrorists, the PA last week held a memorial for terrorist Abu Sukkar, who murdered 15 Israelis with a bomb and whom Abbas personally praised in a speech, saying that “Fatah lost a beacon.” A few days earlier, Fatah Central Committee member, Jibril Rajoub, who also heads the Palestinian Olympic Committee, glorified terrorist Dalal Mughrabi, the Fatah terrorists who led the coastal road bus hijacking in 1978 in which 37 Israelis were killed, including a dozen children, sponsoring The Martyr Dalal Mughrabi Table Tennis Tournament. At the closing ceremony, Vice President of the Palestinian Table Tennis Association, Radwan Al-Sharif, honored terrorist Dalal Mughrabi, when he “mentioned the glorious deeds of hero Martyr Dalal Mughrabi” (Al-Hayat Al-Jadida, October 1, 2013, translation in ‘Terrorist Dalal Mughrabi glorified in ping pong tournament sponsored by Palestinian official Jibril Rajoub,’ PMW bulletin, October 2, 2013). Also in the past week, PA radio broadcast a poem read by PA schoolchildren which includes the words “our enemy, Zion, is Satan with a tail” (PA TV Live, September 30, 2013, translation in PMW Bulletin, ‘PA award to Egyptian writer of poem that includes words “our enemy, Zion, is Satan with a tail,”’ October 6, 2013).

In the Israeli Cabinet meeting yesterday, Prime Minister Netanyahu condemned the incitement within the PA saying, “We do not content ourselves with the fact that our staunch security policies have made this the most quiet year in a decade in terms of terrorist attacks. First of all, we detect an increase in terror attacks recently, and I must say that as long as incitement continues in the Palestinian media, the [Palestinian] Authority cannot evade responsibility for these incidents.”

ZOA National President Morton A. Klein said, “The attempted murder by shooting of a young Jewish girl by a Palestinian terrorists and the praise for this deed in official PA and Fatah organs is but the latest example of shameless promotion hatred and glorification of Jew-killing terrorist.

PA radio broadcast a poem read by PA schoolchildren which includes the words “our enemy, Zion, is Satan with a tail”

“For Mahmoud Abbas, the only problem with the attempted murder of a Jewish girl is that it didn’t succeed. The PA is not a peace partner, it is the incubator of war and hatred.

“We strongly support the Israeli government drawing attention to odious and vicious Palestinian incitement to hatred and murder and hope it will go further by demanding an end these activities before Israel will either negotiate further or consider any concessions to the PA which has so far done nothing to merit them. It’s high time that the PA was made accountable for its flagrant and vicious anti-peace, pro-terror, pro-murder words and deeds.

“The world – and sadly, the Obama Administration – largely ignores and even whitewashes the PA on the issue of incitement, even when the Netanyahu government has raised the issue directly with Washington.

“More than any other major American Jewish organization, the ZOA, for the last 20 years, has relentlessly exposed this incitement in our own reports, speeches, articles, statements and appearances on TV and radio.

“The Obama Administration needs to support Israel in bringing the issue of Palestinian non-compliance on fighting terrorism and ending the incitement to hatred and murder that feeds it to the center of attention. President Obama himself has said more than once that Palestinians need to end incitement before progress can be made and it is essential that all possible U.S. pressure –– including withholding of U.S. aid –– be exerted on Abbas and the PA to comply. Without this, all hopes for any true and durable peace are illusions built on sand.

“The continuation by the Palestinian Arabs of the vilification and demonization of Jews and the promotion of hatred and violence against Jews in the PA schools, media, speeches, sermons and children’s camps makes peace absolutely impossible. We strongly urge Prime Minister Netanyahu to hold a series of press conferences with posters and pictures detailing this vile and relentless incitement against Jews and Israel, which includes the naming of schools, streets, sports teams and even computer centers after Jew-killing Arab terrorists.”

We would love to hear from you! Please fill out this form and we will get in touch with you shortly.
Trending Z
News October 8, 2013
ZOA Condemns U.S. State Dept. & U.S. Amb. Nides For Siding with Antisemitic, Discriminatory Palestinian & Hamas Terrorists re: the Temple Mount, Violating Jews’ Religious Freedom
News October 8, 2013
ZOA’s Klein JPost Op-Ed: There is Nothing Extreme About Israel’s New Government
Uncategorized October 8, 2013
FLASH: ISRAEL-JORDAN PEACE TREATY (1994) GUARANTEES JEWS ACCESS TO THE TEMPLE MOUNT – LET MY PEOPLE PRAY
Uncategorized October 8, 2013
ZOA Analysis: Most American Rabbis Who Are Boycotting Some Israeli Ministers Are From Extremist Left Wing Groups (J Street; T’ruah; JVP)
Center for Law & Justice
We work to educate the American public and Congress about legal issues in order to advance the interests of Israel and the Jewish people.
We assist American victims of terrorism in vindicating their rights under the law, and seek to hold terrorists and sponsors of terrorism accountable for their actions.
We fight anti-Semitism and anti-Israel bias in the media and on college campuses.
We strive to enforce existing law and also to create new law in order to safeguard the rights of the Jewish people in the United States and Israel.
Our Mission
ZOA STATEMENT
The ZOA speaks out for Israel – in reports, newsletters, and other publications. In speeches in synagogues, churches, and community events, in high schools and colleges from coast to coast. In e-mail action alerts. In op-eds and letters to the editor. In radio and television appearances by ZOA leaders. Always on the front lines of pro-Israel activism, ZOA has made its mark.
Related Articles
OP-ED CIA Nominee Brennan Dismisses Radical Islam, Calls J’lem Al-Quds, Whitewashes Hizballah