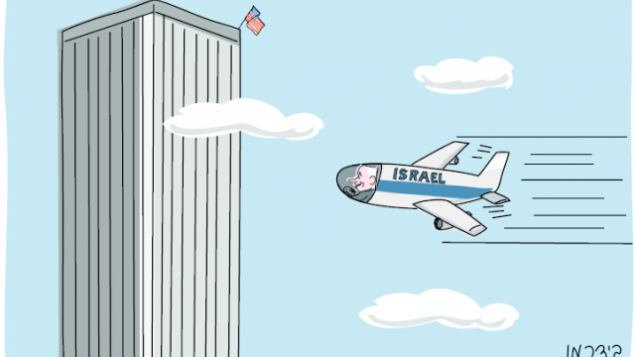 ZOA National Chairman of the Board Dr. Michael Goldblatt has issued the following statement:

“We are completely appalled at the Haaretz cartoon showing the Israeli Prime Minister flying a plane, bearing the name “ISRAEL,” into a U.S. skyscraper.

“It is utterly poisonous, hysterical and wrong to suggest that disagreement between an Israeli government and the U.S. Administration — a disagreement over vital matters of peace and security, in which the democratically-elected Israeli government has every right and duty to disagree if it sees fit — is comparable to an act of evil suicide terrorism of the 9/11 variety that struck the United States 13 years ago.

“The Haaretz editors failed miserably at their job… They should publicly apologize immediately and remove the cartoon from their website.”

“As the ZOA detailed yesterday in a press release, the Obama Administration has a disgraceful and deeply worrying record of hostility to Israel, indulgence of Mahmoud Abbas’ anti-peace and pro-terror Palestinian Authority, and double standards associated with these biases. Yet, Haaretz sees fit to ignore all this and to publish a cartoon, not merely critical of the Israeli government, but holding the Israeli Prime Minister guilty of malice and actual aggression towards the United States.

“It is impossible to believe that the editors of Haaretz responsible for the decision to publish this malicious cartoon could not have known that hatemongers across the world claim Israel engineered the 9/11 attacks, and promote other vicious anti-Israel lies.  Given this, it was unconscionable for an Israeli paper, no less, to play any role in demonizing Israel with falsehoods.

“The Haaretz editors failed miserably at their job. They have displayed an astonishing lack of judgment. They should publicly apologize immediately and remove the cartoon from their website.”

We would love to hear from you! Please fill out this form and we will get in touch with you shortly.
Trending Z
News October 30, 2014
ZOA Condemns U.S. State Dept. & U.S. Amb. Nides For Siding with Antisemitic, Discriminatory Palestinian & Hamas Terrorists re: the Temple Mount, Violating Jews’ Religious Freedom
Uncategorized October 30, 2014
FLASH: ISRAEL-JORDAN PEACE TREATY (1994) GUARANTEES JEWS ACCESS TO THE TEMPLE MOUNT – LET MY PEOPLE PRAY
Uncategorized October 30, 2014
ZOA Analysis: Most American Rabbis Who Are Boycotting Some Israeli Ministers Are From Extremist Left Wing Groups (J Street; T’ruah; JVP)
Uncategorized October 30, 2014
Israel’s “Right of Return” Grandparent Clause is De-Judaizing the Jewish State – Eliminate It
Center for Law & Justice
We work to educate the American public and Congress about legal issues in order to advance the interests of Israel and the Jewish people.
We assist American victims of terrorism in vindicating their rights under the law, and seek to hold terrorists and sponsors of terrorism accountable for their actions.
We fight anti-Semitism and anti-Israel bias in the media and on college campuses.
We strive to enforce existing law and also to create new law in order to safeguard the rights of the Jewish people in the United States and Israel.
Our Mission
ZOA STATEMENT
The ZOA speaks out for Israel – in reports, newsletters, and other publications. In speeches in synagogues, churches, and community events, in high schools and colleges from coast to coast. In e-mail action alerts. In op-eds and letters to the editor. In radio and television appearances by ZOA leaders. Always on the front lines of pro-Israel activism, ZOA has made its mark.
Related Articles
OP-ED ZOA Praises ADL, AJC Call For Further Review of Hagel’s Record – AIPAC & Others Silent