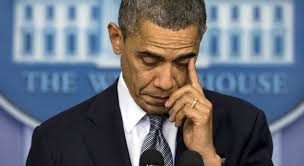 The Zionist Organization of America (ZOA) regards it as nothing less than a disgrace that President Barack Obama, in a short, emotionless statement, equated yesterday’s intentional barbaric murder of Jews in Jerusalem, who were hacked to death while praying in a synagogue, with the deaths of Palestinian Arabs killed in a war – initiated and maintained by them.

The ZOA is horrified by this bestial, revolting act of multiple murder. It deeply mourns the deaths of the slaughtered worshipers, which has left four widows and 24 children without their fathers, while Abbas continues to incite violence and Palestinians dance in the streets and hand out sweets.

Despite rightly calling this a “horrific attack,” President Obama’s words — “Tragically, this is not the first loss of life that we have seen in recent months. Too many Israelis have died. Too many Palestinians have died … I think it’s important for both Palestinians and Israelis to try to work together to lower tensions and to reject violence” — were an exercise in unacceptable moral equivalence. The ZOA strongly supports — as should President Obama — Israel’s efforts to protect its citizens and hunt down the perpetrators of recent attacks, but not imply that such efforts are part of the “violence” that must “lowered.”

Yesterday, in contrast, President Obama condemned the beheading of an American by the Islamic State as “an act of pure evil.” He did not absurdly dilute that statement by saying that too many Americans as well as too many Middle Easterners were dying, and that everyone must lower their level of violence.

President Obama also said — misleadingly — that Palestinian Authority (PA) president Mahmoud Abbas “has strongly condemned the attacks.” Yet, President Obama ignored Abbas’ statement after the murder where he demanded an end to the invasions of the Al Aqsa Mosque, the provocations of the settlers, and the incitement on the part of several Israeli ministers.” This false equivalence and lies about “invasions” of the Al Aqsa Mosque render Abbas’ condemnation false and meaningless.

The truth is that Abbas uttered a statement of condemnation when under pressure from Secretary of State John Kerry, and only after several days of the most flagrant and vicious incitement by him personally, and his PA officials.

ZOA National President Morton A. Klein said, “It is unconscionable for President Obama to completely ignore Abbas/PA’s vocal promotion of this terrorism over successive days and weeks, while only taking note of a single, clearly forced, insincere statement of condemnation by Abbas, which was immediately followed by a verbal attack against Israel.

“Abbas has not only praised those who have set out to murder Jews, but he and the PA have circulated lies about Israel working to endanger or destroy the Al Aqsa mosque and other Muslim sanctuaries in Jerusalem. That is nothing other than religious incitement to violence.

“And we utterly reject perpetuating the falsehood that this terrorism we are seeing worldwide, and particularly this terrorism directed at Israel, has nothing whatever to do with Islam.”

“Particularly in recent weeks, Mahmoud Abbas and other PA officials have praised attacks on Jews and called their perpetrators “martyrs.”

“The world has ignored this PA incitement, as well its unity agreement with the Hamas terrorist organization. This has encouraged the PA to champion the murder of Jews.

“President Obama, who has greatly increased aid to Abbas’ PA during his presidency to approximately $500 million annually, including $47 million that went to Hamas during the recent Gaza war, must immediately and publicly condemn Abbas for this poisonous, bellicose incitement to hatred and murder and demand that it cease immediately.

“Abbas and the PA must explicitly repudiate their support and approval of these acts of terrorism against Jews.

“It is unrealistic to expect that this will happen without the strongest international, including American, pressure on Abbas and the PA. U.S. taxpayer-funded aid to the PA should be terminated forthwith until this is forthcoming, as the ZOA has been calling for for years.

“It is also necessary that there be a genuine reformation in the world of Islam.

“We praise those brave imams and other genuine, moderate Muslims who revile and repudiate this terrorism and seek to build an Islamic community that does not wage war and terrorism on Israel and other non-Muslim polities.

“We caution everyone against rashly embracing Muslim extremists who utter carefully calculated and calibrated condemnations of terrorism while promoting radical Islam and radical Islamic terrorist groups.

“And we utterly reject perpetuating the falsehood that this terrorism we are seeing worldwide, and particularly this terrorism directed at Israel, has nothing whatever to do with Islam. Tragically, it does.

“Let’s stop fooling ourselves. This is clearly a religious war, waged by the PA and Hamas and other Palestinian terrorist organizations –– not a war about territory, refugees, prospective borders or any other bill of particulars.

“Anyone who proposes that Israel continue to give land to set up a PA state, or even negotiate under prevailing conditions with Abbas’ PA is ignorant, refusing to recognize the basic reality that this is an Arab/Muslim war seeking Israel’s destruction and the murder of Jews.

“It is therefore unconscionable for President Obama to ignore the blatant and vicious incitement to hatred and murder by Mahmoud Abbas. He should state in plain terms that the U.S. will terminate all aid to the PA if appropriate condemnation and repudiation of these terrorists, their murderous acts, repudiation of the PA’s alliance with the Hamas terrorist organization, and the dismantling of the whole PA apparatus of terrorism incitement are not forthcoming.”

We would love to hear from you! Please fill out this form and we will get in touch with you shortly.
Trending Z
Uncategorized November 19, 2014
FLASH: ISRAEL-JORDAN PEACE TREATY (1994) GUARANTEES JEWS ACCESS TO THE TEMPLE MOUNT – LET MY PEOPLE PRAY
Uncategorized November 19, 2014
ZOA Analysis: Most American Rabbis Who Are Boycotting Some Israeli Ministers Are From Extremist Left Wing Groups (J Street; T’ruah; JVP)
Uncategorized November 19, 2014
Israel’s “Right of Return” Grandparent Clause is De-Judaizing the Jewish State – Eliminate It
Uncategorized November 19, 2014
Exclusive: ZOA Accuses Ilhan Omar of Hating the U.S. ‘as Much as Israel,’ Lauds Kevin McCarthy for ‘Throwing Her Off the HFAC’
Center for Law & Justice
We work to educate the American public and Congress about legal issues in order to advance the interests of Israel and the Jewish people.
We assist American victims of terrorism in vindicating their rights under the law, and seek to hold terrorists and sponsors of terrorism accountable for their actions.
We fight anti-Semitism and anti-Israel bias in the media and on college campuses.
We strive to enforce existing law and also to create new law in order to safeguard the rights of the Jewish people in the United States and Israel.
Our Mission
ZOA STATEMENT
The ZOA speaks out for Israel – in reports, newsletters, and other publications. In speeches in synagogues, churches, and community events, in high schools and colleges from coast to coast. In e-mail action alerts. In op-eds and letters to the editor. In radio and television appearances by ZOA leaders. Always on the front lines of pro-Israel activism, ZOA has made its mark.
Related Articles
OP-ED Fmr. Secy. Colin Powell: Defense Dept. Influences Presidential Policy