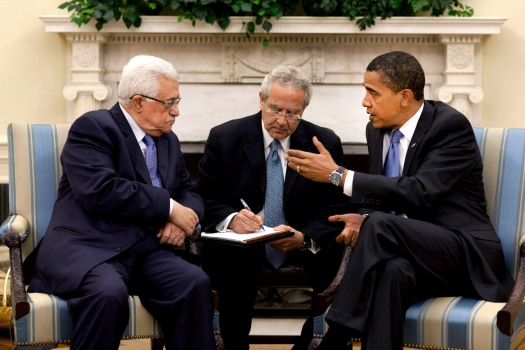 Abbas’ Top Religious Adviser: “All Of This Land Will Return To Us”
News Press Release

The Zionist Organization of America (ZOA) today condemned the latest statements of Holocaust-denying, terrorist-promoting Palestinian Authority (PA) dictator Mahmoud Abbas’ adviser on religious and Islamic affairs, PA Supreme Sharia Judge, Mahmoud Al-Habbash, for stating in his latest Friday sermon that Israel will disappear and that “all of this land will return to us.”

Al-Habbash said in the sermon, “All of this land will return to us, all our occupied land, all our rights in Palestine – our state, our people’s heritage, our ancestors’ legacy – all of it will return to us even if it takes time. Patience is the key to victory, and we are patient. In terms of resistance, all options are on the table, and in terms of diplomacy as well.” (Official PA Television, December 12, 2014, translation in ‘Abbas’ advisor: All of “Palestine” will “return” to Palestinians through “resistance,”’ Palestinian Media Watch (PMW) bulletin, December 16, 2014).

“It is truly remarkable that the clear objectives of dictator Abbas and his PA to promote terror, destroy Israel, and subvert peace can possibly be ignored, as it is by President Obama and virtually all other governments.”

Al-Habbash has a long record of anti-peace, extremist pronouncements, including stating last October that, “The entire land of Palestine is waqf and is blessed land… it is prohibited to sell, bestow ownership or facilitate the occupation [i.e. Israel] of even a millimeter of it.”

He also said in September, “What are we [Fatah and Hamas] divided about? Do we disagree about Jerusalem, for example? [Do we] disagree about liberating Palestine from the [Jordan] River to the [Mediterranean] Sea?”

ZOA National President Morton A. Klein said, “It is truly remarkable that the clear objectives of dictator Abbas and his PA to promote terror, destroy Israel, and subvert peace can possibly be ignored, as it is by President Obama and virtually all other governments.

“If the PA’s senior Sharia authority and dictator Abbas’ chief religious adviser openly preaches that Israel must and will disappear and that every inch of the land of Israel belongs to the Palestinian Arabs, then no genuine peace settlement is ever possible. Why then, on earth would President Obama call Abbas a peace-maker and give U.S. tax-payer funds to the PA?

“Why instead does President Obama condemn Israel as anti-peace when it build homes for Jews in Jewish neighborhoods of Jerusalem that will remain under Israeli rule under any conceivable peace agreement?

“President Obama has said that he will call on the PA to account for  incitement. He never has, but he could do so right now. If he doesn’t, the U.S. Congress certainly should.”

We would love to hear from you! Please fill out this form and we will get in touch with you shortly.
Trending Z
Uncategorized December 19, 2014
FLASH: ISRAEL-JORDAN PEACE TREATY (1994) GUARANTEES JEWS ACCESS TO THE TEMPLE MOUNT – LET MY PEOPLE PRAY
Uncategorized December 19, 2014
ZOA Analysis: Most American Rabbis Who Are Boycotting Some Israeli Ministers Are From Extremist Left Wing Groups (J Street; T’ruah; JVP)
Uncategorized December 19, 2014
Israel’s “Right of Return” Grandparent Clause is De-Judaizing the Jewish State – Eliminate It
Uncategorized December 19, 2014
Exclusive: ZOA Accuses Ilhan Omar of Hating the U.S. ‘as Much as Israel,’ Lauds Kevin McCarthy for ‘Throwing Her Off the HFAC’
Center for Law & Justice
We work to educate the American public and Congress about legal issues in order to advance the interests of Israel and the Jewish people.
We assist American victims of terrorism in vindicating their rights under the law, and seek to hold terrorists and sponsors of terrorism accountable for their actions.
We fight anti-Semitism and anti-Israel bias in the media and on college campuses.
We strive to enforce existing law and also to create new law in order to safeguard the rights of the Jewish people in the United States and Israel.
Our Mission
ZOA STATEMENT
The ZOA speaks out for Israel – in reports, newsletters, and other publications. In speeches in synagogues, churches, and community events, in high schools and colleges from coast to coast. In e-mail action alerts. In op-eds and letters to the editor. In radio and television appearances by ZOA leaders. Always on the front lines of pro-Israel activism, ZOA has made its mark.
Related Articles
OP-ED BY: Morton A. Klein Hagel Blames Israel for Palestinian Terrorism