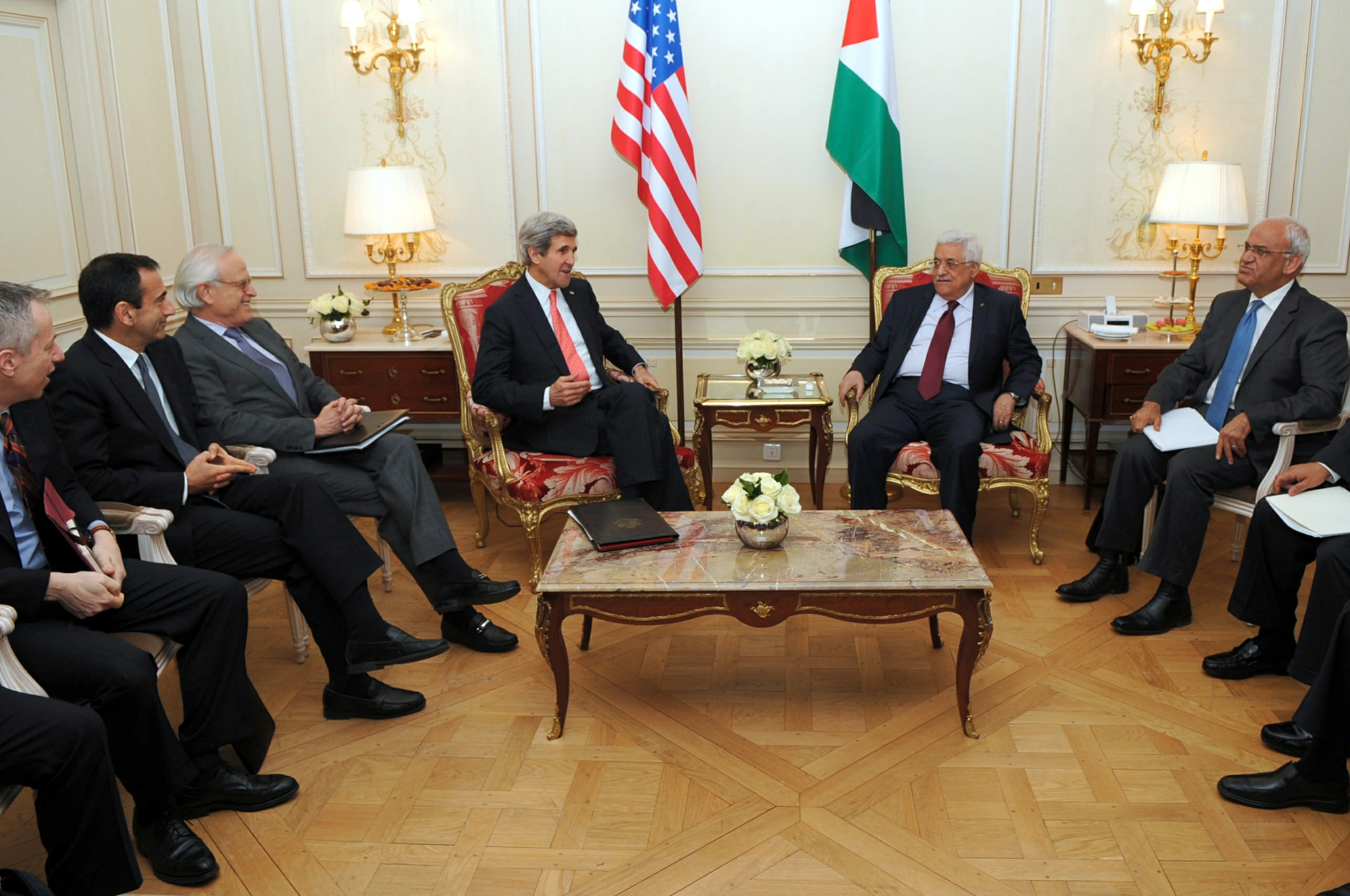 The Zionist Organization of America (ZOA) today called upon the Administration to act in accordance with US law and end aid to the Palestinian Authority (PA) immediately.  The last two weeks have seen outrageous actions by the leadership of the PLO, proposing unilateral changes to the borders of Israel in a failed UN Security Council resolution that was a material breach of the Oslo accords. The PA has also applied to join the International Criminal Court (ICC), where they will seek the prosecution of Israeli political and military leaders.

Many members of Congress feel that the PA’s attempt to join the ICC, from which it intends to continue its diplomatic onslaught against Israel, constitutes a violation of this law.

Under a new bill passed by Congress and signed by President Barack Obama last month, the Consolidated and Further Continuing Appropriations Act of 2015, it is US law (Public Law 113-235) that no funds may be given to the PA if “the Palestinians initiate an International Criminal Court (ICC) judicially authorized investigation, or actively support such an investigation, that subjects Israeli nationals to an investigation for alleged crimes against Palestinians.”

Many members of Congress feel that the PA’s attempt to join the ICC, from which it intends to continue its diplomatic onslaught against Israel, constitutes a violation of this law.  Additional legislation may be needed to clarify that there is no allowable wiggle room for the PA to join the ICC and continue to receive US aid – even though it has not filed its first case. The ZOA urges Congress to immediately enact legislation to eliminate any interpretation errors by the Administration.

There are other significant reasons to end the aid to the PA. Current US law requires that funding be cut off if the PA enters into a coalition with HAMAS, the Islamic terrorist group – that has been in a partnership with the PA since April, 2014.

The incitement to murder Jews and Israelis on the Fatah website, (the largest PLO faction, run by Abbas) by the leaders of the PA continues on a constant basis. The latest example is a poster on the Fatah Facebook site displaying a pile of skulls of dead Jews with the Fatah flag flying above the grisly display.

Al-Habbash spoke these words in the sermon, “All of this land will return to us, all our occupied land, all our rights in Palestine – our state, our people’s heritage, our ancestors’ legacy – all of it will return to us even if it takes time. Patience is the key to victory, and we are patient. In terms of resistance, all options are on the table and in terms of diplomacy as well.” (Official PA Television, December 12, 2014, translation in ‘Abbas advisor: All of Palestine return to Palestinians through resistance,“‘ Palestinian Media Watch (PMW) bulletin, December 16, 2014).

For over 20 years the Palestinian Arabs have not fulfilled any of their obligations under the peace agreements they signed, yet the US continues to fund the PA with about $600 million annually, of which about $440 million is direct aid. Total funding since 1994 exceeds $5 billion.

The the long record of failure of US engagement with the Palestinian Arabs continues.

Since 1994 the PA has failed to fulfill any of its binding obligations, including ending the promotion of hatred and the murder of Jews and Israelis in the PA-controlled media, in speeches by officials, in mosques, in schools and youth camps. PA leadership have refused to show or mark the existence of Israel on maps produced by the PA, and instead use a Fatah emblem showing all of Israel covered by a Kaffieh in the colors of the Palestinian flag. For Fatah’s 50th anniversary celebration marking their first taking of Jewish blood, they released a new emblem, featuring a grenade.

The PA has failed to imprison anti-Israel terrorists, and to outlaw terrorist groups such as Hamas and the al-Aqsa Martyrs’ Brigades (the military wing of PA President Mahmoud Abbas’ Fatah party). They have failed to extradite terrorists to Israel.

The PA must undo the naming of hundreds of schools, streets, and sports teams named in honor of terrorists who indiscriminately kill civilian Jews. They must stop printing posters honoring suicide bombers, hanging them all over schools and universities. They must stop having parades honoring the worst of the terrorist murders. These intolerable terrorist-honoring practices glorify murder, and encourage young Palestinians to become ruthless killers.

ZOA National President Morton A. Klein said, “It is truly remarkable that the clear objectives of dictator Abbas and his PA to promote terror, destroy Israel, and subvert peace can possibly be ignored, as it is by President Obama and virtually all other national governments. The time has come to tell the truth about this horrible gang of terrorists, and at last make them pay a price for working against peace and American interests in the region. US law requires that no aid be given to the PA from the moment they begin to pursue a case against Israel in the ICC. Why would the US want to subsidize actions by this hate-filled regime that works against the interests of US diplomacy?

For the PA to contravene new US law, signed just last week, and move forward with their attempt to join the ICC is a subversion of international law. It is a clear attempt to pressure Israel in the ultimate act of disrespect. This PA regime is in the 10th year of their so-called 4-year term.  US Aid must be stopped at once. If the administration does not act immediately, Congress should demand the US enforce the law, and pass new legislation as needed.”

We would love to hear from you! Please fill out this form and we will get in touch with you shortly.
Trending Z
Uncategorized January 7, 2015
FLASH: ISRAEL-JORDAN PEACE TREATY (1994) GUARANTEES JEWS ACCESS TO THE TEMPLE MOUNT – LET MY PEOPLE PRAY
Uncategorized January 7, 2015
ZOA Analysis: Most American Rabbis Who Are Boycotting Some Israeli Ministers Are From Extremist Left Wing Groups (J Street; T’ruah; JVP)
Uncategorized January 7, 2015
Israel’s “Right of Return” Grandparent Clause is De-Judaizing the Jewish State – Eliminate It
Uncategorized January 7, 2015
Exclusive: ZOA Accuses Ilhan Omar of Hating the U.S. ‘as Much as Israel,’ Lauds Kevin McCarthy for ‘Throwing Her Off the HFAC’
Center for Law & Justice
We work to educate the American public and Congress about legal issues in order to advance the interests of Israel and the Jewish people.
We assist American victims of terrorism in vindicating their rights under the law, and seek to hold terrorists and sponsors of terrorism accountable for their actions.
We fight anti-Semitism and anti-Israel bias in the media and on college campuses.
We strive to enforce existing law and also to create new law in order to safeguard the rights of the Jewish people in the United States and Israel.
Our Mission
ZOA STATEMENT
The ZOA speaks out for Israel – in reports, newsletters, and other publications. In speeches in synagogues, churches, and community events, in high schools and colleges from coast to coast. In e-mail action alerts. In op-eds and letters to the editor. In radio and television appearances by ZOA leaders. Always on the front lines of pro-Israel activism, ZOA has made its mark.
Related Articles
OP-ED Egypt’s Morsi: “We Must Not Forget To Nurse Our Children And Grandchildren On Hatred Towards Zionists And Jews,” The “Descendants Of Apes and Pigs”