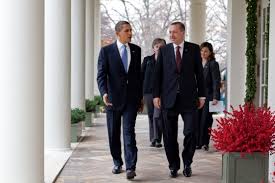 The Zionist Organization of America (ZOA) has condemned the latest vile anti-Semitic remarks of Turkish President Recep Tayyip Erdogan and called upon President Barack Obama to condemn them as well. This week, Erdogan took the occasion of Israeli Prime Minister Benjamin Netanyahu’s participating in a march of solidarity for victims of the recent Paris terrorist attacks by radical Muslim terrorists, to attack the Israeli leader, saying that he had no right to be at the rally due to the civilian casualties in Gaza during this past summer’s Operation Protective Edge.

Erdogan said, “I also hardly understand how he [Netanyahu] dared to go there. For once, you give an account for the children, women you massacred … How can you see this individual who carries out state terrorism by massacring 2,500 people in Gaza waving his hand … He is waving his hand as if people are very enthusiastically waiting for him.” Erdogan accused the West of holding double standards towards the Islamic world, making the surreal claim that historically Muslims were never on the side of terror nor did they perpetrate massacres. He claimed that racism, hate messages and ‘Islamaphobia’ stood behind the acts, hinting darkly that it was Israel who stood behind them, saying, “Take note that the acts of terror are not carried out in a vacuum. The acts follow a predetermined script and we should be alive to a plot against the Islamic world” (‘Erdogan attacks Netanyahu: How does head of terror state dare attend Paris march?,’ Jerusalem Post, January 12, 2015).

“Sadly, there is a long history of terrorism and massacres carried out by radical Muslims. Historically, too, huge mass slaughter accompanied many Muslim conquests, not least in India, where literally tens of millions of Hindus are estimated to have been killed.

ZOA National President Morton A. Klein said, “Erdogan has just declared that dark –– read Jewish –– forces stand behind the terrorist attacks in Paris. Erdogan, one of the few world leaders who openly and enthusiastically supports Hamas, an organization on both the US’s and EU’s list of terrorist groups, which calls in its Charter for the destruction of Israel and the global murder of Jews, refuses to acknowledge the fact when Muslim terrorists carry out massacres.

“Sadly, there is a long history of terrorism and massacres carried out by radical Muslims. Historically, too, huge mass slaughter accompanied many Muslim conquests, not least in India, where literally tens of millions of Hindus are estimated to have been killed.

“One of the distinctive features of anti-Semitism from other hatreds is that it alleges vast, global schemes of world domination by Jews endowed with evil, almost supernatural powers. Here, Erdogan defames Israel as a terrorist, rather than the real-life Hamas murderers he proudly supports, while blaming other jihadist terrorism in Paris on –– nudge nudge, wink, wink –– the Jews.

“As the ZOA has detailed previously, Erdogan has a long and revolting record of anti-Semitism, which includes having written, directed and performed in a 1974 play, Maskomya (an acronym for ‘Masons-Communists-Yahudi [Jews]’) which fixates on a world conspiracy founded in Judaism.

“It is nothing short of a disgrace that international leaders have not condemned Erdogan’s latest calumnies against Israel and the Jews. It is particularly so when the voice of the United States is not heard in this matter. We urge President Obama to condemn Erdogan’s vile anti-Semitic and anti-Israel remarks without any further delay.”

We would love to hear from you! Please fill out this form and we will get in touch with you shortly.
Trending Z
News January 22, 2015
Fox News Joins ZOA in Exposing ADL’s Dangerous, Extremist “Educational” Programs & Joins JNS Editor Tobin in Urging Firing ADL CEO Jonathan Greenblatt
Uncategorized January 22, 2015
U.S. Amb. to Israel Thomas Nides Endangers Israel’s Security & Interferes with Israeli Sovereignty, Violating International Law
Uncategorized January 22, 2015
JNS Op-Ed: ZOA Calls to Fire ADL Head After ‘Extremist Educational Programs’ Revealed
ZOA in the news January 22, 2015
ZOA Slams Extreme Anti-Israel Berkeley Law School Bylaw | Israel National News – Arutz Sheva
Center for Law & Justice
We work to educate the American public and Congress about legal issues in order to advance the interests of Israel and the Jewish people.
We assist American victims of terrorism in vindicating their rights under the law, and seek to hold terrorists and sponsors of terrorism accountable for their actions.
We fight anti-Semitism and anti-Israel bias in the media and on college campuses.
We strive to enforce existing law and also to create new law in order to safeguard the rights of the Jewish people in the United States and Israel.
Our Mission
ZOA STATEMENT
The ZOA speaks out for Israel – in reports, newsletters, and other publications. In speeches in synagogues, churches, and community events, in high schools and colleges from coast to coast. In e-mail action alerts. In op-eds and letters to the editor. In radio and television appearances by ZOA leaders. Always on the front lines of pro-Israel activism, ZOA has made its mark.
Related Articles
OP-ED Hearings Reveal More Hagel Horrors – U.S. Is “World’s Bully, Israel is War Criminal and Committed “Sickening Slaughter”