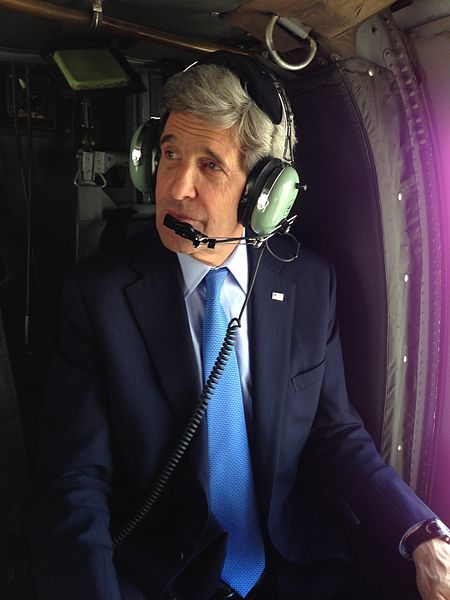 The Zionist Organization of America (ZOA) has expressed criticism of Secretary of State John Kerry support for the so-called Arab Peace Initiative. First sponsored by Saudi Arabia in 2002 and endorsed the Arab League, the Arab Initiative demands, in return for Arab recognition and “normalized relations” – a vague proposition that avoids recognizing Israel as a Jewish state – Israel’s withdrawal to the 1949 armistice lines; the creation of a Palestinian state with the eastern half of Jerusalem as its capital; and the Israeli acceptance of the morally and legally baseless so-called ‘right of return’ by Palestinian Arab refugees of the 1948-49 war and their millions of descendants to Israel, thereby inundating Israel with hostile Arabs and ending its existence as a Jewish state.

ZOA National Chairman of the Board Dr. Michael Goldblatt said, “The ZOA is critical of Secretary Kerry’s action in welcoming the return of the Arab Initiative – even with the alteration permitting a ‘minor swap’ of territory that would diverge from the 1949 armistice lines – because the Arab Initiative is not genuine peace plan or offering.

“Under the terms of this ‘peace’ plan, Israel would have to surrender not only eastern Jerusalem with its holiest Jewish sites, but also all of Judea and Samaria, where over 400,000 Israeli Jews live, including the strategically vital Jordan Valley, as well as the Golan Heights.

“It is no coincidence that the ‘right of return’ is an essential element of the Initiative, as indicated by the passage in its text which rules out the resettlement of Palestinian refugees and their millions of descendants in any place other than within Israel. The Initiative rejects any substitute for the ‘right of return.’ It rejects all forms of Palestinian patriation [sic] which conflict with the special circumstances of the Arab host countries’ – meaning the rejection of the settling of the refugees and their descendants in neighboring Arab countries and the granting of citizenship to them.

“All previous Israeli governments have rejected the legally and morally baseless ‘right of return’ as unacceptable and incompatible with Israel’s continued existence as a Jewish state, yet the Arab League has repeatedly refused to alter this all-important clause in any way.

“Clearly, there is no acceptance of Israel in a plan that envisages Israel inundated by hostile Arabs and reduced to indefensible borders. It is nothing other than a plan to see Israel destroyed by weakening and reducing her in size, depriving her of vital strategic territory and her Jewish majority, thus enabling Arab states to avoid coming to a genuine peace with her. As such, it is no different from arch-terrorist Yasser Arafat’s ‘stages plan,’ whereby Israel was to be destroyed by wresting concessions from Israel, setting up a Palestinian regime on territory vacated by Israel and continuing the war to destroy her from these improved positions.

“Lastly, the plan does not even speak of ending Palestinian Arab terrorism and incitement to hatred and murder against Israel.

“Secretary Kerry’s enthusiasm for the Arab Initiative is misplaced. Negotiations that lead to a genuine peace can only come when the Palestinians fulfill their signed obligations under the Oslo to end terrorism, arrest terrorists, outlaw terrorist groups and end the incitement to hatred and murder that feeds the conflict.”

We would love to hear from you! Please fill out this form and we will get in touch with you shortly.
Trending Z
Uncategorized May 2, 2013
ZOA Analysis: Most American Rabbis Who Are Boycotting Some Israeli Ministers Are From Extremist Left Wing Groups (J Street; T’ruah; JVP)
Uncategorized May 2, 2013
ZOA: Israel’s Reasonable Judicial Reform Proposals Are Good for Democracy, the Rule of Law and the Economy
News May 2, 2013
ZOA is Disappointed, Offended and Frightened by 211 U.S. House Votes Supporting Jew-Hating, Israel-Hating Rep. Ilhan Omar
Uncategorized May 2, 2013
Israel’s “Right of Return” Grandparent Clause is De-Judaizing the Jewish State – Eliminate It
Center for Law & Justice
We work to educate the American public and Congress about legal issues in order to advance the interests of Israel and the Jewish people.
We assist American victims of terrorism in vindicating their rights under the law, and seek to hold terrorists and sponsors of terrorism accountable for their actions.
We fight anti-Semitism and anti-Israel bias in the media and on college campuses.
We strive to enforce existing law and also to create new law in order to safeguard the rights of the Jewish people in the United States and Israel.
Our Mission
ZOA STATEMENT
The ZOA speaks out for Israel – in reports, newsletters, and other publications. In speeches in synagogues, churches, and community events, in high schools and colleges from coast to coast. In e-mail action alerts. In op-eds and letters to the editor. In radio and television appearances by ZOA leaders. Always on the front lines of pro-Israel activism, ZOA has made its mark.
Related Articles
OP-ED BY: Morton A. Klein, ZOA Report Claims Obama States Israel Won’t Make Concessions