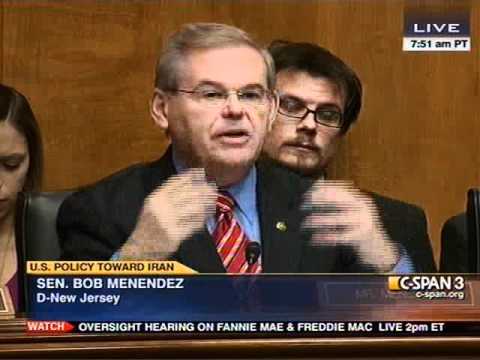 Last week, 10 Senate Democrats who had persistently expressed concern over President Barack Obama’s concessionary policy toward Iran over its nuclear weapons program, announced via a letter to the President that they would desist from seeking to pass new legislation to reimpose sanctions in the event of a failure in nuclear talks. Under reportedly enormous pressure from the White House, the senators said that they would await the March 24 deadline for a negotiated agreement with Tehran, despite their doubts that any such agreement would be forthcoming.

This delay is a serious mistake, because one of the few things that might induce Tehran to agree to terminating its nuclear weapons program would be the certainty of renewed tough sanctions if it did not do so. Now such pressure is absent, and the chances of Iran agreeing are correspondingly reduced.

Obama has a disturbing record on Iran sanctions.

But this is only the latest blow to diplomatic efforts to prevent Iran becoming a nuclear threshold power. The fact is that President Obama has a six year record of indulging and conceding to Iran, without having achieved anything to prevent it becoming a nuclear power, which he’s repeatedly and publicly proclaimed he would do “everything, everything” to prevent.

Obama could have availed himself of the huge demonstrations in Iran following the rigged 2009 presidential elections that confirmed the genocide advocate Mahmoud Ahmadinejad in power to concert international pressure on the regime. He could have even called for the regime to step aside –– as he did in 2011 when American ally, Egyptian President Hosni Mubarak was similarly assailed by mass protests. Instead, he refused, saying that it was “not productive” to be be “meddling … in Iranian elections.”

Obama has a disturbing record on Iran sanctions. For over a year after entering office, he prohibited a Congressional vote on new sanctions. Moreover, the 2010 UN Security Council sanctions regime Obama eventually supported included huge exemptions for numerous countries, like China, which has extensive contracts in Iran’s energy sector developing oil refineries, and Russia, which supplies S-300 surface-to-air missiles to Iran.

In 2011, Obama sought to torpedo or weaken new and stronger Congressional sanctions on Iran, even after these had been softened at his request, leading Senator Bob Menendez (D-NJ), then Chairman of the Senate Foreign Relations Committee, to publicly and angrily criticize the Administration.

In 2013, Obama quietly lifted financial pressure on Tehran, stopping the blacklisting of entities and individuals assisting Iran’s evasion of international sanctions. He also damagingly publicized Israeli preparations to deal militarily with Iran, including Israel use of Azerbaijan airfields.

Then came the biggest subversion of the cause of keeping Iran nuclear weapon-free: the Geneva Interim Agreement with Iran, which gave Tehran vital sanctions relief totaling some $20 billion (not the $6-7 billion originally conceded by the Administration) while permitting Iran to retain – intact – all the essential elements of its nuclear weapons program:

So, too, with Iranian threats to the U.S. and Israel. Statements continue to be made by Khamenei and other senior Iranian figures – Khameini publicly calling for destruction of the U.S., the “Great Satan.”  The Iranian Defense Ministry recently declared that “the Iranian nation still sees the U.S. as the No. 1 enemy.” And, Iran has been quietly expanding its reach in Latin America, courtesy of friendly regimes. Silence.

Instead, Obama fights proposed sanctions, which will only be imposed if there’s no nuclear deal, and is outraged that Israeli Prime Minister Benjamin Netanyahu accepts an invitation to address the Congress on the subject, a record which even led Senator Menendez to declare, “the more I hear from the Administration … the more it sounds like talking points that come straight out of Tehran.”

Perhaps Obama believes a nuclear Iran will be a source of stability. Perhaps he thinks an America that cannot threaten a nuclear Iran is good news. But what cannot be argued is that Obama intends to stop Iran from becoming a nuclear threshold state.

Morton A. Klein is National President of the Zionist Organization of America (ZOA). Dr. Daniel Mandel is Director of the ZOA’s Center for Middle East Policy.

We would love to hear from you! Please fill out this form and we will get in touch with you shortly.
Trending Z
Uncategorized February 2, 2015
ZOA Analysis: Most American Rabbis Who Are Boycotting Some Israeli Ministers Are From Extremist Left Wing Groups (J Street; T’ruah; JVP)
Uncategorized February 2, 2015
ZOA: Israel’s Reasonable Judicial Reform Proposals Are Good for Democracy, the Rule of Law and the Economy
Uncategorized February 2, 2015
Israel’s “Right of Return” Grandparent Clause is De-Judaizing the Jewish State – Eliminate It
News February 2, 2015
ZOA is Disappointed, Offended and Frightened by 211 U.S. House Votes Supporting Jew-Hating, Israel-Hating Rep. Ilhan Omar
Center for Law & Justice
We work to educate the American public and Congress about legal issues in order to advance the interests of Israel and the Jewish people.
We assist American victims of terrorism in vindicating their rights under the law, and seek to hold terrorists and sponsors of terrorism accountable for their actions.
We fight anti-Semitism and anti-Israel bias in the media and on college campuses.
We strive to enforce existing law and also to create new law in order to safeguard the rights of the Jewish people in the United States and Israel.
Our Mission
ZOA STATEMENT
The ZOA speaks out for Israel – in reports, newsletters, and other publications. In speeches in synagogues, churches, and community events, in high schools and colleges from coast to coast. In e-mail action alerts. In op-eds and letters to the editor. In radio and television appearances by ZOA leaders. Always on the front lines of pro-Israel activism, ZOA has made its mark.
Related Articles
OP-ED BY: Lee S. Bender ZOA Philly Leader Spearheads Effort to Honor Liberators Who Re-Birthed Israel