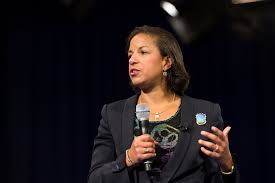 In an interview on the PBS television’s ‘Charlie Rose’ program, President Obama’s National Security Advisor, Susan Rice, said that Israeli Prime Minister Benjamin Netanyahu’s accepting an invitation to speak to Congress about the Iranian nuclear program and radical Islamic terrorism quote “is not only unfortunate. I think it’s destructive of the fabric of the [U.S./Israel] relationship.”

But Mr. Netanyahu’s acceptance of this major podium is not partisanship. Time is of the essence. A deal with Iran is going to be signed by the end of March. To speak in April or May will be too late. That’s why the Israeli Prime Minister must speak now to make the potential danger of what a bad deal looks like more clear to the American Congress and the American people and energize them to work for an appropriate deal that will ensure that Iran will not be be capable of developing nuclear weapons. Millions of Israeli Jewish and Arabs lives are at stake, as well as American and European lives. Remember –– the inter-continental ballistic missiles (ICBMs) Iran is developing will be able to reach, not only Israel and Europe, but America as well. And the only purpose of these ICBMs is to carry nuclear warheads. Iranian rallies regularly feature signs and chanting of ‘Death to America,’ ‘America is the Great Satan,’ while the Iranian Defense Ministry called the U.S. ‘the Number One enemy’ in a report issued in November 2014. Benjamin Netanyahu is determined to save American as well as Israeli lives.

Harvard Law Professor, Alan Dershowitz, a liberal Democrat who twice campaigned for President Obama, wrote this week in the Wall Street Journal, “Congress has every right to invite, even over the president’s strong objection, any world leader or international expert who can assist its members in formulating appropriate responses to the current deal being considered with Iran regarding its nuclear-weapons program … no legal scholar can dispute that Congress has the power to act independently of the president in matters of foreign policy … Inviting a prime minister of an ally to educate Congress about a pressing foreign-policy decision is in the highest tradition of our democratic system of separation of powers and checks and balances.”

Former Secretary of Defense Donald Rumsfeld noted that, “the comments by Susan Rice reflect a misunderstanding of our system of government and our Constitution … Certainly there is a role for the Congress in foreign policy and national security affairs, Iran is a critical issue and Israel is an important ally and there is nothing inappropriate at all for the Speaker to invite the Prime Minister or for the Prime Minister to come over. Historically, he is a good friend of the U.S., he is a supporter of the relationship between our two countries and I find it stunning to see the comments out of the White House on this issue.” Rumsfeld also said that the Administration was making a big mistake” in treating Netanyahu so poorly. “It is not in our interest, and its not in Israel’s interest, and I would add it is not in the region’s interest.”

The American public overwhelmingly supports the appropriateness of Israeli Prime Minister Netanyahu speaking to Congress by 59% to 23%, according to a recent McLaughlin poll. After all, the issue of the Nazi-like radical Islamic terrorist regime of Iran getting nuclear weapons and the issue of Islamic terrorism is of great concern to Americans as well as Israelis.

Yesterday it was announced that, instead of the President, Vice President, or Secretary of State, one of whom who would normally address AIPAC, Susan Rice, the National Security Adviser, will address the AIPAC Conference.

But should a major Jewish pro-Israel group like AIPAC ignore Rice’s vicious comments against the Jewish state of Israel and the Israeli Prime Minister and welcome her appearance and give her a podium? Is Susan Rice entitled to such respect from the Jewish community? As Breitbart.com has observed, inviting Susan Rice, given her recent statement, is “a slap in the face” by Obama.

Should there be no consequences for her threats that the U.S./Israeli relations are now badly damaged, even destroyed? Should AIPAC on bended knee welcome Susan Rice and humiliate themselves and the Jewish people?

Would the NAACP give a podium to a U.S. government official who said that the actions of the head of the NAACP have been “destructive to Black-White relations,” especially when those actions were appropriate and understandable and were taken to try and protect the lives of African-Americans and others?

In similar circumstances, would a major Hispanic or gay or Muslim organization give a podium to such a person at their major conference?

The ZOA simply asks the officials at AIPAC to search their souls as to whether this is the right thing to so. Does AIPAC’s action show self-respect, does it bring honor to the Jewish people they represent? Or is it humiliating and wrong?

We would love to hear from you! Please fill out this form and we will get in touch with you shortly.
Trending Z
Uncategorized February 27, 2015
ZOA Analysis: Most American Rabbis Who Are Boycotting Some Israeli Ministers Are From Extremist Left Wing Groups (J Street; T’ruah; JVP)
Uncategorized February 27, 2015
ZOA: Israel’s Reasonable Judicial Reform Proposals Are Good for Democracy, the Rule of Law and the Economy
News February 27, 2015
ZOA is Disappointed, Offended and Frightened by 211 U.S. House Votes Supporting Jew-Hating, Israel-Hating Rep. Ilhan Omar
Uncategorized February 27, 2015
Israel’s “Right of Return” Grandparent Clause is De-Judaizing the Jewish State – Eliminate It
Center for Law & Justice
We work to educate the American public and Congress about legal issues in order to advance the interests of Israel and the Jewish people.
We assist American victims of terrorism in vindicating their rights under the law, and seek to hold terrorists and sponsors of terrorism accountable for their actions.
We fight anti-Semitism and anti-Israel bias in the media and on college campuses.
We strive to enforce existing law and also to create new law in order to safeguard the rights of the Jewish people in the United States and Israel.
Our Mission
ZOA STATEMENT
The ZOA speaks out for Israel – in reports, newsletters, and other publications. In speeches in synagogues, churches, and community events, in high schools and colleges from coast to coast. In e-mail action alerts. In op-eds and letters to the editor. In radio and television appearances by ZOA leaders. Always on the front lines of pro-Israel activism, ZOA has made its mark.
Related Articles
OP-ED ZOA Israel Director Asks U.S. Ambassador Shapiro to Recommend Changes for Presidential Visit