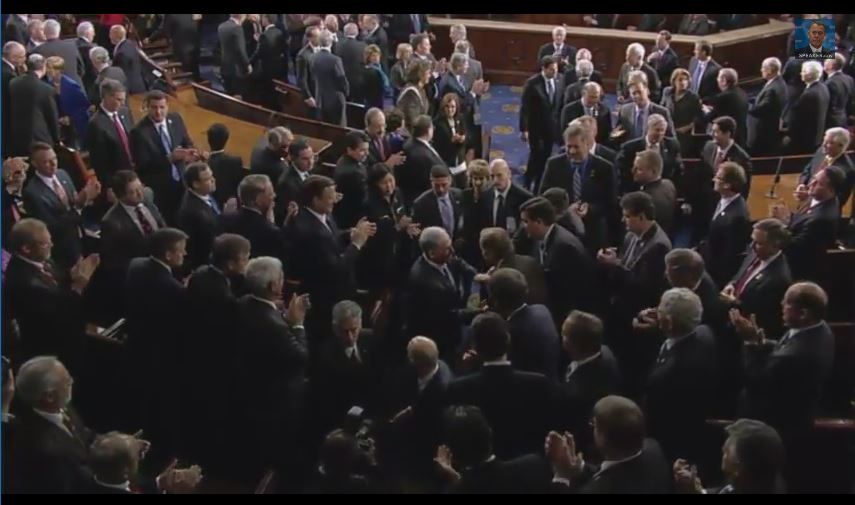 The Zionist Organization of America (ZOA) has applauded Israeli Prime Minister Benjamin Netanyahu on his masterful, powerful and effective address today to a joint meeting of the U.S. Congress on the threat posed by a nuclear armed Iran and the perils of an apparent, dangerous and deeply flawed deal with Iran that permits it to become a nuclear threshold state.

ZOA National President Morton A. Klein said, “Prime Minister Netanyahu’s speech was a very powerful and effective one and we applaud him for delivering it. It is likely that President Barack Obama is unhappy with it, particularly for its detailed exposure of the defectiveness of the proposed nuclear deal currently being negotiated in Switzerland, one that will leave Iran with the ability to become a nuclear threshold state and, after the agreement’s lapse in ten years, a full, nuclear powerhouse.
After all, the day Iran becomes a nuclear power, America, Europe sand the whole world will be obliged to live under the  shadow of nuclear blackmail.
“In his speech, Prime Minister Netanyahu correctly emphasized the dangers of a nuclear Iran for Israel. He was incisive in noting the failures of diplomacy and inherent limitations of inspections with North Korea that enabled it to become a nuclear power and how these mistakes are being repeated now in the case of Iran.
“The Prime Minister also pointed to the many dangerous and deeply flawed aspects of the the proposed nuclear agreement with Iran — the fact that its intercontinental ballistic missile (ICBMs) program remain untouched by the agreement, with Iran refusing to even discuss it in these negotiations; that Iran is seeking to massively expand its centrifuges from some 19,000 now to 190,000; and that many of its nuclear sites are either excluded from inspection or even unknown. These ICBMs will be able to reach the United States and their only purpose is to carry nuclear warheads. They are called ‘intercontinental’ for good reason — they’re designed to reach from one continent from another.
“The Prime Minister was also particularly insightful in observing that Iran may be an opponent of the Islamic State in Iraq & Syria (ISIS), but it remains a virulent enemy of the United States, Europe, Israel and the world.
“The fact is that Iran poses not only an existential threat to Israel, but also to the United States, something that the Prime Minister might have emphasized more strongly. After all, the day Iran becomes a nuclear power, America, Europe sand the whole world will be obliged to live under the  shadow of nuclear blackmail. The Middle East will become a scene of nuclear proliferation by several regimes — Egypt, Saudi Arabia and Turkey. And even if Iran never fires nuclear-tipped ICBMs at the U.S., who really believes Iran won’t give such weapons to terrorists? And who believes that, once having such weapons, terrorists won’t use them on the U.S.? And even if neither uses them, what unending series of concessions and retreats will America have to undertake to ensure that this continues?
“Prime Minister Netanyahu rightly said that Iran needs to do three things: stop its aggression against its neighbors in the Middle East; stop supporting terrorism around the world; and stop threatening to annihilate Israel. I would add two more: stop their outrageous human rights abuses, and stop threatening the United States with destruction and chanting ‘Death to America’ and calling the U.S. ‘the Great Satan.’ Few seem to know that the Iranian Defense Ministry produced a report last December declaring that “the Iranian nation still sees the U.S. as the No. 1 enemy.
“Another point that the Prime Minister might have made is that the Iranian regime of today is very similar to the the Nazi regime of of the 1930s and 1940s.”
Important excerpts from Prime Minister Netanyahu’s speech:
Get updates from ZOA We don’t spam. You will receive our unique content

We would love to hear from you! Please fill out this form and we will get in touch with you shortly.
Trending Z
Uncategorized March 4, 2015
FLASH: ISRAEL-JORDAN PEACE TREATY (1994) GUARANTEES JEWS ACCESS TO THE TEMPLE MOUNT – LET MY PEOPLE PRAY
Uncategorized March 4, 2015
ZOA Analysis: Most American Rabbis Who Are Boycotting Some Israeli Ministers Are From Extremist Left Wing Groups (J Street; T’ruah; JVP)
Uncategorized March 4, 2015
Israel’s “Right of Return” Grandparent Clause is De-Judaizing the Jewish State – Eliminate It
Uncategorized March 4, 2015
Exclusive: ZOA Accuses Ilhan Omar of Hating the U.S. ‘as Much as Israel,’ Lauds Kevin McCarthy for ‘Throwing Her Off the HFAC’
Center for Law & Justice
We work to educate the American public and Congress about legal issues in order to advance the interests of Israel and the Jewish people.
We assist American victims of terrorism in vindicating their rights under the law, and seek to hold terrorists and sponsors of terrorism accountable for their actions.
We fight anti-Semitism and anti-Israel bias in the media and on college campuses.
We strive to enforce existing law and also to create new law in order to safeguard the rights of the Jewish people in the United States and Israel.
Our Mission
ZOA STATEMENT
The ZOA speaks out for Israel – in reports, newsletters, and other publications. In speeches in synagogues, churches, and community events, in high schools and colleges from coast to coast. In e-mail action alerts. In op-eds and letters to the editor. In radio and television appearances by ZOA leaders. Always on the front lines of pro-Israel activism, ZOA has made its mark.
Related Articles
OP-ED BY: Morton A. Klein Hagel Blames Israel for Palestinian Terrorism