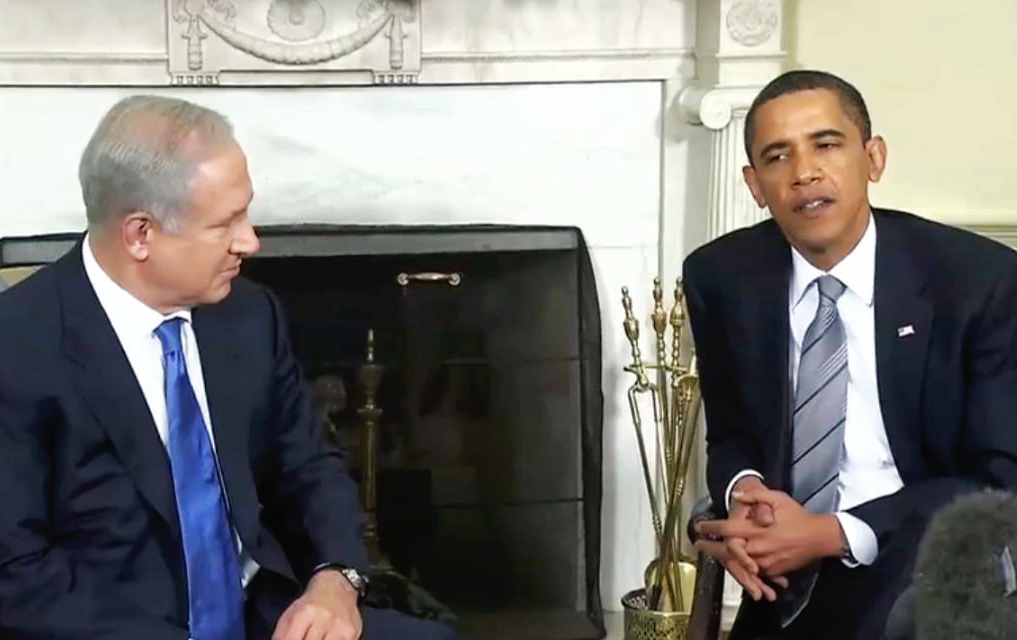 In a speech today at Adas Israel Synagogue in Washington, D.C., President Obama voiced his usual empty flowery platitudes about having Israel’s back and never allowing Iran to develop nuclear weapons, and even asserted that he was “an honorary member of the tribe” – while promoting policies that place a knife squarely in Israel’s back, and lying about his record and the Iran nuclear deal.

The President also referred to Judea and Samaria as Arab land in his speech – when the Jewish people have the greatest historical, political, religious and legal right to these areas.

The President’s platitudes were clearly meaningless:  In the next breath during his speech, Obama complained about Jewish “settlements” – which are in reality Jewish communities in historic Jewish land comprising less than 2% of Judea and Samaria, and promoted a Palestinian state – while ignoring the facts that the Palestinian Authority (PA) continues to promote anti-Jewish hatred in their schools, media and speeches, and that the PA is part and parcel of a unity government with the terrorist group Hamas, and that both the Hamas and PA President Abbas’ Fatah party’s charters call for Israel’s destruction.   President Obama also ignored the fact that the PA is attempting to use the UN to establish a unilateral state that does not recognize Israel, refuses to negotiate with Israel, and is determined to wipe Israel off the face of the map.  President Obama also said nothing about the PA paying pensions to terrorists who have killed Jews.

The President also referred to Judea and Samaria as Arab land in his speech – when the Jewish people have the greatest historical, political, religious and legal right to these areas.  After all, we are called Jews because we are from Judea.

The President also made the nonsensical statement:  “The rights of the Jewish people then compel me to think about a Palestinian child in Ramallah that feels trapped without opportunity.”  This is absurd in light of the fact that Israel has given away all of Gaza and almost half of Judea and Samaria, where the Palestinian Arabs run their own lives other than sharing security:  the Arabs have their own Parliament, schools, textbooks, newspapers, radio and TV stations, businesses and police force.

President Obama’s pretense that he has Israel’s back has been proven to be false time and again.  The Obama administration promoted Hamas’s one-sided demands for a cease fire during the Hamas war last summer which would have left Hamas’s terror tunnels intact; stopped rearming Israel during the war; stopped flights to Israel; declassified and revealed Israel’s nuclear secrets; leaked Israeli plans to destroy Iran’s nuclear weapons; and has repeatedly sought to decrease funding for Israel’s Iron Dome missile defense program, to name a few.

President Obama’s assertions about Iran in his speech were also belied by the facts.  For instance, Obama claimed that the deal with Iran has “already halted or rolled back parts of Iran’s nuclear program.”  In fact, Iran has dismantled no part of its nuclear program.  Instead, Iran has continued to enrich uranium, continued to develop advanced centrifuges and inter-continental ballistic missiles which can reach the United States, has maintained its Fordow and Arak nuclear plants, and has received tens of billions of dollars in sanctions relief.

In addition, the President has never once criticized Iran for repeatedly calling for Death to America and Death to Israel – in this speech or in any other.

The President also claimed to be interested in “a deal that imposes unprecedented inspections on all elements of Iran’s nuclear program, so that they can’t cheat.”  The President failed to mention that Iran’s leaders have insisted and reiterated again this week that Iran will forbid inspections of its military facilities (the most likely location for nuclear weapons), forbid its nuclear scientists from speaking with nuclear inspectors, and require 24 days from the time a suspected violation is reported before an inspection can occur – which gives Iran the time to move nuclear material and weapons to a new undisclosed location.

President Obama also promoted the myth of “snap back sanctions” when country after country and expert after expert says that this will not occur, and is indeed impossible, given the fact that it takes years to put sanctions into place.  Just last week, Russia’s UN Ambassador Vitaly Churkin flatly rejected the Obama administration’s claims that sanctions on Iran would be restored immediately if Iran violates the terms of the agreement.

The President also falsely claimed during his speech he wants a full discussion about how to stop Iran.  Yet, he lobbied Congress incessantly to “disinvite” Israeli Prime Minister Benjamin Netanyahu from speaking to Congress about the very same subject – how to stop Iran.  Obama also twisted Democrats’ arms to not attend PM Netanyahu’s speech, and fought against Congress having any say on the Iran deal.  The Obama administration also adamantly refused to treat the Iran deal as a treaty – which would require approval of two thirds of the Senate – despite the fact that virtually every past nuclear deal has been deemed a treaty.

The President’s refusal to require an Iranian commitment to end terrorism against Israel and America as a pre-requisite for sanctions relief, or as any part of the Iran deal, further confirms the reality that President Obama does not have Israel’s back – or America’s back – no matter what bromides he might utter at a Washington synagogue.  The President has even mocked those who sought to link an Iran deal to an end of Iranian terror.

We would love to hear from you! Please fill out this form and we will get in touch with you shortly.
Trending Z
Uncategorized May 26, 2015
ZOA Analysis: Most American Rabbis Who Are Boycotting Some Israeli Ministers Are From Extremist Left Wing Groups (J Street; T’ruah; JVP)
Uncategorized May 26, 2015
ZOA: Israel’s Reasonable Judicial Reform Proposals Are Good for Democracy, the Rule of Law and the Economy
News May 26, 2015
ZOA is Disappointed, Offended and Frightened by 211 U.S. House Votes Supporting Jew-Hating, Israel-Hating Rep. Ilhan Omar
Uncategorized May 26, 2015
Israel’s “Right of Return” Grandparent Clause is De-Judaizing the Jewish State – Eliminate It
Center for Law & Justice
We work to educate the American public and Congress about legal issues in order to advance the interests of Israel and the Jewish people.
We assist American victims of terrorism in vindicating their rights under the law, and seek to hold terrorists and sponsors of terrorism accountable for their actions.
We fight anti-Semitism and anti-Israel bias in the media and on college campuses.
We strive to enforce existing law and also to create new law in order to safeguard the rights of the Jewish people in the United States and Israel.
Our Mission
ZOA STATEMENT
The ZOA speaks out for Israel – in reports, newsletters, and other publications. In speeches in synagogues, churches, and community events, in high schools and colleges from coast to coast. In e-mail action alerts. In op-eds and letters to the editor. In radio and television appearances by ZOA leaders. Always on the front lines of pro-Israel activism, ZOA has made its mark.
Related Articles
OP-ED BY: ZOA Deeply Troubled That U.S. Senate Confirmed Iran/ Terror Group Apologist, Anti-Israel Hagel for Secy.