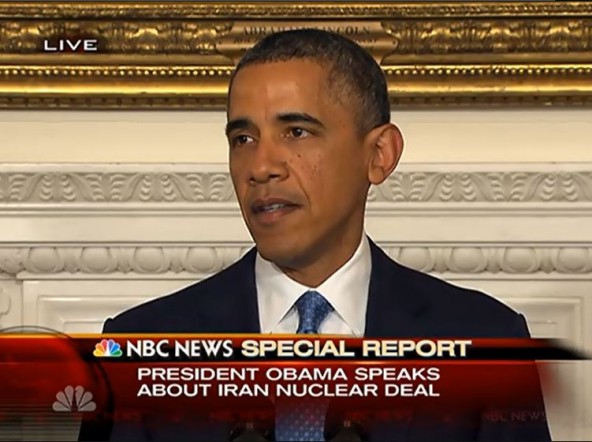 Pres. Obama Trying To Waive Even More Sanctions He Promised Would Remain In Place Under Nuclear Deal
News Press Release

The Zionist Organization of America (ZOA) has pointed to recent reports indicating that President Barack Obama, contrary to his explicit previous assurances, is considering waiving existing sanctions on the Islamic Republic of Iran for its support for terrorism, human rights abuses and ballistic missile programs.

On April 2, in his defense of the impending Iran nuclear deal, President Obama said that, while certain U.S. and UN sanctions on Iran would be lifted under the deal, “other American sanctions on Iran for its support of terrorism, its human rights abuses, its ballistic missile program, will continue to be fully enforced.” Indeed, the White House factsheet on the impending agreement also plainly states that these sanctions will be maintained under the deal.

Yet, according to an Associated Press report, “Administration officials vehemently reject that any backtracking is taking place, but they are lumping sanctions together differently from the way members of Congress and critics of the negotiations separate them … Officials say the administration can meet its obligations because of how it interprets nuclear sanctions. For example, they say measures designed to stop Iran from acquiring ballistic missiles are nuclear-related because they were imposed to push Iran into the negotiations. Also, they say sanctions that may appear non-nuclear are often undergirded by previous actions conceived as efforts to stop Iran’s nuclear program … The administration officials say all sanctions on the [Iranian Central Bank] are nuclear-related … [Treasury Secretary Jack] Lew told the Jewish conference in New York that a nuclear accord would include the suspension of all ‘secondary’ oil, trade and banking restrictions … Eliminating the secondary sanctions across the board could have wide-ranging implications, making it easier for Iran’s Revolutionary Guard Corps and its police, intelligence services and paramilitary groups to do business” (Bradley Klapper & Matthew Lee, ‘US finds peeling back the Iran sanctions onion no easy task,’ Associated Press, June 10, 2015).

“Administration officials vehemently reject that any backtracking is taking place, but they are lumping sanctions together differently from the way members of Congress and critics of the negotiations separate them.”

ZOA National President Morton A. Klein said, “It is deeply disturbing to discover that President Obama and his Administration, contrary to the President’s explicit assurance on April 2, is working to waive non-nuclear sanctions imposed on Iran for its support of terrorism worldwide, its massive and decades-long human rights abuses at home and its ballistic missile program.

“As we have stated repeatedly, the President’s proposed nuclear deal would be a disaster, giving Iran a clear path in 13 years to nuclear weapons, even if it adheres to the agreement. It would also be a disaster, because it will free billions of dollars for Iran to spend on promoting and supporting international terrorism, including terrorist organizations like Hamas and Hezbollah, and destabilizing the Middle East. Now it appears that even the non-nuclear sanctions that President Obama promised would be retained under the deal look like they are being neutered.

“This supplies but further evidence to a long record of President Obama poor judgment when it comes to radical Islamic movements and governments, of which the ZOA recently provided a long list of examples.

“The ZOA calls upon all pro-Israel organizations, Jewish and non-Jewish, to strongly and immediately demand of President Obama that non-nuclear sanctions against Iran remain in place.”

We would love to hear from you! Please fill out this form and we will get in touch with you shortly.
Trending Z
Uncategorized June 12, 2015
FLASH: ISRAEL-JORDAN PEACE TREATY (1994) GUARANTEES JEWS ACCESS TO THE TEMPLE MOUNT – LET MY PEOPLE PRAY
Uncategorized June 12, 2015
ZOA Analysis: Most American Rabbis Who Are Boycotting Some Israeli Ministers Are From Extremist Left Wing Groups (J Street; T’ruah; JVP)
Uncategorized June 12, 2015
Israel’s “Right of Return” Grandparent Clause is De-Judaizing the Jewish State – Eliminate It
Uncategorized June 12, 2015
Exclusive: ZOA Accuses Ilhan Omar of Hating the U.S. ‘as Much as Israel,’ Lauds Kevin McCarthy for ‘Throwing Her Off the HFAC’
Center for Law & Justice
We work to educate the American public and Congress about legal issues in order to advance the interests of Israel and the Jewish people.
We assist American victims of terrorism in vindicating their rights under the law, and seek to hold terrorists and sponsors of terrorism accountable for their actions.
We fight anti-Semitism and anti-Israel bias in the media and on college campuses.
We strive to enforce existing law and also to create new law in order to safeguard the rights of the Jewish people in the United States and Israel.
Our Mission
ZOA STATEMENT
The ZOA speaks out for Israel – in reports, newsletters, and other publications. In speeches in synagogues, churches, and community events, in high schools and colleges from coast to coast. In e-mail action alerts. In op-eds and letters to the editor. In radio and television appearances by ZOA leaders. Always on the front lines of pro-Israel activism, ZOA has made its mark.
Related Articles
OP-ED Fmr. Secy. Colin Powell: Defense Dept. Influences Presidential Policy