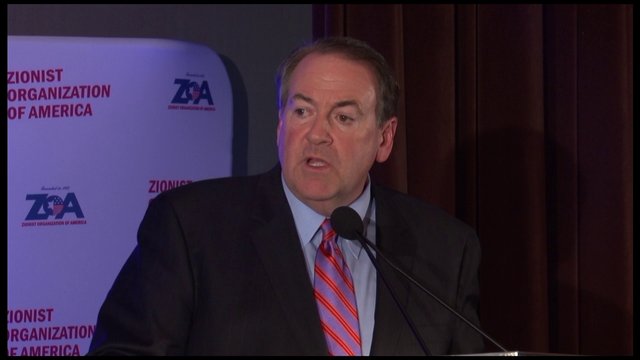 The ZOA is disappointed and perplexed by the pro-Israel Jewish National Fund (JNF) of Canada abruptly cancelling a scheduled speech by the extraordinarily pro-Israel presidential candidate Gov. Mike Huckabee.

The Canadian Jewish News reported that Huckabee’s “Oct. 15 speaking engagement in Ottawa was cancelled following objections from the Canadian Lesbian, Gay, Bisexual, Transgender, Queer (LGBTQ) community.”  (ZOA takes no positions on any issue not related to Israel or US-Israel relations.)

Gov. Huckabee was not going to address gay marriage – but only address the reasons why we all should support Israel as he does, and explain why the attacks on Israel are wrong.

The ZOA believes a pro-Israel group should give a podium to a pro-Israel speaker irrespective of his/her position on non-Israel issues (with some rare exceptions). Whether a speaker supports same-sex marriage or opposes it; whether a speaker supports or opposes gun control, Obamacare, raising the minimum wage, the different theories on climate change etc. should be irrelevant to the choice of a pro-Israel speaker. And, Pastor Huckabee’s position on marriage should be given special respect and understanding because he is a Pastor who believes in the Bible.

Are we going to forbid most, if not all Orthodox Rabbi’s from speaking to us about Israel in Canada or America if they oppose same-sex marriage? Can one no longer express support for positions the Bible and Torah takes without being ostracized and punished? Do we no longer have respect for constitutional protections of religious freedoms and cultural norms concerning the family?

And in this case, presidential candidate Governor Pastor Huckabee would have received no political benefit speaking to this group of Canadian citizens – they can’t vote for him! Gov. Huckabee’s motivation and purpose was to inspire and encourage and promote support for Israel. We pro-Israel Jews should be grateful that a prominent gentile loves Israel and does all he can to fight for her.

The ZOA believes that the JNF Canada was wrong to cancel a major and fabulous pro-Israel speaker because of a Torah and Biblical position he takes unrelated to Israel.

During the difficult times Israel is now enduring, it needs all the support it can gather. Silencing the voice of one of pro-Israel’s powerful gentile supporters was the wrong and cowardly position to take.

We urge the JNF to publicly apologize to Gov. Pastor Huckabee and re-invite him to speak. We Jews should thank almighty G-d that we have an eloquent, powerful, and visible supporter like Governor Mike Huckabee.

We would love to hear from you! Please fill out this form and we will get in touch with you shortly.
Trending Z
News June 17, 2015
ZOA Condemns U.S. State Dept. & U.S. Amb. Nides For Siding with Antisemitic, Discriminatory Palestinian & Hamas Terrorists re: the Temple Mount, Violating Jews’ Religious Freedom
Uncategorized June 17, 2015
FLASH: ISRAEL-JORDAN PEACE TREATY (1994) GUARANTEES JEWS ACCESS TO THE TEMPLE MOUNT – LET MY PEOPLE PRAY
Uncategorized June 17, 2015
ZOA Analysis: Most American Rabbis Who Are Boycotting Some Israeli Ministers Are From Extremist Left Wing Groups (J Street; T’ruah; JVP)
Uncategorized June 17, 2015
Israel’s “Right of Return” Grandparent Clause is De-Judaizing the Jewish State – Eliminate It
Center for Law & Justice
We work to educate the American public and Congress about legal issues in order to advance the interests of Israel and the Jewish people.
We assist American victims of terrorism in vindicating their rights under the law, and seek to hold terrorists and sponsors of terrorism accountable for their actions.
We fight anti-Semitism and anti-Israel bias in the media and on college campuses.
We strive to enforce existing law and also to create new law in order to safeguard the rights of the Jewish people in the United States and Israel.
Our Mission
ZOA STATEMENT
The ZOA speaks out for Israel – in reports, newsletters, and other publications. In speeches in synagogues, churches, and community events, in high schools and colleges from coast to coast. In e-mail action alerts. In op-eds and letters to the editor. In radio and television appearances by ZOA leaders. Always on the front lines of pro-Israel activism, ZOA has made its mark.
Related Articles
OP-ED ZOA: Brookings Institution Must Return $14 Million To Qatar, Supporter of ISIS