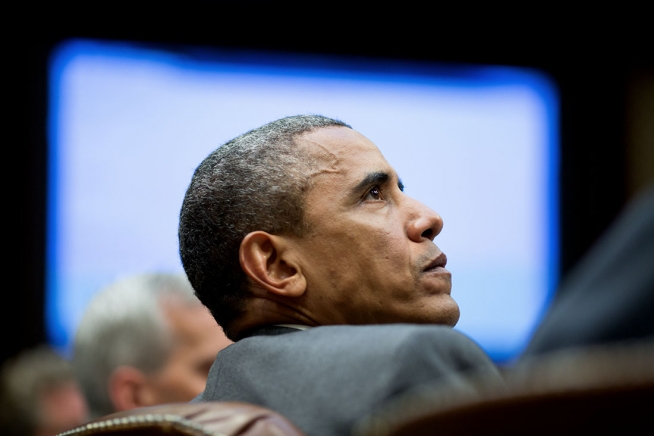 The Zionist Organization of America (ZOA) has expressed deep concern over the refusal of the White House to condemn, apologize for and fire the Obama Administration official who was quoted by the Atlantic’s Jeffrey Goldberg as describing Israeli Prime Minister Benjamin Netanyahu as a “chickens..t.” The ZOA believes that, if the Obama Administration genuinely disagreed with these comments, it would apologize for them, as well as identify and fire the official concerned –– as it undoubtedly would if a similar expletive had been uttered against Palestinian Authority (PA) president Mahmoud Abbas, or Turkish President Recep Tayyip Erdogan, or Iranian President Hassan Rouhani.

Queried as to whether the Obama Administration regarded it as acceptable for an Administration official to describe the Israeli Prime Minister as a “chickens..t,” White House Press Secretary Josh Earnest replied that, “comments like that do not reflect the Administration’s view,” that they are “counterproductive,” that he’d be “surprised” if the President knew who made them and that “anonymous comments like that on a range of issues are not particularly unique.” Queried further whether the White House would seek out and punish the official responsible, Mr. Earnest dodged the question, merely observing that anonymous comments are “not particularly unique” and reiterating that this view that they were not those of the Administration. When asked a second time if the Administration would seek to identify the official, Mr. Earnest said, “I don’t know of any effort like that that’s underway right now.” (‘Press Briefing by Press Secretary Josh Earnest, 10/29/2014’).

“This is weak, grudging, utterly inadequate and insulting to the Israeli Prime Minister, Israel and the Jewish people.”

ZOA National President Morton A. Klein said, “The ZOA is deeply concerned and appalled that the White House press secretary dodged and weaved repeatedly when asked the simple question –– would the Obama Administration apologize for, identify and punish the Administration official who called Israeli Prime Minister Benjamin Netanyahu a ‘chickens..t.’

“An Administration that genuinely disagreed with and was appalled by one of its officials using this language about the prime minister of a close and important ally of the United States would have had no difficulty apologizing for the words of its official and immediately confirming that the official would be identified and dismissed.

“This is weak, grudging, utterly inadequate and insulting to the Israeli Prime Minister, Israel and the Jewish people.

“One need scarcely wonder what the attitude of the Obama Administration would be if one of its officials had used identical language to describe, let us say, Palestinian Authority (PA) president Mahmoud Abbas, or Turkish President Recep Tayyip Erdogan or Iranian President Hassan Rouhani.

“The White House would not simply be saying it doesn’t agree with the words of such an official. It would condemn his words, apologize to the offended party on behalf of the United States and would most assuredly make it clear that it would find and dismiss the official concerned.

“President Obama’s failure to do these things clearly indicates he’s comfortable with these remarks.

“This issue is therefore unresolved and the ADL’s Abe Foxman is quite mistaken to argue that the White House statements should ‘bring closure to this issue.’

We would love to hear from you! Please fill out this form and we will get in touch with you shortly.
Trending Z
News November 3, 2014
ZOA Deplores that Pres. Trump Dined with Jew-Haters Kanye West & Nick Fuentes, and Demands he Condemn Them
Uncategorized November 3, 2014
ZOA Honors Trump With Rarely Given Herzl Award for His Great Pro-Israel Work – Joins Ranks of Balfour, Truman, Begin, Meir, Ben-Gurion
News November 3, 2014
ZOA Responds to Questions About Pres. Trump, Kanye West, Fuentes, etc. Issue
Uncategorized November 3, 2014
Zionist Organization of America Honors Donald Trump for Support for Israel, Jewish Community
Center for Law & Justice
We work to educate the American public and Congress about legal issues in order to advance the interests of Israel and the Jewish people.
We assist American victims of terrorism in vindicating their rights under the law, and seek to hold terrorists and sponsors of terrorism accountable for their actions.
We fight anti-Semitism and anti-Israel bias in the media and on college campuses.
We strive to enforce existing law and also to create new law in order to safeguard the rights of the Jewish people in the United States and Israel.
Our Mission
ZOA STATEMENT
The ZOA speaks out for Israel – in reports, newsletters, and other publications. In speeches in synagogues, churches, and community events, in high schools and colleges from coast to coast. In e-mail action alerts. In op-eds and letters to the editor. In radio and television appearances by ZOA leaders. Always on the front lines of pro-Israel activism, ZOA has made its mark.
Related Articles
OP-ED ZOA: Natl. Jewish Democratic Council Should Oppose Hagel Nomination As It Did In 2009