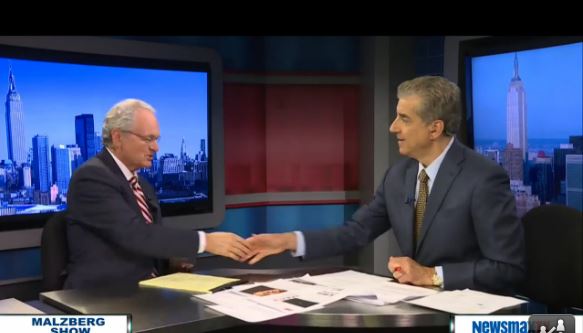 “This is painful to say … the evidence requires me to believe that he has a painful, unpleasant, shocking sympathy to radical Islam.”

“When [Iran President] Hassan Rouhani last week said ‘death to America to say is easy, what we need is death to America with action,’ and Obama doesn’t criticize him, I’m worried about where he stands on these issues.”

“This deal gives them hundreds of billions of dollars in money … as the world’s leading country who funds and arms Islamic terrorists … You’re going to see a dramatic increase of Islamic terrorism because they’re going to be funding them,” Klein said.

“They already give hundreds of millions of dollars a year to Hamas and Hezbollah, they’ve already given tens of thousands even 100,000 missiles to Hezbollah. There will be more, they have 80 training camps in South America of jihadists training for terrorism. They’re doing terrorism in 30 countries on five continents.

“This is an insane deal to be funding and giving all this money to a country that promotes Islamic terrorism. As [Sen.] Ted Cruz said, ‘It’ll make America the biggest financier of Islamic terrorism on Earth.'”

Klein’s group, the oldest pro-Israel organization in the United States, describes itself as “dedicated to educating the public, elected officials, media, and college/high school students about the truth of the ongoing and relentless Arab war against Israel.”

We would love to hear from you! Please fill out this form and we will get in touch with you shortly.
Trending Z
News July 31, 2015
ZOA Condemns U.S. State Dept. & U.S. Amb. Nides For Siding with Antisemitic, Discriminatory Palestinian & Hamas Terrorists re: the Temple Mount, Violating Jews’ Religious Freedom
News July 31, 2015
ZOA’s Klein JPost Op-Ed: There is Nothing Extreme About Israel’s New Government
Uncategorized July 31, 2015
FLASH: ISRAEL-JORDAN PEACE TREATY (1994) GUARANTEES JEWS ACCESS TO THE TEMPLE MOUNT – LET MY PEOPLE PRAY
Uncategorized July 31, 2015
ZOA Analysis: Most American Rabbis Who Are Boycotting Some Israeli Ministers Are From Extremist Left Wing Groups (J Street; T’ruah; JVP)
Center for Law & Justice
We work to educate the American public and Congress about legal issues in order to advance the interests of Israel and the Jewish people.
We assist American victims of terrorism in vindicating their rights under the law, and seek to hold terrorists and sponsors of terrorism accountable for their actions.
We fight anti-Semitism and anti-Israel bias in the media and on college campuses.
We strive to enforce existing law and also to create new law in order to safeguard the rights of the Jewish people in the United States and Israel.
Our Mission
ZOA STATEMENT
The ZOA speaks out for Israel – in reports, newsletters, and other publications. In speeches in synagogues, churches, and community events, in high schools and colleges from coast to coast. In e-mail action alerts. In op-eds and letters to the editor. In radio and television appearances by ZOA leaders. Always on the front lines of pro-Israel activism, ZOA has made its mark.
Related Articles
OP-ED Jewish Fraternity ZBT Says: Contact ZOA With Any Campus Anti-Semitism Issues