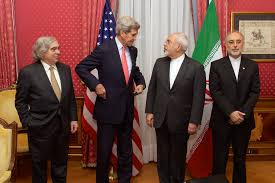 The Zionist Organization of America (ZOA) has noted the statements of senior French diplomat, Jacques Audibert, which directly contradict Secretary of State John Kerry’s July 24 claim that a Congressional ‘no’ vote on the nuclear deal signed by the Obama Administration with America’s enemy, the extremist Shia Islamic Republic of Iran, would destroy the nuclear deal. Secretary Kerry said that if Congress voted down the deal, there would be no chance to restart negotiations in search of a tougher deal, and asked rhetorically, “Do you think the Ayatollah is going to come back to the table if Congress refuses this and negotiate again?”

Mr. Audibert is the senior diplomatic adviser to French President François Hollande, and served previously as Director-General for Political Affairs in the French Foreign Ministry (2009-14) during which period he led the French diplomatic team in the discussions with Iran and the P5+1 group.

Mr. Audibert is reported to have “directly disputed” Secretary Kerry’s claim that a Congressional rejection of the Iran deal would result in the worst of all worlds.

Secretary Kerry is pressuring the U.S. Congress into approving the catastrophic nuclear deal that most Democrats and Republicans either oppose or are greatly concerned about. However, Mr. Audibert told U.S. lawmakers, House Members Loretta Sanchez (D-CA) and Mike Turner (R-OH), both top members of the House Armed Services Committee, that a Congressional ‘no’ vote might actually be helpful in arriving at an improved agreement later.

Mr. Audibert is reported to have “directly disputed” Secretary Kerry’s claim that a Congressional rejection of the Iran deal would result in the worst of all worlds, the collapse of sanctions and Iran racing to the bomb without restrictions. Cong. Sanchez said, “He basically said, if Congress votes this down, there will be some saber-rattling and some chaos for a year or two, but in the end nothing will change and Iran will come back to the table to negotiate again and that would be to our advantage … He thought if the Congress voted it down, that we could get a better deal.”

Moreover, Mr. Audibert said, that if U.S. sanctions were kept in place, it would effectively prevent the West from doing extensive business in Iran. Cong. Sanchez said, “I asked him specifically what the Europeans would do, and his comment was that the way the U.S. sanctions are set in, he didn’t see an entity or a country going against them, that the risk was too high.” Mr. Audibert also told the legislators that the Iran deal should have been a permanent one, not one covering only a fixed period of years, nor could he understand why Iran needs more than 5,000 centrifuges it retains under the deal for a peaceful nuclear program. He also expressed concerns about the robustness of the inspections and verification regime under the deal (Josh Rogin, ‘Top French Official Contradicts Kerry on Iran Deal,’ Bloomberg News, July 30, 2015).

ZOA National President Morton A. Klein said, “We see here clearly that Secretary Kerry’s arguments to pressure the U.S. Congress into endorsing a catastrophic nuclear agreement on which it was not consulted, and in which secret annexes have been withheld from it, do not hold water.

“The nuclear deal is one that leaves all the elements of Iran’s nuclear weapons program intact and thus permits Iran to emerge as a nuclear weapons state when the agreement lapses in 13 years, perhaps less. As we have repeatedly pointed out, it also awards Iran with $150 billion in unfrozen assets and tens of billions of dollars annually in sanctions relief, funds that will undoubtedly be used to bolster Iranian proxies, including Hezbollah and Hamas. It will also enable Iran to proceed full steam ahead on further development of its Intercontinental Ballistic Missiles (ICBMs) program, missiles that can have only one purpose — to hit the U.S., Israel. Europe is already within range of existing Iranian missiles.

“Defeating this deal is a national security issue. The Congress should vote according to its understanding of the agreement, not on extraneous and false claims about the impact its rejection might have. As Mr. Audibert explains, the Congress, via a rejection of the nuclear deal and the maintenance of U.S. sanctions can clearly have a beneficial impact on the viability of this deal. It thus, holds open a prospect of revising this agreement in a way that serves to protect the U.S., Israel, and the world from a nuclear-armed Iran.”

We would love to hear from you! Please fill out this form and we will get in touch with you shortly.
Trending Z
News August 3, 2015
ZOA Condemns U.S. State Dept. & U.S. Amb. Nides For Siding with Antisemitic, Discriminatory Palestinian & Hamas Terrorists re: the Temple Mount, Violating Jews’ Religious Freedom
News August 3, 2015
ZOA’s Klein JPost Op-Ed: There is Nothing Extreme About Israel’s New Government
Uncategorized August 3, 2015
FLASH: ISRAEL-JORDAN PEACE TREATY (1994) GUARANTEES JEWS ACCESS TO THE TEMPLE MOUNT – LET MY PEOPLE PRAY
Uncategorized August 3, 2015
ZOA Analysis: Most American Rabbis Who Are Boycotting Some Israeli Ministers Are From Extremist Left Wing Groups (J Street; T’ruah; JVP)
Center for Law & Justice
We work to educate the American public and Congress about legal issues in order to advance the interests of Israel and the Jewish people.
We assist American victims of terrorism in vindicating their rights under the law, and seek to hold terrorists and sponsors of terrorism accountable for their actions.
We fight anti-Semitism and anti-Israel bias in the media and on college campuses.
We strive to enforce existing law and also to create new law in order to safeguard the rights of the Jewish people in the United States and Israel.
Our Mission
ZOA STATEMENT
The ZOA speaks out for Israel – in reports, newsletters, and other publications. In speeches in synagogues, churches, and community events, in high schools and colleges from coast to coast. In e-mail action alerts. In op-eds and letters to the editor. In radio and television appearances by ZOA leaders. Always on the front lines of pro-Israel activism, ZOA has made its mark.
Related Articles
OP-ED Abbas’ P.A. Continues to Promote Anti-Semitic Protocols Of The Elders Of Zion