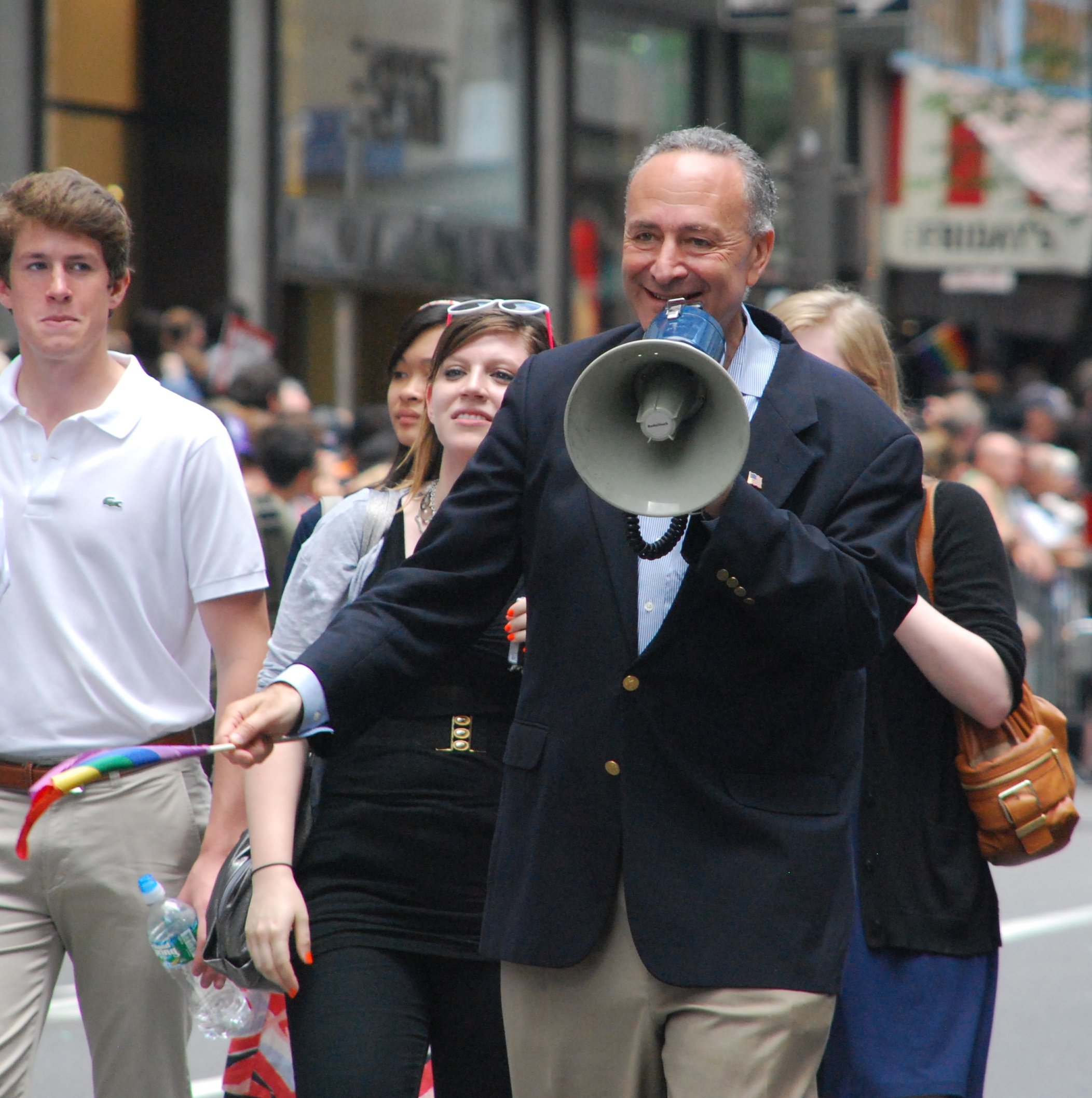 Senator Chuck Schumer is the third ranking member of the U.S. Senate, and serves as Chairman of the Senate’s Democratic Policy and Communications Center.

To me, after ten years, if Iran is the same nation as it is today, we will be worse off with this agreement than without it.

When Senator Schumer publicly supported Chuck Hagel’s confirmation as Secretary of Defense, Senator Schumer urged his colleagues to join him.   We urge Senator Schumer to do the same here, when the stakes are so much higher and the U.S. and its allies faces existential nuclear threats as well as dramatically increased Islamic terrorism funded by the billions of dollars that Iran will receive from this deal.

In his statement, Senator Schumer set forth the following serious weaknesses with the Iran deal that resulted in his decision to vote to disapprove the deal:

In the first ten years of the deal, there are serious weaknesses in the agreement. First, inspections are not “anywhere, anytime”; the 24-day delay before we can inspect is troubling.  While inspectors would likely be able to detect radioactive isotopes at a site after 24 days, that delay would enable Iran to escape detection of any illicit building and improving of possible military dimensions (PMD) – the tools that go into building a bomb but don’t emit radioactivity.

Furthermore, even when we detect radioactivity at a site where Iran is illicitly advancing its bomb-making capability, the 24-day delay would hinder our ability to determine precisely what was being done at that site.

Even more troubling is the fact that the U.S. cannot demand inspections unilaterally.  By requiring the majority of the 8-member Joint Commission, and assuming that China, Russia, and Iran will not cooperate, inspections would require the votes of all three European members of the P5+1 as well as the EU representative. It is reasonable to fear that, once the Europeans become entangled in lucrative economic relations with Iran, they may well be inclined not to rock the boat by voting to allow inspections.

Additionally, the “snapback” provisions in the agreement seem cumbersome and difficult to use.  While the U.S. could unilaterally cause snapback of all sanctions, there will be instances where it would be more appropriate to snapback some but not all of the sanctions, because the violation is significant but not severe.  A partial snapback of multilateral sanctions could be difficult to obtain, because the U.S. would require the cooperation of other nations.  If the U.S. insists on snapback of all the provisions, which it can do unilaterally, and the Europeans, Russians, or Chinese feel that is too severe a punishment, they may not comply.

Those who argue for the agreement say it is better to have an imperfect deal than to have nothing; that without the agreement, there would be no inspections, no snapback. When you consider only this portion of the deal – nuclear restrictions for the first ten years – that line of thinking is plausible, but even for this part of the agreement, the weaknesses mentioned above make this argument less compelling.

Second, we must evaluate how this deal would restrict Iran’s nuclear development after ten years.

Supporters argue that after ten years, a future President would be in no weaker a position than we are today to prevent Iran from racing to the bomb. That argument discounts the current sanctions regime.  After fifteen years of relief from sanctions, Iran would be stronger financially and better able to advance a robust nuclear program.  Even more importantly, the agreement would allow Iran, after ten to fifteen years, to be a nuclear threshold state with the blessing of the world community. Iran would have a green light to be as close, if not closer to possessing a nuclear weapon than it is today. And the ability to thwart Iran if it is intent on becoming a nuclear power would have less moral and economic force.

If Iran’s true intent is to get a nuclear weapon, under this agreement, it must simply exercise patience. After ten years, it can be very close to achieving that goal, and, unlike its current unsanctioned pursuit of a nuclear weapon, Iran’s nuclear program will be codified in an agreement signed by the United States and other nations.  To me, after ten years, if Iran is the same nation as it is today, we will be worse off with this agreement than without it.

In addition, we must consider the non-nuclear elements of the agreement.  This aspect of the deal gives me the most pause.  For years, Iran has used military force and terrorism to expand its influence in the Middle East, actively supporting military or terrorist actions in Israel, Syria, Lebanon, Yemen, Iraq, and Gaza.  That is why the U.S. has labeled Iran as one of only three nations in the world who are “state sponsors of terrorism.”  Under this agreement, Iran would receive at least $50 billion dollars in the near future and would undoubtedly use some of that money to redouble its efforts to create even more trouble in the Middle East, and, perhaps, beyond.

To reduce the pain of sanctions, the Supreme Leader had to lean left and bend to the moderates in his country.  It seems logical that to counterbalance, he will lean right and give the Iranian Revolutionary Guard (IRGC) and the hardliners resources so that they can pursue their number one goal: strengthening Iran’s armed forces and pursuing even more harmful military and terrorist actions.

Finally, the hardliners can use the freed-up funds to build an ICBM on their own as soon as sanctions are lifted (and then augment their ICBM capabilities in 8 years after the ban on importing ballistic weaponry is lifted), threatening the United States.  Restrictions should have been put in place limiting how Iran could use its new resources.

When it comes to the non-nuclear aspects of the deal, I think there is a strong case that we are better off without an agreement than with one.

Ultimately, in my view, whether one supports or opposes the resolution of disapproval depends on how one thinks Iran will behave under this agreement.

If one thinks Iran will moderate, that contact with the West and a decrease in economic and political isolation will soften Iran’s hardline positions, one should approve the agreement.  After all, a moderate Iran is less likely to exploit holes in the inspection and sanctions regime, is less likely to seek to become a threshold nuclear power after ten years, and is more likely to use its newfound resources for domestic growth, not international adventurism.

But if one feels that Iranian leaders will not moderate and their unstated but very real goal is to get relief from the onerous sanctions, while still retaining their nuclear ambitions and their ability to increase belligerent activities in the Middle East and elsewhere, then one should conclude that it would be better not to approve this agreement.

Admittedly, no one can tell with certainty which way Iran will go. It is true that Iran has a large number of people who want their government to decrease its isolation from the world and focus on economic advancement at home.  But it is also true that this desire has been evident in Iran for thirty-five years, yet the Iranian leaders have held a tight and undiminished grip on Iran, successfully maintaining their brutal, theocratic dictatorship with little threat. Who’s to say this dictatorship will not prevail for another ten, twenty, or thirty years?

To me, the very real risk that Iran will not moderate and will, instead, use the agreement to pursue its nefarious goals is too great.

Therefore, I will vote to disapprove the agreement, not because I believe war is a viable or desirable option, nor to challenge the path of diplomacy.  It is because I believe Iran will not change, and under this agreement it will be able to achieve its dual goals of eliminating sanctions while ultimately retaining its nuclear and non-nuclear power.  Better to keep U.S. sanctions in place, strengthen them, enforce secondary sanctions on other nations, and pursue the hard-trodden path of diplomacy once more, difficult as it may be.

For all of these reasons, I believe the vote to disapprove is the right one.”

“The answers I’ve received simply don’t convince me that this deal will keep a nuclear weapon out of Iran’s hands, and may in fact strengthen Iran’s position as a destabilizing and destructive influence across the Middle East.”

We would love to hear from you! Please fill out this form and we will get in touch with you shortly.
Trending Z
Uncategorized August 7, 2015
FLASH: ISRAEL-JORDAN PEACE TREATY (1994) GUARANTEES JEWS ACCESS TO THE TEMPLE MOUNT – LET MY PEOPLE PRAY
Uncategorized August 7, 2015
ZOA Analysis: Most American Rabbis Who Are Boycotting Some Israeli Ministers Are From Extremist Left Wing Groups (J Street; T’ruah; JVP)
Uncategorized August 7, 2015
Israel’s “Right of Return” Grandparent Clause is De-Judaizing the Jewish State – Eliminate It
Uncategorized August 7, 2015
Exclusive: ZOA Accuses Ilhan Omar of Hating the U.S. ‘as Much as Israel,’ Lauds Kevin McCarthy for ‘Throwing Her Off the HFAC’
Center for Law & Justice
We work to educate the American public and Congress about legal issues in order to advance the interests of Israel and the Jewish people.
We assist American victims of terrorism in vindicating their rights under the law, and seek to hold terrorists and sponsors of terrorism accountable for their actions.
We fight anti-Semitism and anti-Israel bias in the media and on college campuses.
We strive to enforce existing law and also to create new law in order to safeguard the rights of the Jewish people in the United States and Israel.
Our Mission
ZOA STATEMENT
The ZOA speaks out for Israel – in reports, newsletters, and other publications. In speeches in synagogues, churches, and community events, in high schools and colleges from coast to coast. In e-mail action alerts. In op-eds and letters to the editor. In radio and television appearances by ZOA leaders. Always on the front lines of pro-Israel activism, ZOA has made its mark.
Related Articles
OP-ED BY: ZOA Glorification of Jew-Killer Underscores Israel’s Rejection by Neighbors