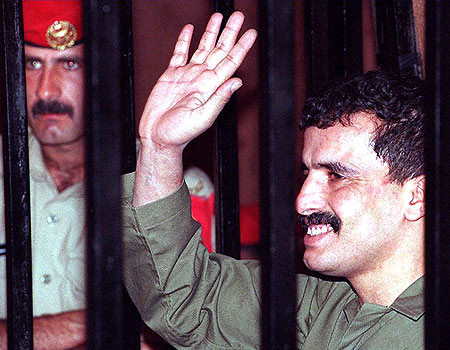 The Zionist Organization of America (ZOA) has noted the recent overwhelming call in the Jordanian parliament for the release from prison of Musa Mustafa Daqamseh, the Jordanian soldier who in 1997 went on a rampage and murdered seven Israeli schoolgirls. The Jordanian parliament’s lower house, which has 120 legislators, produced an overwhelming 110 votes in favor of Daqamseh’s release. Daqamseh was sentenced to 25 years in prison but many in Jordan have resented the sentence on this Jew-killer and demanded his release.

This includes Hussein Mjali, Jordan’s former justice minister, who has referred to Daqamseh as a “hero” and, two years, took it upon himself to agitate publicly for his early release. Mjali has said that “if a Jew killed Arabs they would have built a monument in his honor” (Rois Kais, ‘Jordanian parliament demands release of Naharayim shooter,’ Yediot Ahronot, April 12, 2013). In February 2011, Mjali has also called Israel a “terrorist state that will be destroyed” in an interview with Jordanian newspaper Al-Arab Al-Yom (Jack Khoury, ‘Jordan justice minister: Israel is a terrorist state,’ Haaretz, February 16, 2011).

At the time of Mjali’s statement, Merav Horsandi, Israeli embassy spokeswoman in Amman, said, it “is difficult for us to comprehend how there are people who support the release of a cold-blooded murderer of young children” (‘Jordan minister rallies for killer of Israelis,’ Yediot Ahronot, February 14, 2011).

As Harvard Law Professor Alan Dershowitz has observed, Daqamseh “expressed pride in his mass murder, was convicted of these crimes but spared the death penalty, despite the fact that Jordan executes large numbers of criminals for relatively trivial offenses.” Daqamseh’s mother has said, “I am proud of my son and I hold my head high. My son did a heroic deed and has pleased Allah and his own conscience. My son lifts my head and the head of the entire Arab and Islamic nation. I am proud of any Muslim who does what Ahmed did.” And Daqamseh himself says that “I have no regrets … The only thing I am angry about is the gun, which did not work properly. Otherwise, I would have killed all of the [children]” (Alan Dershowitz, ‘As Israelis Mourn, Jordanians Glorify,’ Gatestone Institute, April 15, 2013).

ZOA National President Morton A. Klein said, “The clamor in Jordan for the early release of Daqamseh is highly significant. It shows that even in a country with which Israel has signed peace, the population, including senior government ministers, regard this Jew-slayer as a hero and want him set free. For them, murdering Jewish children is not a crime, but a valorous act.

“Bear in mind the Israeli/Jordanian peace treaty was the easiest one to conclude. There were no territorial issues between the two sides, the late King Hussein having previously renounced claims to Judea and Samaria. In fact, the peace treaty only gave Jordan advantages – water from Israel and an agreement on Jordanian custodianship of Muslim holy sites in Jerusalem. Nothing had to be given up, except the intent to destroy Israel. This is what infuriates Hussein Mjali and what would appear to be most Jordanians.

“Majli’s statement that Israel would build a shrine to an Arab-killer is both untrue and a classic case of projection. It is Mahmoud Abbas’ Palestinian Authority (PA), which glorifies Jew-killers and names schools, streets, sports teams, tournaments and youth camps after terrorists.

“It is also significant that, only yesterday, following what appears to be the bombing by a terrorist or terrorists of the Boston marathon, a Jordanian Islamist extremist, the head of a Salafi group, Mohammad al-Chalabi, said that he was ‘happy to see the horror in America.’ Chalabi, who also has served seven years in prison for his part in a foiled 2003 al-Qaeda attempt to bomb the U.S. and other embassies in Amman, also said,  ‘Let the Americans feel the pain we endured by their armies occupying Iraq and Afghanistan and killing our people there.’

“It is not a coincidence that these extremists are overjoyed when innocent Israelis and Americans, even children, are murdered. They wish to see us destroyed.

“Little wonder that Israel has been unable to bring Palestinians to sign a genuine peace treaty, or even to negotiate on one for years.

“These recent events remind us that Israel, the sovereign Jewish presence in the land of Israel, is reviled by a great deal of Israel’s neighbors. Under prevailing conditions, Israel must make no concessions to unreconstructed Palestinian parties, least of all ‘confidence-building measures’ like freeing jailed terrorists, many of whom return to terrorism and most of whom have, like Daqamseh, no regrets about having murdered, or tried to murder, Jews.”

We would love to hear from you! Please fill out this form and we will get in touch with you shortly.
Trending Z
Uncategorized April 16, 2013
ZOA Analysis: Most American Rabbis Who Are Boycotting Some Israeli Ministers Are From Extremist Left Wing Groups (J Street; T’ruah; JVP)
Uncategorized April 16, 2013
ZOA: Israel’s Reasonable Judicial Reform Proposals Are Good for Democracy, the Rule of Law and the Economy
News April 16, 2013
ZOA is Disappointed, Offended and Frightened by 211 U.S. House Votes Supporting Jew-Hating, Israel-Hating Rep. Ilhan Omar
Uncategorized April 16, 2013
Israel’s “Right of Return” Grandparent Clause is De-Judaizing the Jewish State – Eliminate It
Center for Law & Justice
We work to educate the American public and Congress about legal issues in order to advance the interests of Israel and the Jewish people.
We assist American victims of terrorism in vindicating their rights under the law, and seek to hold terrorists and sponsors of terrorism accountable for their actions.
We fight anti-Semitism and anti-Israel bias in the media and on college campuses.
We strive to enforce existing law and also to create new law in order to safeguard the rights of the Jewish people in the United States and Israel.
Our Mission
ZOA STATEMENT
The ZOA speaks out for Israel – in reports, newsletters, and other publications. In speeches in synagogues, churches, and community events, in high schools and colleges from coast to coast. In e-mail action alerts. In op-eds and letters to the editor. In radio and television appearances by ZOA leaders. Always on the front lines of pro-Israel activism, ZOA has made its mark.
Related Articles
OP-ED BY: Morton A. Klein, ZOA Report Claims Obama States Israel Won’t Make Concessions