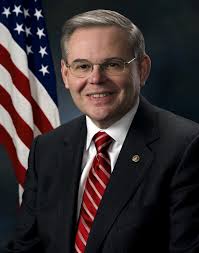 The Zionist Organization of America (ZOA) has strongly praised Senator Bob Menendez (D–NJ), formerly Chairman and later ranking Democrat on the Senate Foreign Relations Committee, for his strong opposition to the Iran nuclear deal signed by the Obama Administration. We have known Senator Menendez for over 20 years. He is a true and proud American patriot as well as one of the most eloquent articulators of American foreign policy.

In a speech at Seton Hall University, Senator Menendez, said:

President Obama and Secretary of State John Kerry have repeatedly said that the choice is between this Iran nuclear agreement and war. I reject that proposition. If the P5+1 had not achieved an agreement, would we be at war with Iran?…

And I believe we could still get a better deal and here’s how: We can disapprove this agreement, without rejecting the entire agreement.

Advocates of the deal argue that a good deal that would have dismantled critical elements of Iran’s nuclear infrastructure isn’t attainable … and that despite our massive economic leverage and the weight of the international community we couldn’t buy more than 10 years of inspection and verification in exchange for permanent sanctions relief and for revoking Iran’s pariah status. I don’t believe that.

And I believe we could still get a better deal and here’s how: We can disapprove this agreement, without rejecting the entire agreement.

We should direct the administration to re-negotiate by authorizing the continuation of negotiations and the Joint Plan of Action — including Iran’s $700 million-a-month lifeline, which to date have accrued to Iran’s benefit to the tune of $10 billion, and pausing further reductions of purchases of Iranian oil and other sanctions pursuant to the original JPOA.

I’m even willing to consider authorizing a sweetener — a one-time release of a predetermined amount of funds as a good-faith down payment on the negotiations.

A continuation of talks would allow the re-consideration of just a few, but a critical few issues, including:

First, immediate ratification by Iran of the Additional Protocol to ensure we have a permanent international arrangement with Iran for access to suspect sites.

Second, a ban on centrifuge R&D for the duration of the agreement to ensure that Iran won’t have the capacity to quickly break out, just as the UN Security Council Resolution and sanctions snapback is off the table.

Third, close the Fordow enrichment facility. The sole purpose of Fordow was to harden Iran’s nuclear program to a military attack. We need to close the facility and foreclose Iran’s future ability to use this facility. If Iran has nothing to hide they shouldn’t need to put it under a mountain.

Fourth, the full resolution of the ‘possible military dimensions’ of Iran’s program. We need an arrangement that isn’t set up to whitewash this issue. Iran and the IAEA must resolve the issue before permanent sanctions relief, and failure of Iran to cooperate should result in an automatic sanctions snapback.

Fifth, extend the duration of the agreement. One of the single most concerning elements of the deal is its 10-15 year sunset of restrictions on Iran’s program, with off-ramps starting after year eight. We were promised an agreement of significant duration and we got less than half of what we are looking for. Iran should have to comply for as long as they deceived the world, so at least 20 years.

And sixth, we need agreement now about what penalties will be collectively imposed by the P5+1 for Iranian violations, both small and midsized, as well as a clear statement as to the so-called grandfather clause in paragraph 37 of the [agreement], to ensure that the US position about not shielding contracts entered into legally upon re-imposition of sanctions is shared by our allies.

At the same time we should: Extend the authorization of the Iran Sanctions Act, which expires in 2016, to ensure that we have an effective snapback option … immediately implement the security measures offered to our partners in the Gulf Summit at Camp David, while preserving Israel’s qualitative military edge.

The president should unequivocally affirm and Congress should formally endorse a Declaration of US Policy that we will use all means necessary to prevent Iran from producing enough enriched uranium for a nuclear bomb, as well as building or buying one, both during and after any agreement.

We should authorize now the means for Israel to address the Iranian threat on their own in the event that Iran accelerates its program and to counter Iranian perceptions that our own threat to use force isn’t credible.

And we should make it absolutely clear that we want a deal, but we want the right deal — and that a deal that does nothing more than delay the inevitable isn’t a deal we will make (Robert Menendez, ‘My proposal for a better Iran deal,’ New York Post, August 19, 2015).

ZOA National President Morton A. Klein said, “We proudly applaud Senator Menendez principled stand, one that has cost him much in terms of Administration pressure, including insinuations from the President that he and like-minded senators were opposing the deal that has since been signed taken because of ‘pressures that senators’ face from donors and others –– meaning Jewish supporters.

“I have known Senator Menendez for over twenty years and his concern about and his position opposing Iran obtaining nuclear weapons has been forceful and consistent across the years.

“We applaud Senator Menendez for taking a strong, pro-American, anti-terrorism position that has earned him pressure and nasty attacks from left-wing groups, who like the President insist on impugning the motives of anyone who opposes this catastrophic nuclear deal.”

We would love to hear from you! Please fill out this form and we will get in touch with you shortly.
Trending Z
News August 20, 2015
ZOA Condemns U.S. State Dept. & U.S. Amb. Nides For Siding with Antisemitic, Discriminatory Palestinian & Hamas Terrorists re: the Temple Mount, Violating Jews’ Religious Freedom
News August 20, 2015
ZOA’s Klein JPost Op-Ed: There is Nothing Extreme About Israel’s New Government
Uncategorized August 20, 2015
FLASH: ISRAEL-JORDAN PEACE TREATY (1994) GUARANTEES JEWS ACCESS TO THE TEMPLE MOUNT – LET MY PEOPLE PRAY
Uncategorized August 20, 2015
ZOA Analysis: Most American Rabbis Who Are Boycotting Some Israeli Ministers Are From Extremist Left Wing Groups (J Street; T’ruah; JVP)
Center for Law & Justice
We work to educate the American public and Congress about legal issues in order to advance the interests of Israel and the Jewish people.
We assist American victims of terrorism in vindicating their rights under the law, and seek to hold terrorists and sponsors of terrorism accountable for their actions.
We fight anti-Semitism and anti-Israel bias in the media and on college campuses.
We strive to enforce existing law and also to create new law in order to safeguard the rights of the Jewish people in the United States and Israel.
Our Mission
ZOA STATEMENT
The ZOA speaks out for Israel – in reports, newsletters, and other publications. In speeches in synagogues, churches, and community events, in high schools and colleges from coast to coast. In e-mail action alerts. In op-eds and letters to the editor. In radio and television appearances by ZOA leaders. Always on the front lines of pro-Israel activism, ZOA has made its mark.
Related Articles
OP-ED BY: ZOA Glorification of Jew-Killer Underscores Israel’s Rejection by Neighbors