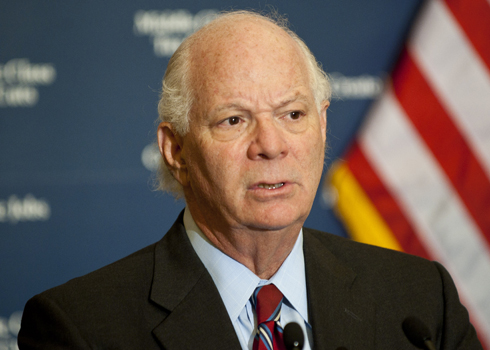 Throughout the process of evaluating the Iran nuclear agreement, I continuously returned to two fundamental questions: Is this deal more or less likely to prevent Iran from becoming a nuclear weapons state? Would rejection increase or decrease the likelihood of the nightmare scenario of a nuclear-armed Iran?

Despite the rhetoric coming from all sides, this is not a clear choice. Nobody possesses clairvoyance.

The lobbying for and against the Joint Comprehensive Plan of Action (JCPOA) negotiated with Iran by the United States and the other P5+1 world powers remains intense, but ultimately this should be a vote of conscience, not a litmus test of party loyalty or political acumen.

Objectively, a nuclear-armed Iran would be a global game-changer that would increase instability in one of the world’s most volatile regions.

The JCPOA would provide this legal path to a country that remains a rogue state and has violated its international nonproliferation obligations for years.

After Iran has received sanctions relief, it will be difficult to effectively re-impose sanctions to prevent a nuclear breakout. If Iran then rushed to produce a nuclear weapon, using the military option becomes more likely.

The JCPOA does contain significant achievements. It imposes severe restrictions on Iran’s nuclear program for the next 10 to 15 years. And we retain the ability to snap back into place international sanctions in the event of a significant violation, without the possibility of other members vetoing U.S. action at the U.N. Security Council.

These achievements were possible due to the diplomatic skills of the Obama administration. Iran was left with no choice but to compromise after years of economic pain resulting from tough U.S. sanctions initiated by Congress.

The bipartisan passage of the Iran Nuclear Agreement Review Act further strengthened our negotiators’ hands. It provided transparency and made clear that the agreement would be subject to critical review.

This is a close call, but after a lengthy review, I will vote to disapprove the deal.

The JCPOA legitimizes Iran’s nuclear program. After 10 to 15 years, it would leave Iran with the option to produce enough enriched fuel for a nuclear weapon in a short time.

The JCPOA would provide this legal path to a country that remains a rogue state and has violated its international nonproliferation obligations for years. It would provide Iran with international endorsement of an industrial-scale nuclear program. Worse, Iran would be economically strengthened by frighteningly quick relief from sanctions and international economic engagement. If Iran violates the agreement, building international support for new sanctions would take too long to be effective. A military response in this scenario would be more likely, although disastrous.

The agreement talks about normalization of economic relations with Iran and states that the parties shall “implement this JCPOA in good faith… based on mutual respect.” But there cannot be respect for a country that actively foments regional instability, advocates for Israel’s destruction, kills the innocent and shouts “Death to America.”

I remain troubled that we agreed to a challenge period of up to 24 days for International Atomic Energy Agency (IAEA) inspections should Iran deny access to an undeclared, suspicious site. And I cannot support lifting the U.N. arms embargo and ballistic missile sanctions.

This agreement leaves resolution of the possible military dimensions of Iran’s nuclear program to the IAEA. The bottom line is that we know Iran was developing a nuclear weapon, and we must understand how far it went down the weaponization path before we can move forward with the JCPOA. After numerous hearings and briefings, I am still not confident that we will fully resolve outstanding concerns on this topic.

What happens if Congress rejects the JCPOA? No one can predict with certainty the consequences. Our European partners understand that they cannot effectively act without the United States. Iran understands that if it accelerates its nuclear program it will ignite international action against it. And Iran needs U.S. sanctions relief. Ultimately, it is in everyone’s interest to reach a diplomatic solution.

Regardless of whether Congress rejects the JCPOA, discomfort with aspects of the agreement remains across the ideological spectrum. That is why I will introduce legislation backed by supporters and opponents of the deal designed to strengthen the Iran Nuclear Agreement Review Act and U.S. regional security strategy. This would be consistent with the administration’s interpretation of the agreement and complement its regional security commitments.

The legislation includes the following:

●It sets as U.S. policy that Iran will never be permitted to obtain a nuclear weapon and that all options remain on the table, including military options.

●It clarifies that no sanctions relief will be provided to Iran until it meets its commitments related to resolving the issue of possible military dimensions. It makes clear that nothing in the JCPOA limits Congress’s ability to pass new sanctions legislation addressing legitimate foreign policy purposes, such as terrorism, human rights and ballistic missile activities. And it underscores that current sanctions addressing ballistic missile proliferation and terrorism remain in place.

●It calls for expedited consideration in Congress of new sanctions should there be evidence that Iran has committed an act of terrorism against the United States or substantially increased its terrorist activities. It compels the executive branch to report on how Iran is using the funds obtained from sanctions relief, which will assist the United States in working to counter Iran’s support for terrorism in the region. And it authorizes a security assistance package for Israel.

●Finally, it demands a robust and comprehensive whole-of-government strategy for how we will collaborate with allies and partners in the region to confront Iran’s network of conventional, ballistic missile and terrorist threats, in addition to its nuclear ambitions.

We must stand firm in our determination to prevent Iran from acquiring a nuclear weapon. We must agree to counter Iranian support for terrorism and confront Iranian violations of ballistic missile protocols and international human rights obligations. Congress and the administration cannot dwell on past disagreements; together we must find a functional, bipartisan approach to Iran. I stand ready to work with my colleagues and the administration to achieve such a result.

This article was published by Washington Post and may be found here.

We would love to hear from you! Please fill out this form and we will get in touch with you shortly.
Trending Z
News September 4, 2015
New Biden Nominees Opposed Abraham Accords & Involved in Israeli Election Interference
Uncategorized September 4, 2015
ZOA Letter to DOJ & FBI on New “Mapping Project” Antisemitic Threat by ZOA Pres. Morton Klein, Dir. of Research/Special Projects Liz Berney, Esq., Dir. Center for Law & Justice Susan Tuchman, Esq.
Op-Ed September 4, 2015
ZOA’s Mort Klein JPost Op-Ed: BDS Mapping Project Targets Every Jew, Including Left Wing, Israelophobic Jews
News September 4, 2015
U.S. Senators Criticize Tamara Wittes, Biden Nominee’s Anti-Israel Bias ― Jewish Groups are Deafeningly Silent
Center for Law & Justice
We work to educate the American public and Congress about legal issues in order to advance the interests of Israel and the Jewish people.
We assist American victims of terrorism in vindicating their rights under the law, and seek to hold terrorists and sponsors of terrorism accountable for their actions.
We fight anti-Semitism and anti-Israel bias in the media and on college campuses.
We strive to enforce existing law and also to create new law in order to safeguard the rights of the Jewish people in the United States and Israel.
Our Mission
ZOA STATEMENT
The ZOA speaks out for Israel – in reports, newsletters, and other publications. In speeches in synagogues, churches, and community events, in high schools and colleges from coast to coast. In e-mail action alerts. In op-eds and letters to the editor. In radio and television appearances by ZOA leaders. Always on the front lines of pro-Israel activism, ZOA has made its mark.
Related Articles
OP-ED BY: ZOA Staff New Poll: Americans By 2-To-1 Margin Blame Palestinians For Talks’ Failure