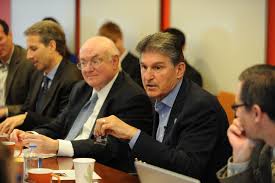 The Zionist Organization of America (ZOA) praises Democrat Senator Joe Manchin (WV) for announcing that he opposes the dangerous Iran deal – formally known as the Joint Comprehensive Plan of Action.   ZOA commends Senator Manchin for his careful analysis of the deal, attendance at every security briefing on the deal, and thoughtful, powerful statement regarding the Iran deal’s fatal failure to address Iran’s terrorist activities.

As we mark this anniversary week of the worst terrorist attack on America’s homeland – an attack that a federal court in Manhattan ruled could not have occurred without Iran’s key role in planning the attack, and in training and facilitating the travel of al Qaeda’s operatives, we especially appreciate Senator Manchin’s conscientious decision to oppose a deal that grants the world’s biggest state sponsor of terrorism another $100 billion or more – at least part of which will be used to further more terrorism.   Senator Manchin correctly explained that the deal’s failure to address Iran’s sponsor of terror against the U.S. and its allies “would reward Iran’s 36 years of deplorable behavior and do nothing to prevent its destructive activities.”

“The Administration has accepted — what I consider to be a false choice — that this is only about nuclear weapons and not terrorism.”

Senator Manchin also aptly noted that when the deal’s sunset provisions take effect, Iran will be “able to produce enough enriched uranium for a nuclear weapon in a very short period of time” and discussed other failings of the Iran deal, as well as the need to negotiate a better deal that makes the citizens of his home state West Virginia, the U.S., and the world all safer.   Below is a copy of Senator Manchin’s exemplary, thoughtful statement opposing the Iran deal:

Manchin Announces He Will Vote Against Iran Deal

“When this process began, I was supportive of the diplomatic efforts led by Secretaries Kerry and Moniz. I have always believed that to truly be a super power, you must engage in super diplomacy. Whenever I am able, I will choose diplomacy over war because the stakes are so high for West Virginia, which has one of the highest rates of military service in the nation.  But as I struggled with this decision, I could not ignore the fact that Iran, the country that will benefit most from sanctions being lifted, refuses to change its 36-year history of sponsoring terrorism.

“For me, this deal had to be about more than preventing Iran from acquiring a nuclear weapon for the next 10-15 years. For me, this deal had to address Iran’s terrorist actions.  Without doing so would reward Iran’s 36 years of deplorable behavior and do nothing to prevent its destructive activities.  In fact, even during the negotiating process, it has continued to hold four Americans hostage, support terrorism around the world, breed anti-American sentiment and acquire arms from Russia.

“The continued actions by Iran and its recent activities with Russia have proven to me that when we catch Iran violating the agreement, and I believe we will, I have grave doubts that we will have unified, committed partners willing to prevent Iran from obtaining a nuclear weapon.

“I also cannot in good conscience agree to Iran receiving up to $100 billion in funds that everyone knows will be used, at least in some part, to continue funding terrorism and further destabilize the Middle East.  Lifting sanctions without ensuring that Iran’s sponsorship of terrorism is neutralized is dangerous to regional and American security. The Administration has accepted — what I consider to be a false choice — that this is only about nuclear weapons and not terrorism. However, the fact of the matter is that we are concerned about Iran having a bomb because, in large part, it is the world’s largest state sponsor of terror.  Asking us to set aside the terrorist question is irresponsible and misses the point.

“Over the last 36 years, Iran has carried out thousands of acts of terror that have killed thousands of innocent lives not just in the Middle East, but around the world; defied international sanctions and treaties; continued to call for and attempt to violently destroy the state of Israel; bombed diplomatic buildings; and murdered innocent civilians.  On top of it all, Iran is directly responsible for the deaths of hundreds of U.S. soldiers. This regime has shown no signs that its deplorable behavior will change, and this deal does nothing to guarantee that behavior changes.

“While the deal places real constraints on Iran’s nuclear program for the next 10-15 years, after that term, Iran will be able to produce enough enriched uranium for a nuclear weapon in a very short period of time. While I hope that its behavior will change in that span, I cannot gamble our security, and that of our allies, on the hope that Iran will conduct themselves differently than it has for the last 36 years.

“It is because of that belief, and a month of thoughtful consideration, that I must cast a vote against this deal. I do not believe that supporting this deal will prevent Iran from eventually acquiring a nuclear weapon or continuing to be a leading sponsor of terrorism against Americans and our allies around the world.

“To those who were upset by my deliberations, I would simply say that the decision to pursue diplomacy is every bit as consequential as the decision to pursue war. In many cases, possibly even this one, the choice to abandon the first path leads inevitably to the second. And I, like most Americans and West Virginians, have already seen too much American sacrifice in the Middle East to push us down the path toward war. However, I don’t believe a vote against this deal forces us to abandon the diplomatic path. We must continue to pursue peace, but on terms that promise a lasting peace for the United States and our allies.”

“I met with and spoke to every national security expert I could; attended every secured briefing that was made available to me; spoke with representatives of every Middle Eastern country, and most importantly, I listened to thousands of West Virginians.  I thank all my constituents who reached out to my office and to the many advisors who took their time to help me reach this decision.

“I will continue to listen to my constituents, and I will support a path towards peace and diplomacy over war and aggression, but make no mistake about it: I will vote to use all of our military might to protect our homeland whenever it is threatened, defend our allies whenever they are put in harm’s way and prevent Iran from acquiring a nuclear weapon. I believe that to be a super power, you must possess super diplomatic skills, and I believe that we can use these skills to negotiate a better deal. We need a deal that the citizens of West Virginia, our country and the world know will make us safer.”

We would love to hear from you! Please fill out this form and we will get in touch with you shortly.
Trending Z
Uncategorized September 8, 2015
FLASH: ISRAEL-JORDAN PEACE TREATY (1994) GUARANTEES JEWS ACCESS TO THE TEMPLE MOUNT – LET MY PEOPLE PRAY
Uncategorized September 8, 2015
ZOA Analysis: Most American Rabbis Who Are Boycotting Some Israeli Ministers Are From Extremist Left Wing Groups (J Street; T’ruah; JVP)
Uncategorized September 8, 2015
Israel’s “Right of Return” Grandparent Clause is De-Judaizing the Jewish State – Eliminate It
Uncategorized September 8, 2015
Exclusive: ZOA Accuses Ilhan Omar of Hating the U.S. ‘as Much as Israel,’ Lauds Kevin McCarthy for ‘Throwing Her Off the HFAC’
Center for Law & Justice
We work to educate the American public and Congress about legal issues in order to advance the interests of Israel and the Jewish people.
We assist American victims of terrorism in vindicating their rights under the law, and seek to hold terrorists and sponsors of terrorism accountable for their actions.
We fight anti-Semitism and anti-Israel bias in the media and on college campuses.
We strive to enforce existing law and also to create new law in order to safeguard the rights of the Jewish people in the United States and Israel.
Our Mission
ZOA STATEMENT
The ZOA speaks out for Israel – in reports, newsletters, and other publications. In speeches in synagogues, churches, and community events, in high schools and colleges from coast to coast. In e-mail action alerts. In op-eds and letters to the editor. In radio and television appearances by ZOA leaders. Always on the front lines of pro-Israel activism, ZOA has made its mark.
Related Articles
OP-ED BY: Morton A. Klein Gov. Mike Huckabee, U.S. Cong. Michele Bachmann, Sheldon & Dr. Miriam Adelson Headline ZOA Dinner

The Zionist Organization of America is proud to announce that former Presidential candidates Gov. Mike Huckabee and U.S. Congressmember Michele Bachmann, as well as global philanthropists/humanitarians Sheldon Adelson and Dr. Miriam Adelson, will headline the ZOA Brandeis Dinner on Sunday, November 24, 2013, at the Grand Hyatt Hotel in New York City. Myron Zimmerman of […]

The Zionist Organization of America (ZOA) has criticized the glaring hypocrisy and inconsistency of the Obama Administration for urging Israel to free Palestinian Arab terrorists with Jewish blood on their hands while simultaneously expressing outrage that Afghan President Hamid Karzai intends to free dozens of prisoners with the blood of Americans on their hands.  Just […]