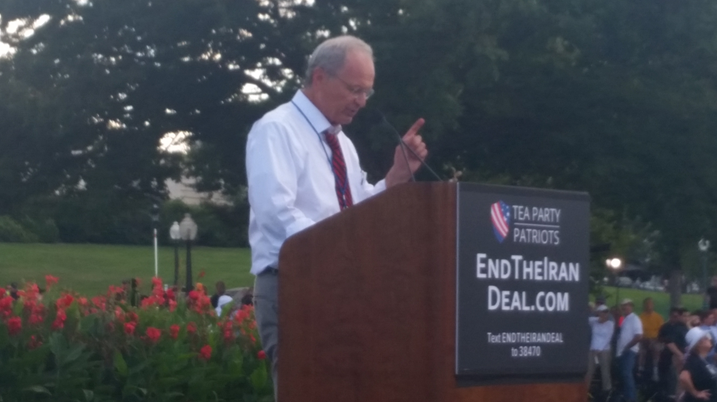 A host of others, including Members of Congress, also addressed the rally, calling upon Congress to reject the deal concluded with Iran by President Barack Obama, which leaves Iran with all the elements of its nuclear weapons program intact, while providing Iran with a pathway to nuclear weapons in perhaps as little as ten years, as well as $150 billion in unfrozen assets and tens of billions of dollars annually in sanctions relief.

Mr. Trump said of the deal that “We cannot let it continue … It’s the end of the world as we know it.”

Senator Cruz told the crowd that this nuclear deal and the massive enrichment of Iran which it will precipitate makes the deal “catastrophic” and warning that it would make the Obama administration “quite literally the world’s leading financier of radical Islamic terrorism … If this deal goes through, we know to an absolute certainty people will die. Americans will die; Israelis will die; Europeans will die … [this agreement] is the single greatest national security threat facing America.”

Mr. Trump said of the deal that “We cannot let it continue … It’s the end of the world as we know it.”

Mr. Levin said that “Never before has a President of the United States, never before has a political party consented to funding and arming the enemy. Never before has a President entered into agreements with a terrorist regime that holds American hostages; that has killed and maimed thousands of American soldiers, and that seeks nuclear weapons and ICBMs (Inter-Continental Ballistic Missiles) to attack his own country… This phony deal allows the Iranian terrorist regime to inspect its own nuclear sites; to continue uranium enrichment; to build advanced centrifuges; to perfect their ICBMS; to spend $150 billion dollars on terrorism, and in the end, to secure nuclear warheads … The Republican Party … can invoke the Treaty Clause right now. They can suspend the filibuster rule and vote against lifting sanctions right now. They can stand between Obama and the Iranian terrorist regime and protect our nation and our allies.”

ZOA National President Morton A. Klein told the rally, “As a child of Holocaust survivors, born in a displaced persons camp in Germany, I’m often asked, ‘How could we have allowed this to happen?’ Well, we see the same thing occurring today where we are empowering and enriching Iran, the Nazi Germany of our time, and ignoring what they say and what they do. Iran could now have nuclear weapons in ten years, perhaps less, and many more conventional weapons in a few years.

“I’ve been told from many quarters that the White House has placed tremendous pressure of Democrats not to cross the President on this Iran deal. Member of Congress, we have been told, have been threatened that, if they oppose this agreement, there will be an end to federal funding for their districts, no national money for races – that opponents will be run against them in primaries and that their activities and finances will be put under investigation. This might explain why many have not come around to opposing this terrible deal, which is strongly opposed by the majority of the American people. We now have a substantial minority of Congress supporting a deal that arms and funds the terrorist regime in Iran.

“This is not a matter of President Obama being naive, incompetent or a poor negotiator. As the late scientist, Linus Pauling, twice the recipient of the Nobel Prize, once said to me when we worked together, ‘Mort, what does the evidence require us to believe?’ Very painfully, I must now ask — What does President Obama’s record require us to believe? It requires us to understand that he is sympathetic to radical Islam.”

We would love to hear from you! Please fill out this form and we will get in touch with you shortly.
Trending Z
News September 11, 2015
ZOA Condemns U.S. State Dept. & U.S. Amb. Nides For Siding with Antisemitic, Discriminatory Palestinian & Hamas Terrorists re: the Temple Mount, Violating Jews’ Religious Freedom
News September 11, 2015
ZOA’s Klein JPost Op-Ed: There is Nothing Extreme About Israel’s New Government
Uncategorized September 11, 2015
FLASH: ISRAEL-JORDAN PEACE TREATY (1994) GUARANTEES JEWS ACCESS TO THE TEMPLE MOUNT – LET MY PEOPLE PRAY
Uncategorized September 11, 2015
ZOA Analysis: Most American Rabbis Who Are Boycotting Some Israeli Ministers Are From Extremist Left Wing Groups (J Street; T’ruah; JVP)
Center for Law & Justice
We work to educate the American public and Congress about legal issues in order to advance the interests of Israel and the Jewish people.
We assist American victims of terrorism in vindicating their rights under the law, and seek to hold terrorists and sponsors of terrorism accountable for their actions.
We fight anti-Semitism and anti-Israel bias in the media and on college campuses.
We strive to enforce existing law and also to create new law in order to safeguard the rights of the Jewish people in the United States and Israel.
Our Mission
ZOA STATEMENT
The ZOA speaks out for Israel – in reports, newsletters, and other publications. In speeches in synagogues, churches, and community events, in high schools and colleges from coast to coast. In e-mail action alerts. In op-eds and letters to the editor. In radio and television appearances by ZOA leaders. Always on the front lines of pro-Israel activism, ZOA has made its mark.
Related Articles
OP-ED BY: ZOA Staff New Poll: Americans By 2-To-1 Margin Blame Palestinians For Talks’ Failure