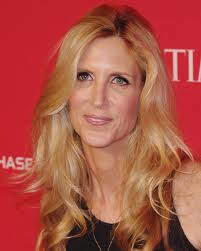 he Zionist Organization of America (ZOA) has urged Fox News and any other media outlet to no longer have conservative pundit Ann Coulter as a guest unless she issues a heartfelt apology for her offensive anti-Semitic tweets during last night’s Republican presidential candidates debate. In the course of the debate, Coulter grew antagonistic towards GOP candidates speaking of the need to strengthen ties with Israel and assist her in potentially defending herself against a nuclear armed Iran.

She first tweeted criticism of former Arkansas Governor Mike Huckabee, Florida Senator Marco Rubio and New Jersey Governor Chris Christie’s support for Israel when answering the question — ‘What will AMERICA [Coulter’s emphasis] look like after you are president?” asking “How many f—ing Jews do these people think there are in the United States?” She also wrote, “Good Grief, Huckabee is running for prime minister of Israel.”

Ann Coulter was gratuitously offensive and anti-Jewish in her remarks on twitter yesterday.

“When GOP candidates speak of strengthening the U.S/Israel relationship which has been harmed by President Obama within the context of the need to ensure that Iran doesn’t go nuclear; to strengthen America’s hand in the world when dealing with vicious totalitarian enemies who seek the demise of the U.S., they are defending America’s interests.

“Instead, and for reasons best known to her, she chose to misrepresent their entirely legitimate statements as pandering to Jews. She was thereby essentially calling them dishonest — speaking out about the U.S./Israel relationship, not because they truly believed they should, but to pander to American Jews who, supposedly, are the key to the next election.

“The irony is that most American Jews would likely not vote for a GOP candidate, no matter how pro-Israel. The idea that the GOP candidates are insincere in their professions of support for Israel and are instead pandering to Jews, apart from being sinister and offensive, is also absurd.

“Ann Coulter is known for making harsh and sweeping statements, but I wonder, would she have ever dared spoken of ‘f—ing blacks’ or ‘f—ing Hispanics’?

“I doubt it. This shows that it seems to be becoming permissible to say anything about Jews.

“Ann Coulter was gratuitously offensive and anti-Jewish in her remarks on twitter yesterday. If such was not her intention, there is a simple remedy: she should immediately retract and make a heartfelt apology for her words.

“Failing this, Fox News and other media outlets should no longer have her as a guest.”

We would love to hear from you! Please fill out this form and we will get in touch with you shortly.
Trending Z
Uncategorized September 18, 2015
ZOA Analysis: Most American Rabbis Who Are Boycotting Some Israeli Ministers Are From Extremist Left Wing Groups (J Street; T’ruah; JVP)
Uncategorized September 18, 2015
ZOA: Israel’s Reasonable Judicial Reform Proposals Are Good for Democracy, the Rule of Law and the Economy
News September 18, 2015
ZOA is Disappointed, Offended and Frightened by 211 U.S. House Votes Supporting Jew-Hating, Israel-Hating Rep. Ilhan Omar
Uncategorized September 18, 2015
Israel’s “Right of Return” Grandparent Clause is De-Judaizing the Jewish State – Eliminate It
Center for Law & Justice
We work to educate the American public and Congress about legal issues in order to advance the interests of Israel and the Jewish people.
We assist American victims of terrorism in vindicating their rights under the law, and seek to hold terrorists and sponsors of terrorism accountable for their actions.
We fight anti-Semitism and anti-Israel bias in the media and on college campuses.
We strive to enforce existing law and also to create new law in order to safeguard the rights of the Jewish people in the United States and Israel.
Our Mission
ZOA STATEMENT
The ZOA speaks out for Israel – in reports, newsletters, and other publications. In speeches in synagogues, churches, and community events, in high schools and colleges from coast to coast. In e-mail action alerts. In op-eds and letters to the editor. In radio and television appearances by ZOA leaders. Always on the front lines of pro-Israel activism, ZOA has made its mark.
Related Articles
OP-ED BY: ZOA Staff New Poll: Americans By 2-To-1 Margin Blame Palestinians For Talks’ Failure