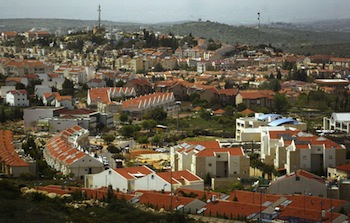 Ariel: A Miracle in the Hills of Samaria
Blogs Uncategorized

As the bus rolled up into the hills of the Israeli countryside, I pondered just how lucky I was. Being in the state of Israel in person, to be standing on my own two feet in the holy land, was and is my own personal miracle, the latest in a long line of them.

We were led on a tour of this beautiful city, which is at the very fore of Israel’s frontier with the PLO.

Thus far, Ariel, a beautiful and flourishing community of some 20,000 people located in the Samarian hills, had welcomed the group— and me— with open arms. We were led on a tour of this beautiful city, which is at the very fore of Israel’s frontier with the PLO. Everywhere we went, the people were friendly and welcoming. We were shown a variety of sites throughout the city, including the Ariel performing arts center and a variety of new construction projects. Wherever we went, the people were friendly and welcoming.

It was only my second day in this beautiful nation, but already I felt at home.We attended a tour of the Fried down pillow and blanket factory, where Israelis and Palestinian Arabs under the employment of Mr. Fried worked together to produce fine products. The tour was fascinating, and gave an interesting window into life, work, and industry in Ariel. It is truly a miracle that the community in Ariel has grown, flourished and prospered. The Israeli presence in these beautiful hills is testament to the awe I felt as I entered and traveled throughout the one and only Jewish state.

We would love to hear from you! Please fill out this form and we will get in touch with you shortly.
Trending Z
News December 24, 2015
ZOA Condemns U.S. State Dept. & U.S. Amb. Nides For Siding with Antisemitic, Discriminatory Palestinian & Hamas Terrorists re: the Temple Mount, Violating Jews’ Religious Freedom
Uncategorized December 24, 2015
FLASH: ISRAEL-JORDAN PEACE TREATY (1994) GUARANTEES JEWS ACCESS TO THE TEMPLE MOUNT – LET MY PEOPLE PRAY
Uncategorized December 24, 2015
ZOA Analysis: Most American Rabbis Who Are Boycotting Some Israeli Ministers Are From Extremist Left Wing Groups (J Street; T’ruah; JVP)
Uncategorized December 24, 2015
Israel’s “Right of Return” Grandparent Clause is De-Judaizing the Jewish State – Eliminate It
Center for Law & Justice
We work to educate the American public and Congress about legal issues in order to advance the interests of Israel and the Jewish people.
We assist American victims of terrorism in vindicating their rights under the law, and seek to hold terrorists and sponsors of terrorism accountable for their actions.
We fight anti-Semitism and anti-Israel bias in the media and on college campuses.
We strive to enforce existing law and also to create new law in order to safeguard the rights of the Jewish people in the United States and Israel.
Our Mission
ZOA STATEMENT
The ZOA speaks out for Israel – in reports, newsletters, and other publications. In speeches in synagogues, churches, and community events, in high schools and colleges from coast to coast. In e-mail action alerts. In op-eds and letters to the editor. In radio and television appearances by ZOA leaders. Always on the front lines of pro-Israel activism, ZOA has made its mark.
Related Articles
OP-ED BY: Stephanie Jablon ZOA Student Reflects on the Holocaust and Israel Advocacy

My purpose here at ZOA was not clear until recently. I applied to come on this student leadership mission trip because I felt I was at a disadvantage on campus when it came to Israel advocacy. This trip was supposed to be a learning experience for me, and it ended up being just that. Today, […]