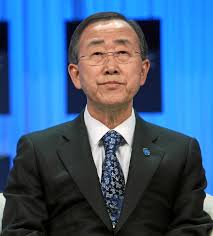 The Zionist Organization of America (ZOA) is appalled by the grotesque and immoral statement by the United Nations Secretary-General, Ban Ki-moon, delivered to the UN Security Council this week, which, among other things, absurdly and immorally blamed Israeli “occupation” and Palestinian Arab “frustration” for recent Palestinian Arab terrorism against Israelis and shockingly legitimized this terrorism by describing Palestinian violence as being part of “human nature to react occupation.”

The ZOA notes that almost all violence between Arabs and Jews in British Palestine during the 1920s and 1930s consisted of Arabs attacks on Jews, and not vice versa. The mass Arab attacks on Jews in 1920, 1921, 1929 and 1936-9 occurred before there was any state, Israel, or any Israeli conquest of Judea/Samaria in the defensive war of 1967. Palestinian Arab terrorism stems from hatred of Jews and desire to destroy their country, not “occupation” or “frustration.”

The 2010 Pew Global Center survey shows that an almost unanimous 97% of Palestinian Arabs hold anti-Jewish views. (This is a basically identical percentage to those in neighboring Arab states, where, in all cases, the population is exposed to vehement anti-Semitism in their media, mosques and schools — but not so in Israel, where Arabs and Jews actually live, work with and routinely encounter each other, and where a majority of Arabs hold favorable views of Jews despite the decades of Arab/Israeli warfare).

While condemning Palestinian terror attacks on Israeli civilians and the rocket fire into Israel from Hamas-controlled Gaza, Secretary-General Ban said:

To condemn terrorist acts and then to explain that they are due to someone or something other than the moral agency of the perpetrators themselves denudes his condemnation of meaning, while also being, in itself, immoral and worthy of condemnation.

“Palestinian frustration is growing under the weight of a half century of occupation and the paralysis of the peace process. Yet, as oppressed peoples have demonstrated throughout the ages, it is human nature to react to occupation, which often serves as a potent incubator of hate and extremism … security measures alone will not stop the violence. They cannot address the profound sense of alienation and despair driving some Palestinians – especially young people. The full force of the law must be brought to bear on all those committing crimes – with a system of justice applied equally for Israelis and Palestinians alike … So-called facts on the ground in the occupied West Bank are steadily chipping away the viability of a Palestinian state and the ability of Palestinian people to live in dignity. Progress towards peace requires a freeze of Israel’s settlement enterprise. Continued settlement activities are an affront to the Palestinian people and to the international community.  They rightly raise fundamental questions about Israel’s commitment to a two-state solution.” (‘Secretary-General’s remarks to the Security Council on the Situation in the Middle East [as delivered],’ January 26, 2016).

ZOA National President Morton A. Klein said, “The ZOA is appalled by Secretary-General Ban’s grotesque and immoral apologia for and legitimizing of Palestinian Arab terrorism, his false leveling of the blame for Palestinian acts of murder on Israeli ‘occupation’ and several other factually false assertions.

“When the UN Secretary-General asserts, as he did, that Palestinian Arab terrorism is a natural reaction to hatred and and extremism engendered by occupation — a false assertion in itself — he nullifies his condemnation of anti-Israel terrorism.

“To condemn terrorist acts and then to explain that they are due to someone or something other than the moral agency of the perpetrators themselves denudes his condemnation of meaning, while also being, in itself, immoral and worthy of condemnation.

“Palestinians do not commit terrorism out of alienation and despair — and even if they did it would not excuse it. They terrorize because Palestinian society, as numerous polls have shown, do not accept Israel’s continued existence as a Jewish state, wish to destroy it, and support (by majorities and pluralities) suicide bombings, shootings, stabbing, car-ramming and any other Palestinian innovation to murder innocent Israelis.

“Secretary-General Ban should condemn that — but, shamefully, he doesn’t. He won’t even refers to these vitally important facts. Instead, he makes excuses and blames the party on the receiving end of this wave of terror.

“The truth is that Arabs have been attacking Jews in the Jewish historical homeland since the 1920s, long before there was a Jewish state or the conquest of Judea/Samaria in the defensive war of 1967.

“Secretary-General Ban also made unfounded and false allegations regarding Israeli administration of justice, saying that it does not extend equally to Palestinian Arabs under Israeli control. Not only do most Palestinians Arabs – some 98% – live under Palestinian regimes in Judea/Samaria and Gaza, and not Israel, but anti-Arab terrorism and hate crimes (which are thankfully few in number) are pursued with full vigor and effectiveness by the Israeli military, police and courts.

“Secretary-General Ban should have blamed dictator Mahmoud Abbas’ Palestinian Authority (PA) for its rejection of negotiations for 7 years and rejection of Israeli peace offers encompassing Palestinian statehood in 2000, 2001, and 2008 by prime ministers Ehud Barak and Ehud Olmert, as well as an offer by Egypt in 2015 to establish in part of Sinai as a Palestinian Arab state — not Jews building homes in Judea/Samaria which, contrary to Mr. Ban’s flat-earth claim, is not illegal, nor should it be. There is no room for the racist notion that Israeli Jews — and only Israeli Jews – may not live anywhere they want, let alone in the historical, biblical Jewish homeland.

“We reject Mr. Ban’s description of Jewish residence in these territories as an ‘affront’ and indicator of a lack of Israeli interest in peace, with the contempt it deserves.

“Secretary-General Ban’s speech is a prime example of the UN’s pathological anti-Israel obsession — in is statement about the Middle East, coming at a time of region-wide war, turbulence and destruction, Mr. Ban devoted fully 47 out of 52 paragraphs to the Israeli/Palestinian divide — all of it critical of Israel, while saying almost nothing critical about the Palestinian Arabs.

“As ZOA has repeatedly pointed out, ‘settlements’ are not an obstacle to peace.  The Arab war against Israel existed long before any settlements were built. These  ‘settlement’ communities comprise only 2% of Judea/Samaria, and the little new building presently under way occurs within the boundaries of existing Jewish communities in historic Jewish land – that will remain part of Israel under any conceivable final peace agreement.”

We would love to hear from you! Please fill out this form and we will get in touch with you shortly.
Trending Z
News January 28, 2016
ZOA Condemns U.S. State Dept. & U.S. Amb. Nides For Siding with Antisemitic, Discriminatory Palestinian & Hamas Terrorists re: the Temple Mount, Violating Jews’ Religious Freedom
Uncategorized January 28, 2016
FLASH: ISRAEL-JORDAN PEACE TREATY (1994) GUARANTEES JEWS ACCESS TO THE TEMPLE MOUNT – LET MY PEOPLE PRAY
Uncategorized January 28, 2016
ZOA Analysis: Most American Rabbis Who Are Boycotting Some Israeli Ministers Are From Extremist Left Wing Groups (J Street; T’ruah; JVP)
Uncategorized January 28, 2016
Israel’s “Right of Return” Grandparent Clause is De-Judaizing the Jewish State – Eliminate It
Center for Law & Justice
We work to educate the American public and Congress about legal issues in order to advance the interests of Israel and the Jewish people.
We assist American victims of terrorism in vindicating their rights under the law, and seek to hold terrorists and sponsors of terrorism accountable for their actions.
We fight anti-Semitism and anti-Israel bias in the media and on college campuses.
We strive to enforce existing law and also to create new law in order to safeguard the rights of the Jewish people in the United States and Israel.
Our Mission
ZOA STATEMENT
The ZOA speaks out for Israel – in reports, newsletters, and other publications. In speeches in synagogues, churches, and community events, in high schools and colleges from coast to coast. In e-mail action alerts. In op-eds and letters to the editor. In radio and television appearances by ZOA leaders. Always on the front lines of pro-Israel activism, ZOA has made its mark.
Related Articles
OP-ED BY: ZOA Staff New Poll: Americans By 2-To-1 Margin Blame Palestinians For Talks’ Failure