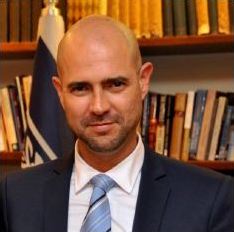 The Zionist Organization of America wishes to thank the Hillcrest Jewish Center in Queens, New York, and its charismatic Rabbi Manes Kogan and dedicated activist Robert Kenler for hosting and co-sponsoring with ZOA a successful breakfast talk by dynamic young Israeli Knesset Member (“MK”) Amir Ohana on Sunday April 10.  (MK Ohana is also the first openly gay member of Knesset). The “standing room only” audience sat riveted during MK Ohana’s presentation, and then engaged in lively Q&A.   Here are a few of the many highlights from MK Ohana’s presentation and Q&A responses:

MK Ohana described examples of Israeli fatalities resulting from abstaining from shooting a downed terrorist, and noted that if there is any doubt as to whether this was self defense, the authorities should find in favor of the Israeli soldier.
[Zaki’s full statement was: “The agreement [the PA is seeking now] is based on the borders of June 4 [1967]. While the agreement is on the borders of June 4, the President (Mahmoud Abbas) understands, we understand, and everyone knows that it is impossible to realize the inspiring idea [the destruction of Israel], or the great goal in one stroke.  If Israel withdraws from Jerusalem, if Israel uproots the settlements, 650,000 settlers, if Israel removes the (security) fence – what will be with Israel?  Israel will come to an end.  If I say that I want to remove it from existence, this will be great, great, [but] it is hard. This is not a [stated] policy.  You can’t say it to the world. You can say it to yourself.” (Official PA TV, Sept. 23, 2011)][6]

MK Ohana described examples of Israeli fatalities resulting from abstaining from shooting a downed terrorist, and noted that if there is any doubt as to whether this was self defense, the authorities should find in favor of the Israeli soldier.  For example, in October 2015, a Bezeq (Israeli phone company) Arab employee first plowed his vehicle into a group of Israelis waiting at a train station in Jerusalem, and then leapt out of his vehicle and attacked the stunned and wounded Israelis with a meat cleaver.  A civilian shot the Arab terrorist, who then got up and continued butchering Israelis with his meat cleaver.  If the terrorist had been shot again, civilians may have been saved from further injury or death.

The audience was very impressed with MK Ohana.  During Q&A, an audience member enthusiastically suggested that MK Ohana should speak at college campuses throughout the U.S.

ZOA thanks MK Ohana for his public service and excellent presentation.

We would love to hear from you! Please fill out this form and we will get in touch with you shortly.
Trending Z
Uncategorized April 20, 2016
ZOA Analysis: Most American Rabbis Who Are Boycotting Some Israeli Ministers Are From Extremist Left Wing Groups (J Street; T’ruah; JVP)
Uncategorized April 20, 2016
ZOA: Israel’s Reasonable Judicial Reform Proposals Are Good for Democracy, the Rule of Law and the Economy
News April 20, 2016
ZOA is Disappointed, Offended and Frightened by 211 U.S. House Votes Supporting Jew-Hating, Israel-Hating Rep. Ilhan Omar
Uncategorized April 20, 2016
Israel’s “Right of Return” Grandparent Clause is De-Judaizing the Jewish State – Eliminate It
Center for Law & Justice
We work to educate the American public and Congress about legal issues in order to advance the interests of Israel and the Jewish people.
We assist American victims of terrorism in vindicating their rights under the law, and seek to hold terrorists and sponsors of terrorism accountable for their actions.
We fight anti-Semitism and anti-Israel bias in the media and on college campuses.
We strive to enforce existing law and also to create new law in order to safeguard the rights of the Jewish people in the United States and Israel.
Our Mission
ZOA STATEMENT
The ZOA speaks out for Israel – in reports, newsletters, and other publications. In speeches in synagogues, churches, and community events, in high schools and colleges from coast to coast. In e-mail action alerts. In op-eds and letters to the editor. In radio and television appearances by ZOA leaders. Always on the front lines of pro-Israel activism, ZOA has made its mark.
Related Articles
OP-ED Fmr. Secy. Colin Powell: Defense Dept. Influences Presidential Policy