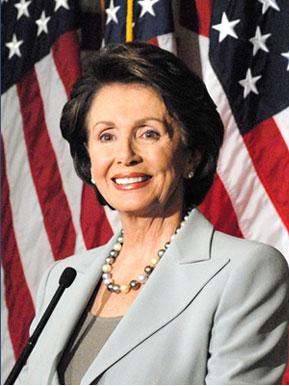 ZOA urges U.S. House Minority Leader Congresswoman Nancy Pelosi (D-CA) to retract her  defamatory,ugly and erroneous name calling of Senior Presidential Strategist Stephen Bannon. Pelosi, who formerly served as House Speaker and Majority Leader (2007-2011), is the highest ranking female Congressional leader in U.S political history.  Congresswoman Pelosi thus serves as an important role model for women throughout the country.  It is beneath the dignity of her office, and sets a very bad example for the nation, for her to engage in name-calling – especially when she hurls attacks that are baseless and untrue.  We are thus deeply disappointed that Congresswoman Pelosi repeatedly defamed presidential advisor and National Security Council member Stephen Bannon on February 2, 2017 by wrongly and falsely calling him a “white supremacist.”

Mr. Bannon also hired and worked closely with persons of every race and creed at Breitbart (gay, straight, white, black, Orthodox Jewish, Christian, Muslim, etc., etc.), again confirming that he is definitively not a “white supremacist.”

Congresswoman Pelosi has often spoken about the importance of improving “civility” in politics and political campaigns.  In 2006, when she was about to become House Speaker, Congresswoman Pelosi promised that “civility” and “honesty” would be defining words for the new majority that she would lead.  (See “Nancy Pelosi Set to Be First Female Speaker,” by Juliet Eilperin, Wash. Post, Nov. 8, 2006.)  During her 2012 speech at the George H.W. Bush Presidential Library, Congresswoman Pelosi again discussed the importance of civility in our political discourse.  (See “At Bush Library, A Plea For Civility From Nancy Pelosi,” by Lisa Mascaro, Los Angeles Times, Feb. 2012.)

We urge Congresswoman Pelosi to restore her promise of civility and to retract the slanderous name-calling  against Mr. Bannon.

We would love to hear from you! Please fill out this form and we will get in touch with you shortly.
Trending Z
News February 7, 2017
ZOA Condemns U.S. State Dept. & U.S. Amb. Nides For Siding with Antisemitic, Discriminatory Palestinian & Hamas Terrorists re: the Temple Mount, Violating Jews’ Religious Freedom
Uncategorized February 7, 2017
FLASH: ISRAEL-JORDAN PEACE TREATY (1994) GUARANTEES JEWS ACCESS TO THE TEMPLE MOUNT – LET MY PEOPLE PRAY
Uncategorized February 7, 2017
ZOA Analysis: Most American Rabbis Who Are Boycotting Some Israeli Ministers Are From Extremist Left Wing Groups (J Street; T’ruah; JVP)
Uncategorized February 7, 2017
Israel’s “Right of Return” Grandparent Clause is De-Judaizing the Jewish State – Eliminate It
Center for Law & Justice
We work to educate the American public and Congress about legal issues in order to advance the interests of Israel and the Jewish people.
We assist American victims of terrorism in vindicating their rights under the law, and seek to hold terrorists and sponsors of terrorism accountable for their actions.
We fight anti-Semitism and anti-Israel bias in the media and on college campuses.
We strive to enforce existing law and also to create new law in order to safeguard the rights of the Jewish people in the United States and Israel.
Our Mission
ZOA STATEMENT
The ZOA speaks out for Israel – in reports, newsletters, and other publications. In speeches in synagogues, churches, and community events, in high schools and colleges from coast to coast. In e-mail action alerts. In op-eds and letters to the editor. In radio and television appearances by ZOA leaders. Always on the front lines of pro-Israel activism, ZOA has made its mark.
Related Articles
OP-ED ZOA: Brookings Institution Must Return $14 Million To Qatar, Supporter of ISIS