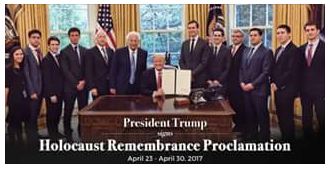 The ZOA commemorates Holocaust Remembrance Day to never forget the six million precious Jewish souls that were lost due to unbridled hatred of the Jewish people by the German Nazis and others.  A callous and uncaring world whose own indifference and even enmity toward Jews allowed this to happen.  Millions of beautiful Jewish people could have been saved if actions were taken. They were not.  Not by America, not by England, not by anyone.

I, Morton Klein, am a child of Holocaust survivors, born in a displaced persons camps in Gunzburg, Germany.  My parents, Rabbi Herman from Volosk, Czechoslovakia and Sarah Klein, from Tomazov-Lubelski, Poland met in that DP camp and married.  I was the first child born there.  My parents were religious Hasidic Jews and ardent Zionists.  Throughout their lives (my mother turns 95 this year), they lived and died with news from Israel.

I personally know full well the ultimate horrors that can culminate from breathtaking, mindless hatred.  I lost all my grandparents, aunts, uncles and cousins on my father’s side.  My father, who survived Auschwitz, lost his first family.  He weighed 85 pounds at liberation.  My mother lost over half of her family to Hitler and Eichmann’s diabolical nightmare.  In addition, the Germans murdered gays, Jews, the mentally ill, the physically handicap, Gypsies, and others.

Nevertheless, we at ZOA are powerfully inspired by the strength, courage, and remarkable resilience of the Jewish people to rise from the ashes of the Holocaust to become extraordinarily productive contributors to the world in virtually every field – all of which is capped by the miraculous rebirth of the Jewish State of Israel.  And ZOA will continue to do all we can to fight the increasing scourge of Jew-hatred and the ongoing Arab Islamic war against Israel. We will also speak out against prejudice, and irrational hatred and violence against any people in all corners of the world.

We pray that G-d will bless us to help us achieve a safer and more loving and tolerant world.

ZOA is pleased to also distribute the heartfelt comments of the President of the United States commemorating the Holocaust:

“On Yom HaShoah the day of Holocaust Remembrance and during this Week of Remembrance, we honor the victims of the Holocaust and Nazi persecution.

The Holocaust was the state-sponsored, systematic persecution and attempted annihilation of European Jewry by the Nazi regime and its collaborators. By the end of World War II, six million Jews had been brutally slaughtered. The Nazis also targeted other groups for persecution and murder, including Roma (Gypsies), persons with mental and physical disabilities, Soviet prisoners of war, Jehovah’s Witnesses, Slavs and other peoples of Europe, gays, and political opponents.

The United States stands shoulder to shoulder with the survivors of the Holocaust, their families, and the descendants of those who were murdered. We support the Jewish diaspora and the State of Israel as we fulfill our duty to remember the victims, honor their memory and their lives, and celebrate humanity’s victory over tyranny and evil. Holocaust survivors, despite scars from history’s darkest days, continue to inspire us to remember the past and learn from its lessons. By sharing their experiences and wisdom, they continue to fuel our resolve to advance human rights and to combat anti-Semitism and other forms of hatred.

During this week in 1945, American and Allied forces liberated the concentration camp at Dachau and other Nazi death camps, laying bare to the world the unconscionable horror of the Holocaust. We must remain vigilant against hateful ideologies and indifference. Every generation must learn and apply the lessons of the Holocaust so that such horror, atrocity, and genocide never again occur. It is our solemn obligation to reaffirm our commitment to respecting the fundamental freedoms and inherent dignity of every human being.

Let us join together to remember and honor the victims of the Holocaust and Nazi persecution. We express our eternal gratitude to the liberators who selflessly risked their lives to save those of others, and we pledge to never be bystanders to evil.

We must never forget.”

We would love to hear from you! Please fill out this form and we will get in touch with you shortly.
Trending Z
News April 25, 2017
ZOA Deplores that Pres. Trump Dined with Jew-Haters Kanye West & Nick Fuentes, and Demands he Condemn Them
News April 25, 2017
Newsweek Op-Ed by ZOA’s Mort Klein: ZOA Honoring Trump as the Greatest President Ever for Israel and American Jews
Uncategorized April 25, 2017
ZOA Honors Trump With Rarely Given Herzl Award for His Great Pro-Israel Work – Joins Ranks of Balfour, Truman, Begin, Meir, Ben-Gurion
News April 25, 2017
ZOA Responds to Questions About Pres. Trump, Kanye West, Fuentes, etc. Issue
Center for Law & Justice
We work to educate the American public and Congress about legal issues in order to advance the interests of Israel and the Jewish people.
We assist American victims of terrorism in vindicating their rights under the law, and seek to hold terrorists and sponsors of terrorism accountable for their actions.
We fight anti-Semitism and anti-Israel bias in the media and on college campuses.
We strive to enforce existing law and also to create new law in order to safeguard the rights of the Jewish people in the United States and Israel.
Our Mission
ZOA STATEMENT
The ZOA speaks out for Israel – in reports, newsletters, and other publications. In speeches in synagogues, churches, and community events, in high schools and colleges from coast to coast. In e-mail action alerts. In op-eds and letters to the editor. In radio and television appearances by ZOA leaders. Always on the front lines of pro-Israel activism, ZOA has made its mark.
Related Articles
OP-ED ZOA Praises Cong. Sherman for Urging U.S. Education Dept. to Include Anti-Israelism as Anti-Semitism