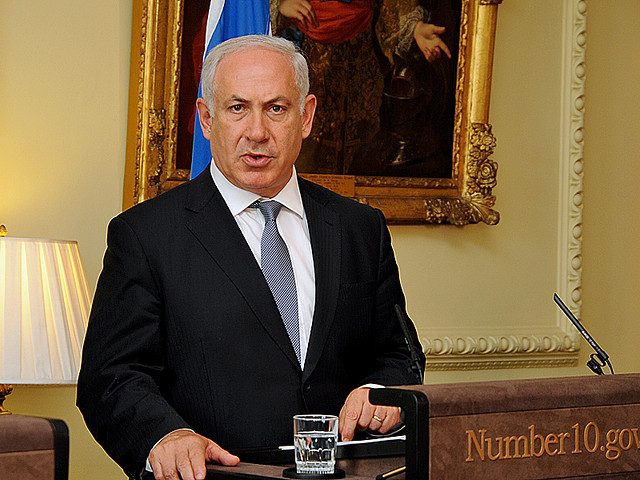 The Zionist Organization of America (ZOA) has praised Israeli Prime Minister Benjamin Netanyahu for condemning the international community in his speech today to the United Nations General Assembly over its utter silence regarding continuing Iranian threats to destroy Israel. Iran is already increasing funding for the Assad regime in Syria, Hamas in Gaza, Hezbollah in Lebanon, and providing sophisticated missiles and arms to them as well. It is also seeking to arm the Arabs in Judea/Samaria. Mr. Netanyahu also condemned Palestinian Authority (PA) president Mahmoud Abbas for refusing to negotiate peace, Abbas having refused talks with Israel for all but one week in the last six years. Abbas has also rejected a 2008 Israeli offer of Palestinian statehood in virtually all of Judea/Samaria, all of Gaza and the eastern half of Jerusalem. While continuing to promote hatred and murder of Jews in his speeches, schools, and children’s camps, Abbas also provides generous pensions to the families of Jew-killers confined in Israeli prisons.

If Iran’s terror proxies were firing thousands of rockets at your cities, perhaps you’d be more measured in your praise.

“Seventy years after the murder of six million Jews, Iran’s rulers promise to destroy my country.

Perhaps you can now understand why Israel is not joining you in celebrating this deal.

If Iran’s rulers were working to destroy your countries, perhaps you’d be less enthusiastic about the deal.

If Iran’s terror proxies were firing thousands of rockets at your cities, perhaps you’d be more measured in your praise.

And if this deal were unleashing a nuclear arms race in your neighborhood, perhaps you’d be more reluctant to celebrate.

But don’t think that Iran is only a danger to Israel.

Besides Iran’s aggression in the Middle East and its terror around the world, Iran is also building intercontinental ballistic missiles whose sole purpose is to carry nuclear warheads.

Now remember this: Iran already has missiles that can reach Israel.

So those intercontinental ballistic missiles that Iran is building – they’re not meant for us.

They’re meant for you.

It’s not easy to oppose something that is embraced by the greatest powers in the world.

Believe me, it would be far easier to remain silent.

But throughout our history, the Jewish people have learned the heavy price of silence.

And as the Prime Minister of the Jewish State, as someone who knows that history,

I refuse to be silent.

I’ll say it again: The days when the Jewish people remained passive in the face of genocidal enemies –– those days are over.” (‘Full Transcript: Prime Minister Netanyahu’s Speech at the United Nations General Assembly, 2015 (VIDEO)’, Algemeiner Journal, October 1, 2015).

ZOA National President Morton A. Klein said, “We praise the Israeli Prime Minister for his speech today. Though he mentioned several other deeply important matters, by far the most significant was his absolutely correct and appropriate emphasis on the deafening silence from leaders around the world who have said nothing, much less condemned, continuing Iranian threats of genocide against the Jews, embodied in the Jewish state of Israel.

“This is a diplomatic Kristallnacht. This is a repeat of the 1930s when Nazi Germany’s extraordinary anti-Semitic polices and persecution of Jews raised little interest or protest, which helped to persuade Hitler that he could proceed with their mass murder.

“When the world welcomes a nuclear deal that paves a path to Iran acquiring the weapons to act on its genocidal intentions against the Jewish state of Israel and Iran’s calls for Israel’s destruction are met with silent indifference, then the world sends the same message of practical encouragement to the extremist Iranian Shia Islamic regime.”

We would love to hear from you! Please fill out this form and we will get in touch with you shortly.
Trending Z
News October 1, 2015
At ZOA Gala Secy Pompeo Gave the Greatest, Most Pro-Israel Speech Ever Delivered by a Public Official
News October 1, 2015
Dershowitz in Arutz 7: NYC’s Temple Emanu-El Silences a Pro-Israel Voice & Promotes an Anti-Israel Voice
Uncategorized October 1, 2015
Jewish Press: Has Deborah Lipstadt Undercut Both Herself and Future Antisemitism Envoys?
News October 1, 2015
NEW YORK POST: Democratic Leaders’ Shocking Silence Over Attacks on Israel by Fellow Dems
Our Mission
ZOA STATEMENT
The ZOA speaks out for Israel – in reports, newsletters, and other publications. In speeches in synagogues, churches, and community events, in high schools and colleges from coast to coast. In e-mail action alerts. In op-eds and letters to the editor. In radio and television appearances by ZOA leaders. Always on the front lines of pro-Israel activism, ZOA has made its mark.
Center for Law & Justice
We work to educate the American public and Congress about legal issues in order to advance the interests of Israel and the Jewish people.
We assist American victims of terrorism in vindicating their rights under the law, and seek to hold terrorists and sponsors of terrorism accountable for their actions.
We fight anti-Semitism and anti-Israel bias in the media and on college campuses.
We strive to enforce existing law and also to create new law in order to safeguard the rights of the Jewish people in the United States and Israel.
Related Articles
OP-ED ZOA Mourns the Passing of Mayor Ed Koch