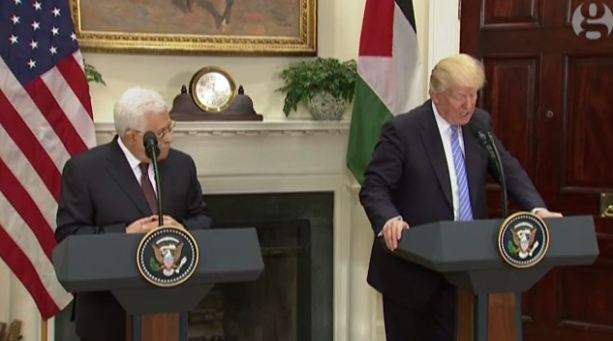 At the joint President Trump – Mahmoud Abbas press conference on Wednesday (May 3, 2017), President Trump identified a key impediment to real peace, when President Trump stated: “there cannot be lasting peace unless the Palestinian leaders speak in a unified voice against incitement to violate — and violence and hate.  There’s such hatred.”  Shockingly, in response, Palestinian Authority (PA) dictator Abbas blatantly lied to President Trump:  Abbas made the absurd claim – which everyone knows is false – that “we are raising our youth, our children, our grandchildren on a culture of peace.”

Abbas used his portion of Wednesday’s joint press conference to promote giving “a great impetus to the Arab Peace Initiative” – the misleadingly-named plan for Israel’s destruction.

Similarly, the PA and Abbas rejected and treated with utter disdain President Trump’s important, request to Abbas to end the PA/PLO’s payments to Palestinian-Arab terrorists for murdering Jews.  At President Trump’s May 3 meeting with Abbas, “President Trump emphasized the importance of [Abbas] making a clear commitment to preventing inflammatory rhetoric and to stopping incitement, and to continue strengthening efforts to combat terrorism. President Trump raised his concerns about payments to Palestinian prisoners in Israeli jails who have committed terrorist acts, and to their families, and emphasized the need to resolve this issue.”  (“White House Readout of the Meeting Between President Donald J. Trump and President Mahmoud Abbas of the Palestinian Authority,” May 3, 2017.)  Shortly afterwards, during an interview on Israel radio, PA official Nabil Shaath (Abbas’s senior foreign policy adviser) rejected President Trump’s request and insultingly described President Trump’s important request as “mad.”  (See “Palestinian Authority Rejects Trump’s ‘Mad’ Request To End Terrorists’ Payments,” by Jerusalem Post Staff, Yasser Okbi, Maariv Hashavua, May 4, 2017.)

In addition, Abbas also demonstrated that he is not serious about living peacefully with the Jewish State in even more ways:  Abbas promoted the nonstarter Orwellian-named “Arab Peace Initiative” plan for Israel’s destruction; and sought the antithetical-to-peace release from Israeli prisons of convicted Palestinian-Arab terrorists who murdered innocent Jews and Americans.

As ZOA and the press predicted would occur (See “ZOA: Abbas Promotes So-Called “Arab Peace Initiative” Which is a Nonstarter,” May 3, 2017), Abbas used his portion of Wednesday’s joint press conference to promote giving “a great impetus to the Arab Peace Initiative” – the misleadingly-named plan for Israel’s destruction.  During his press conference speech, Abbas enumerated all the same old nonstarter elements of the “Arab Peace Initiative”:  Abbas demanded that Israel must retreat to the suicidal 1949 Armistice lines (which Abbas called “1967 borders” although these lines are not legally recognized borders); create a Palestinian Arab state in Israel’s heartland (which would be a terrorist state); dismember the eternal Jewish capital of Jerusalem and make the area containing Judaism’s holiest sites the capital of “Palestine”; and let millions of descendants of non-indigenous, hostile “Palestinian Arab refugees” move into Israel to overrun the Jewish State.  Following the “Arab Peace Initiative” playbook, Abbas indicated that if Israel makes all these one-sided suicidal concessions of tangible lands and rights, this might “lead to” “normalization” of relations – a vague, meaningless notion.

In addition, Abbas spoke during the press conference of resolving “the issue of the prisoners” – a euphemistic way of demanding that Israel must release Palestinian Arab terrorists convicted of murdering innocent Jewish and American citizens.

In a worthwhile op-ed yesterday, the mayor of Efrat, Israel explained that Abbas’s Palestinian Authority arrests Palestinian Arabs for the “crime” of drinking coffee with their Jewish neighbors in Judea/Samaria.  In sum, in Abbas’s PA, daring to try to peacefully co-exist with Jews is a crime, and murdering Jews is rewarded.  And sadly, nothing has changed.  (See “Why Opening the White House Doors to Mahmoud Abbas is a Losing Proposition for Mideast Peace,” by Oded Revivi, Los Angeles Times, May 3, 2017.)

We would love to hear from you! Please fill out this form and we will get in touch with you shortly.
Trending Z
News May 4, 2017
ZOA Condemns U.S. State Dept. & U.S. Amb. Nides For Siding with Antisemitic, Discriminatory Palestinian & Hamas Terrorists re: the Temple Mount, Violating Jews’ Religious Freedom
News May 4, 2017
ZOA’s Klein JPost Op-Ed: There is Nothing Extreme About Israel’s New Government
Uncategorized May 4, 2017
FLASH: ISRAEL-JORDAN PEACE TREATY (1994) GUARANTEES JEWS ACCESS TO THE TEMPLE MOUNT – LET MY PEOPLE PRAY
Uncategorized May 4, 2017
ZOA Analysis: Most American Rabbis Who Are Boycotting Some Israeli Ministers Are From Extremist Left Wing Groups (J Street; T’ruah; JVP)
Center for Law & Justice
We work to educate the American public and Congress about legal issues in order to advance the interests of Israel and the Jewish people.
We assist American victims of terrorism in vindicating their rights under the law, and seek to hold terrorists and sponsors of terrorism accountable for their actions.
We fight anti-Semitism and anti-Israel bias in the media and on college campuses.
We strive to enforce existing law and also to create new law in order to safeguard the rights of the Jewish people in the United States and Israel.
Our Mission
ZOA STATEMENT
The ZOA speaks out for Israel – in reports, newsletters, and other publications. In speeches in synagogues, churches, and community events, in high schools and colleges from coast to coast. In e-mail action alerts. In op-eds and letters to the editor. In radio and television appearances by ZOA leaders. Always on the front lines of pro-Israel activism, ZOA has made its mark.
Related Articles
OP-ED BY: ZOA Staff ZOA Praises Sen. Cruz & 31 Legislators Call For Closure of PLO Washington Office

The Zionist Organization of America (ZOA) praises Senator Ted Cruz (R–TX) and 31 other legislators in their call for the closure of the PLO Office in Washington, D.C. The ZOA supports their position, since Mahmoud Abbas’ Palestinian Authority (PA) has never fulfilled its obligations under the Oslo Accords to outlaw terrorist groups, extradite terrorists, confiscate […]

Morton A. Klein, president of the Zionist Organization of America (ZOA) released the following statement: The Zionist Organization of America (ZOA) praises the American Historical Association (AHA) for overwhelmingly defeating an anti-Israel BDS (Boycott, Divestment, Sanctions) resolution , during AHA’s annual meeting in Atlanta this month.  The vote was a resounding 111 to 50.   The […]