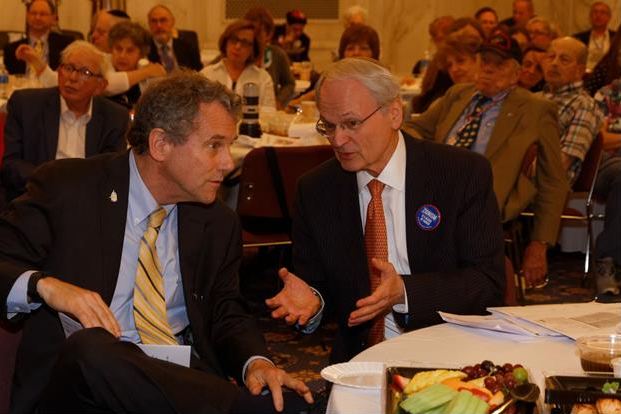 Last Tuesday, Brown appeared at a Zionist Organization of America (ZOA) event in Washington, D.C., and bashed President Donald Trump’s White House and Breitbart News Network. He spoke after Dr. Sebastian Gorka, a former Breitbart News national security editor who is now a senior White House aide. Now, Brown is under fire as both the head of ZOA and the Republican candidate for U.S. Senate in Ohio in 2018—Ohio Treasurer Josh Mandel—are calling him out publicly as he continues to refuse to apologize and correct his inaccurate statements.

Mort Klein: But I’ll tell you where this phony image comes from, when Steve Bannon said that ‘Breitbart is a platform for the alt-right,’ Steve Bannon meant a platform for those who are anti-establishment, anti-the mainstream people. Too many people thought wrongly [when he said that] that ‘alt-right’ meant Neo-Nazis and David Dukes.

“I listened to the words of Mr. Gorka, I’m not going to engage in a political debate but a conversation I had with the Prime Minister of Israel in a small group—a bipartisan group—about a month ago, I told the Prime Minister ‘I know you’re happy with this new president standing up on Israel. I know you’re happy with his support on QME [Qualitative Military Edge]. I know you’re happy with his support on sanctions legislation as I am but,’ I said, ‘there are a whole lot of members of the Senate in both parties and a whole lot of people in my state that are very concerned about the bigotry and the anti-Semitism in the White House,’” Brown said when he took the stage at ZOA. “And I see, I know that doesn’t necessarily play well with this group but you invited me to speak my mind. I know that the beginning of Donald Trump’s career in politics was continuing to insist that year after year after year on something that I know the Jewish tradition found abhorrent and that is that this president of the United States [Barack Obama] wasn’t born here. I know that Mr. Gorka mentioned Stephen Bannon—I even saw some people cheer when he mentioned Stephen Bannon—I think we know the history of Breitbart.”

The audience at ZOA—the oldest pro-Israel advocacy group in the United States—began loudly booing Brown’s comments, and Brown thought the audience might have been booing Bannon.

“I’m not sure if those cheers are for Bannon or cheers are for me, they may be more for Bannon and I’m okay with that,” Brown said. “But I also know that—I also know—I also know I could come in here and say what I believe about Israel and you would like that and I will always stand strong on Israel. But I also feel it’s my duty to speak out when I see what is more and more common in this country, whether it’s issues of race, issues of religion that frankly bother me. I grew up in a Lutheran family where my faith is important to me. I also grew up having a number of—a good bit of exposure to the Jewish faith. I know the history of Judaism. I know the history of the belief and fight for social justice that your faith teaches better than perhaps any of us are exposed to. I am very, very appreciative of that. I am very worried about this president’s attitudes towards people who are a little bit different and that’s why I say that.”

“We were deeply disappointed by Senator Brown’s attacks on President Trump, Steve Bannon, Sebastian Gorka and others that serve in this White House,” Schwartz said. “We work closely with Mr. Bannon and Dr. Gorka; they are true friends of the Jewish state of Israel. The same cannot be said of Senator Brown, a supporter of the catastrophic Iran Deal.”

This weekend on Breitbart News Sunday on SiriusXM Patriot Channel 125 on Sunday evening, Breitbart News offered Sen. Brown the opportunity to appear on the radio program for an hourlong special on these comments—and the ability to retract the inaccurate comments and apologize. Brown did not make an appearance on the show.

Instead, ZOA president Mort Klein and others including Brown’s GOP opponent in next year’s Ohio U.S. Senate race did appear to denounce Brown further.

“This was the Zionist Organization of America, ZOA, mission to Washington lobbying for strong U.S.-Israel relations,” Klein told Breitbart News Sunday. “That’s why we were there. That was the focus. That’s all we wanted to talk about. In fact, when I was sitting with him at the table before he went up, I said ‘Sen. Brown this is a great opportunity to let our people—hundreds of people from all over the country—know that Democrats are also pro-Israel.’ Too many people think it’s only Republicans. Even though the Democrats are not as strong for Israel, there are many good Democrats who are good on Israel. I said ‘this is the time to let people know you are a strong supporter and you are a Democrat.’ I told him that and yet all he did when he came up was when he got up to speak was attack Donald Trump, attack the administration as filled with bigots and anti-Semites, and attack Steve Bannon. Steve Bannon, Breitbart has never had a neo-Nazi or racist or David Duke type article ever. I’ve never seen it. The articles I see are articles fighting anti-Semitism and articles telling the truth about the Arab-Islamic war against Israel and promoting Israel. But I’ll tell you where this phony image comes from, when Steve Bannon said that ‘Breitbart is a platform for the alt-right,’ Steve Bannon meant a platform for those who are anti-establishment, anti-the mainstream people. Too many people thought wrongly [when he said that] that ‘alt-right’ meant Neo-Nazis and David Dukes. Frankly, I’ve urged him to make it clear that he never meant that and that’s where this distortion of meaning about Steve Bannon came. But what’s shocking to me is that even if this were true, we were there about Israel and not there about Donald Trump or Steve Bannon. So it showed to me the intense enmity that Sherrod Brown and many Democrats have toward the Trump administration—a really irrational enmity that makes no sense. In fact, Breitbart—as you mentioned—hired an Orthodox Jew to be head of its Jerusalem station in Israel and he has hired two other Orthodox Jews to work with you over the years. Joel Pollak is still working with you, who is an Orthodox Jew. Anti-Semites rarely hire Orthodox Jews.”

We would love to hear from you! Please fill out this form and we will get in touch with you shortly.
Trending Z
News June 14, 2017
New Biden Nominees Opposed Abraham Accords & Involved in Israeli Election Interference
Uncategorized June 14, 2017
ZOA Letter to DOJ & FBI on New “Mapping Project” Antisemitic Threat by ZOA Pres. Morton Klein, Dir. of Research/Special Projects Liz Berney, Esq., Dir. Center for Law & Justice Susan Tuchman, Esq.
News June 14, 2017
ZOA’s Condemnation of Black Lives Matter Defended by JNS’ Tobin: Jews Supporting BLM Empowered Antisemitism
Op-Ed June 14, 2017
ZOA’s Mort Klein JPost Op-Ed: BDS Mapping Project Targets Every Jew, Including Left Wing, Israelophobic Jews
Center for Law & Justice
We work to educate the American public and Congress about legal issues in order to advance the interests of Israel and the Jewish people.
We assist American victims of terrorism in vindicating their rights under the law, and seek to hold terrorists and sponsors of terrorism accountable for their actions.
We fight anti-Semitism and anti-Israel bias in the media and on college campuses.
We strive to enforce existing law and also to create new law in order to safeguard the rights of the Jewish people in the United States and Israel.
Our Mission
ZOA STATEMENT
The ZOA speaks out for Israel – in reports, newsletters, and other publications. In speeches in synagogues, churches, and community events, in high schools and colleges from coast to coast. In e-mail action alerts. In op-eds and letters to the editor. In radio and television appearances by ZOA leaders. Always on the front lines of pro-Israel activism, ZOA has made its mark.
Related Articles
OP-ED BY: Staff Times of Israel Article: ZOA Criticizes Jewish Groups for Opposing or Silence on Netanyahu Iran Speech

The right-wing Zionist Organization of America suggested Monday that some American-Jewish groups’ behavior surrounding Prime Minister Benjamin Netanyahu’s planned address to Congress is similar to that of the “Jewish leaders of the 1930s,” in reference to the lack of unity and organization in the American-Jewish community in the years leading up to and during the […]

Ted Cruz loves Orthodox Jews — and they love him back. It’s a dynamic that allows the hard-line conservative presidential contender — a practicing Southern Baptist himself — to tap Orthodox donors more aggressively than any other 2016 candidate, as he zeros in on a small but potentially winnable slice of an otherwise deeply Democratic […]