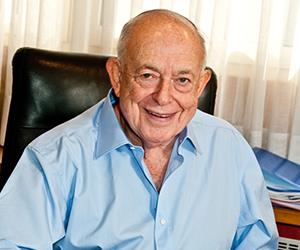 The chaos enveloping American Jewry since the election of President Donald Trump—which many predicted would be merely a passing phenomenon—has in fact increased exponentially over the past few months. It is concurrent with the turmoil prevailing at all levels inside the new administration.

However, it is precisely at such a turbulent time, when the leadership of American Jewry should assume a stabilizing role, that it seems to be losing control.

Many Jewish leaders concentrate more on vilifying Trump than securing and promoting their communal interests. They unashamedly abuse their Jewish institutional roles to promote far-left and liberal agendas, even labeling their opponents as anti-Semites to achieve their goals.

Whether one agrees or disagrees with Klein, he is a dedicated Zionist whose parents were Holocaust survivors. He was only included in this list because he is a strong opponent of far-left and liberal causes… To bracket this man with Nazis is obscene and should never have been published in a Jewish media outlet that purports to be mainstream.

That is not to deny that there has always been a segment of American society which was fiercely racist and anti-Semitic. The shocking displays of hatred and the violence emanating from the recent national gathering of white supremacists in Charlottesville, Virginia testify to this. And while there was violence from the “Antifa” far left elements, it is indisputable that the violence emanated from vile racists carrying Nazi flags.

Vice President Mike Pence denounced the white supremacists and racists but, to his discredit, Trump’s initial response was only to condemn “in the strongest possible terms this egregious display of bigotry, hatred and violence on many sides.” Without explicitly condemning the white supremacists, he was perceived as applying moral equivalence to both sides, which most Americans and Jews of all political persuasions would consider outrageous. It was only two days later that Trump belatedly explicitly denounced the racist hate groups such as White Supremacists, Neo-Nazis and KKK as criminals and thugs “repugnant to everything we hold dear.”

The threats from the radical Right must not be tolerated. Yet despite the massive exposure they received, these fascist and racist groups represent a minute segment of society and their influence is marginal when compared to the leftist anti-Semites. The latter, who are vastly understated, promote the boycott, divestment and sanctions movement and have transformed campuses into anti-Israel and anti-Semitic platforms.

Moreover, there are Jewish community leaders who have allied themselves with far-left campaigns headed by vicious anti-Israel elements, arguing that anti-Israel agitators should not be excluded as partners in broader campaigns for social justice. There are also calls for BDS proponents and anti-Israel Jewish groups to be included in the “big tent.”

The worst organizational offender in this area is the Anti-Defamation League, which lost its credibility after Jonathan Greenblatt, a former aide to President Barack Obama, became CEO and used the organization to promote his liberal agenda. He is supported by leaders of the Reform and Conservative movements who uninhibitedly pursue partisan positions, as though their followers were all anti-Trump zealots. Their toleration of leftist anti-Israel agitators is frequently accompanied by public criticism of Israeli policies.

Although the racist demonstration in Charlottesville is evidence that there are threats from the Right, the ADL concentrates almost exclusively on right-wing extremists, conveying the impression that anti-Semitism primarily emanates from these quarters. The ADL even refused to break with the Black Lives Matter movement, despite the rabidly anti-Israel clauses in its objectives, alleging that the offending clauses were inserted by a small minority.

The ADL also blamed Trump’s immigration policies and indifference to racists for the surge of bomb threats against Jewish institutions. Yet when it transpired that the threats originated from an American leftist and a mentally unstable Israeli, the ADL did not rescind its accusations. It continuously understates and fails to protest the growing numbers of anti-Israel elements who now thrive within the left-wing ranks of the Democratic Party and are dominant on many campuses.

An extreme example of anti-Semitism clearly not emanating from the white-supremacist Right was the case of American imam, Ammar Shahin, who, in a sermon delivered at the Islamic Center of Davis in California on July 21, called for the annihilation of the Jewish people and “the liberation of Al-Aqsa mosque” from “the filth of the Jews.” He described Jews as “wicked” and said, “O Allah, destroy them and do not spare their young or elderly. … O Allah, turn Jerusalem and Palestine into a graveyard for Jews.” He made similar outrageous remarks on other occasions.

After the media quoted him, there were cries of outrage and calls for his dismissal. Under pressure, the imam conceded, “I said things that were hurtful to Jews. This was unacceptable. … I am deeply sorry for the pain inflicted. The last thing that I would do is intentionally hurt anyone, Muslim, Jewish or otherwise. It is not in my heart.” The imam, however, did not retract his obscene remarks.

The ADL, which has been smearing conservatives as anti-Semites, failed to call for the ouster of the imam or call on the authorities to prosecute him for inciting violence. Instead, an ADL spokesman “welcomed” the “apology,” expressing “the hope that the imam will continue to learn from others about why his words were so dangerous.” Such a response from an organization whose raison d’etre is to lead the struggle against anti-Semitism was utterly pathetic and even contemptable.

There are many similar examples of acceptance of “progressive” anti-Zionists and anti-Semites, such as the praise that many liberal Jews have heaped on Linda Sarsour, the Palestinian-American head of the anti-Trump Women’s March and who publicly embraced convicted terrorist Rasmea Odeh, and the petition by over 200 progressive rabbis who had the chutzpah to condemn Israel for denying entry to open supporters of BDS.

Sectors of the Jewish media also contribute to this atmosphere. The most extreme example was a recent article published in the left-leaning Forward by editorial columnist Steven Davidson. Davidson listed 19 people who he thought Jews should worry more about than Sarsour. Aside from Iranian Supreme Leader Ayatollah Ali Khamenei and the leaders of Hezbollah and Hamas who are listed toward the end of the article, all the others except one are Nazis or racists or right-wingers whom Davidson dislikes, such as Trump’s strategist Steve Bannon. Leftist anti-Semites are given a pass. But what makes this article scandalous is that the sixth person listed is Morton Klein, head of the Zionist Organization of America. Unbelievably, Klein is included with Islamist terrorists, Louis Farrakhan, David Duke and other anti-Semites.

Whether one agrees or disagrees with Klein, he is a dedicated Zionist whose parents were Holocaust survivors. He was only included in this list because he is a strong opponent of far-left and liberal causes. His organization was a charter member of the Conference of Presidents of Major American Jewish Organizations and he is highly respected in Israel. To bracket this man with Nazis is obscene and should never have been published in a Jewish media outlet that purports to be mainstream. But other than Alan Dershowitz, who rightly described the article as the “most despicable ever in Jewish media,” there was a curtain of silence from most Jewish leaders.

The editor, who, to the best of my knowledge, has yet to issue an apology for publishing this outrageous article, should either resign or be dismissed.

The tension between Israel and large segments of American Jewry was compounded when, to retain his government, Netanyahu capitulated to haredi extremist extortion and rescinded the deal with the non-Orthodox regarding their right to allow mixed services at a designated area at the Western Wall.

While this is grounds for outrage by the non-Orthodox, prayer at the Western Wall has until now only attracted marginal numbers of progressives and this issue has been blown totally out of proportion. The threats to boycott and divert funds from Israel is symptomatic of the erosion of support for the Jewish state.

It is surely not surprising that, in this environment, access to the U.S. administration by Jewish leaders is lower than it has been in over 50 years.

The Jewish community must take stock or it will lose all influence on government. The Trump administration appears divided over Israel, with the State Department resurrecting the Obama approach of appeasing the Arabs and applying moral equivalence to Israelis defending themselves and Palestinians engaging in incitement and terror. The Jewish leadership could have a positive influence in this area if it displayed political neutrality.

American Jewish leaders should wake up now before it is too late and their once influential community becomes marginalized.

This column was originally published in the Jerusalem Post and Israel Hayom.

Isi Leibler may be contacted at ileibler@leibler.com

We would love to hear from you! Please fill out this form and we will get in touch with you shortly.
Trending Z
Uncategorized August 24, 2017
FLASH: ISRAEL-JORDAN PEACE TREATY (1994) GUARANTEES JEWS ACCESS TO THE TEMPLE MOUNT – LET MY PEOPLE PRAY
Uncategorized August 24, 2017
ZOA Analysis: Most American Rabbis Who Are Boycotting Some Israeli Ministers Are From Extremist Left Wing Groups (J Street; T’ruah; JVP)
Uncategorized August 24, 2017
Israel’s “Right of Return” Grandparent Clause is De-Judaizing the Jewish State – Eliminate It
Uncategorized August 24, 2017
Exclusive: ZOA Accuses Ilhan Omar of Hating the U.S. ‘as Much as Israel,’ Lauds Kevin McCarthy for ‘Throwing Her Off the HFAC’
Center for Law & Justice
We work to educate the American public and Congress about legal issues in order to advance the interests of Israel and the Jewish people.
We assist American victims of terrorism in vindicating their rights under the law, and seek to hold terrorists and sponsors of terrorism accountable for their actions.
We fight anti-Semitism and anti-Israel bias in the media and on college campuses.
We strive to enforce existing law and also to create new law in order to safeguard the rights of the Jewish people in the United States and Israel.
Our Mission
ZOA STATEMENT
The ZOA speaks out for Israel – in reports, newsletters, and other publications. In speeches in synagogues, churches, and community events, in high schools and colleges from coast to coast. In e-mail action alerts. In op-eds and letters to the editor. In radio and television appearances by ZOA leaders. Always on the front lines of pro-Israel activism, ZOA has made its mark.
Related Articles
OP-ED Jewish Fraternity ZBT Says: Contact ZOA With Any Campus Anti-Semitism Issues