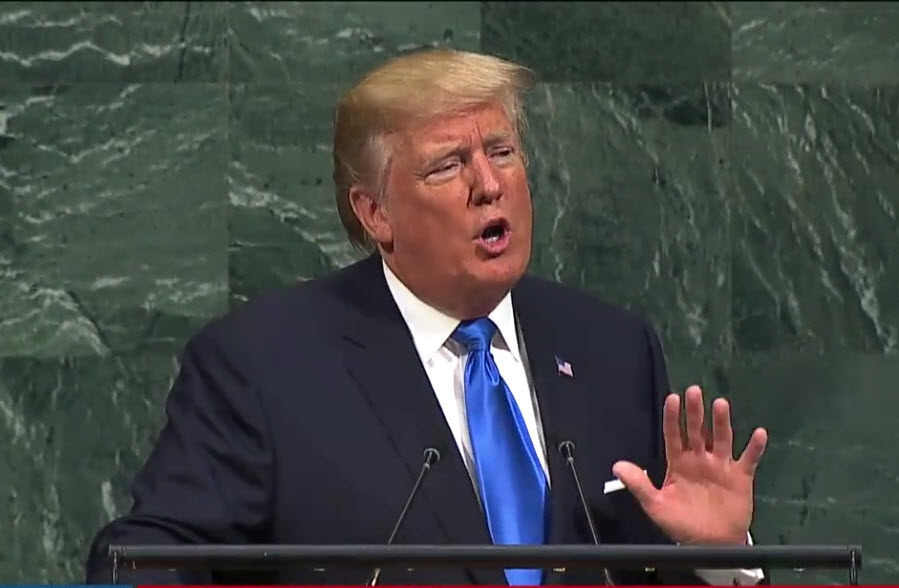 The ZOA praises President Donald Trump’s excellent, eloquent speech yesterday to the United Nations General Assembly. We especially appreciate the President’s statements calling out Iran’s missile launches and Iran’s “pursuit of death and destruction” and threats to America, Israel and others; the terrible Iran deal; and radical Islamic terrorists and “the Islamist extremism that inspires them” – and specifically naming radical Islamist terrorist groups including Hezbollah.  The president powerfully appealed to the world’s nations to “deny the terrorists safe haven, transit, funding, and any form of support for their vile and sinister ideology.” We also praise the president for noting that the “safe, responsible, and humanitarian approach” towards Syrian refugee involves our assistance to these refugees in their home region. We were also impressed by the president’s moving defense of the virtues of patriotism in combination with the pursuit of a peaceful world. (See “Full Text: Trump’s 2017 U.N. Speech Transcript,” Politico, Sept. 19, 2017.)

We especially appreciate the President’s statements calling out Iran’s missile launches and Iran’s “pursuit of death and destruction” and threats to America, Israel and others; the terrible Iran deal; and radical Islamic terrorists and “the Islamist extremism that inspires them” – and specifically naming radical Islamist terrorist groups including Hezbollah.

ZOA is also pleased that President Trump and Israeli Prime Minister Benjamin Netanyahu met the previous day and, as reported by the White House, “discussed their continued cooperation across a range of issues and stressed their goals of countering Iran’s malign influence in the region and resolving the Syria crisis in a manner consistent with American and Israeli security interests.” (“President Trump Meets with Prime Minister Netanyahu of Israel,” White House release, Sept. 18, 2017.)  We also commend the president for meeting with France’s President Macron to exchange views on the Iran deal and to discuss “how to curtail Iran’s destabilizing activities in the region.” (“Readout of President Donald J. Trump’s Meeting with President Emmanuel Macron of France,” White House release, Sept. 19, 2017.)

Key portions of the President’s excellent speech to the UN General Assembly are reprinted below:

“It is far past time for the nations of the world to confront another reckless regime — one that speaks openly of mass murder, vowing death to America, destruction to Israel, and ruin for many leaders and nations in this room.

“The Iranian government masks a corrupt dictatorship behind the false guise of a democracy. It has turned a wealthy country with a rich history and culture into an economically depleted rogue state whose chief exports are violence, bloodshed, and chaos. The longest-suffering victims of Iran’s leaders are, in fact, its own people.

“Rather than use its resources to improve Iranian lives, its oil profits go to fund Hezbollah and other terrorists that kill innocent Muslims and attack their peaceful Arab and Israeli neighbors. This wealth, which rightly belongs to Iran’s people, also goes to shore up Bashar al-Assad’s dictatorship, fuel Yemen’s civil war, and undermine peace throughout the entire Middle East.

“We cannot let a murderous regime continue these destabilizing activities while building dangerous missiles, and we cannot abide by an agreement if it provides cover for the eventual construction of a nuclear program. (Applause.) The Iran Deal was one of the worst and most one-sided transactions the United States has ever entered into. Frankly, that deal is an embarrassment to the United States, and I don’t think you’ve heard the last of it — believe me.

“It is time for the entire world to join us in demanding that Iran’s government end its pursuit of death and destruction. It is time for the regime to free all Americans and citizens of other nations that they have unjustly detained. And above all, Iran’s government must stop supporting terrorists, begin serving its own people, and respect the sovereign rights of its neighbors.

“The entire world understands that the good people of Iran want change, and, other than the vast military power of the United States, that Iran’s people are what their leaders fear the most. This is what causes the regime to restrict Internet access, tear down satellite dishes, shoot unarmed student protestors, and imprison political reformers.

“Oppressive regimes cannot endure forever, and the day will come when the Iranian people will face a choice. Will they continue down the path of poverty, bloodshed, and terror? Or will the Iranian people return to the nation’s proud roots as a center of civilization, culture, and wealth where their people can be happy and prosperous once again?

“The Iranian regime’s support for terror is in stark contrast to the recent commitments of many of its neighbors to fight terrorism and halt its financing.

“In Saudi Arabia early last year, I was greatly honored to address the leaders of more than 50 Arab and Muslim nations. We agreed that all responsible nations must work together to confront terrorists and the Islamist extremism that inspires them.

“We will stop radical Islamic terrorism because we cannot allow it to tear up our nation, and indeed to tear up the entire world.

“We must deny the terrorists safe haven, transit, funding, and any form of support for their vile and sinister ideology. We must drive them out of our nations. It is time to expose and hold responsible those countries who support and finance terror groups like al Qaeda, Hezbollah, the Taliban and others that slaughter innocent people.

“The United States and our allies are working together throughout the Middle East to crush the loser terrorists and stop the reemergence of safe havens they use to launch attacks on all of our people. . . .

“.  . . The actions of the criminal regime of Bashar al-Assad, including the use of chemical weapons against his own citizens — even innocent children — shock the conscience of every decent person. No society can be safe if banned chemical weapons are allowed to spread. That is why the United States carried out a missile strike on the airbase that launched the attack.

“We appreciate the efforts of United Nations agencies that are providing vital humanitarian assistance in areas liberated from ISIS, and we especially thank Jordan, Turkey and Lebanon for their role in hosting refugees from the Syrian conflict.

“The United States is a compassionate nation and has spent billions and billions of dollars in helping to support this effort. We seek an approach to refugee resettlement that is designed to help these horribly treated people, and which enables their eventual return to their home countries, to be part of the rebuilding process.

“For the cost of resettling one refugee in the United States, we can assist more than 10 in their home region. Out of the goodness of our hearts, we offer financial assistance to hosting countries in the region, and we support recent agreements of the G20 nations that will seek to host refugees as close to their home countries as possible. This is the safe, responsible, and humanitarian approach.”

We would love to hear from you! Please fill out this form and we will get in touch with you shortly.
Trending Z
Uncategorized September 20, 2017
ZOA Analysis: Most American Rabbis Who Are Boycotting Some Israeli Ministers Are From Extremist Left Wing Groups (J Street; T’ruah; JVP)
Uncategorized September 20, 2017
ZOA: Israel’s Reasonable Judicial Reform Proposals Are Good for Democracy, the Rule of Law and the Economy
Uncategorized September 20, 2017
Israel’s “Right of Return” Grandparent Clause is De-Judaizing the Jewish State – Eliminate It
News September 20, 2017
ZOA is Disappointed, Offended and Frightened by 211 U.S. House Votes Supporting Jew-Hating, Israel-Hating Rep. Ilhan Omar
Center for Law & Justice
We work to educate the American public and Congress about legal issues in order to advance the interests of Israel and the Jewish people.
We assist American victims of terrorism in vindicating their rights under the law, and seek to hold terrorists and sponsors of terrorism accountable for their actions.
We fight anti-Semitism and anti-Israel bias in the media and on college campuses.
We strive to enforce existing law and also to create new law in order to safeguard the rights of the Jewish people in the United States and Israel.
Our Mission
ZOA STATEMENT
The ZOA speaks out for Israel – in reports, newsletters, and other publications. In speeches in synagogues, churches, and community events, in high schools and colleges from coast to coast. In e-mail action alerts. In op-eds and letters to the editor. In radio and television appearances by ZOA leaders. Always on the front lines of pro-Israel activism, ZOA has made its mark.
Related Articles
OP-ED BY: ZOA Staff New Poll: Americans By 2-To-1 Margin Blame Palestinians For Talks’ Failure