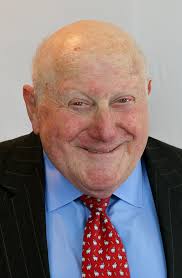 The Zionist Organization of America (ZOA) mourns the passing of our beloved Vice-Chair Irwin Hochberg.

Irwin was a Zionist giant who was a leader in numerous Jewish organizations from the UJA-Federation, New York to Israel Bonds and ZOA.

Irwin’s love of Israel and devotion to Israel and the Jewish people was second-to-none.  He spent almost all of his time and energies fighting for his beloved people and our ancient homeland.  Early on, Irwin understood the dangers of the Oslo accords, the Gaza withdrawal, and the Arab/Islamic War against Israel and the West.

He also worked tirelessly with Christian Zionists to facilitate their work on behalf of Israel. Irwin was an indefatigable leader of ZOA dealing with and improving numerous aspects of ZOA’s operations, including ZOA’s departments of Campus Activism, Law and Justice, and Government Relations in Washington D.C.

ZOA will be forever in Irwin’s debt for his wise counsel, extraordinary knowledge, and attention to the details of ZOA’s work.

Along with his brilliance came a great sense of humor and a disarming manner of dealing with serious issues.  He was a formidable advocate for his position and would readily sway those with a different opinion.

Irwin frequently spoke of his love and pride of his family, children and grandchildren.

Our heartfelt condolences are extended from the ZOA family to his sons Mitchell, Richard, Jonathan and the entire Hochberg family.

Irwin Hochberg is irreplaceable and will be sorely missed.

Chairman of the Board, ZOA

We would love to hear from you! Please fill out this form and we will get in touch with you shortly.
Trending Z
News October 16, 2017
ZOA Deplores that Pres. Trump Dined with Jew-Haters Kanye West & Nick Fuentes, and Demands he Condemn Them
Uncategorized October 16, 2017
ZOA Honors Trump With Rarely Given Herzl Award for His Great Pro-Israel Work – Joins Ranks of Balfour, Truman, Begin, Meir, Ben-Gurion
News October 16, 2017
ZOA Responds to Questions About Pres. Trump, Kanye West, Fuentes, etc. Issue
Uncategorized October 16, 2017
Zionist Organization of America Honors Donald Trump for Support for Israel, Jewish Community
Center for Law & Justice
We work to educate the American public and Congress about legal issues in order to advance the interests of Israel and the Jewish people.
We assist American victims of terrorism in vindicating their rights under the law, and seek to hold terrorists and sponsors of terrorism accountable for their actions.
We fight anti-Semitism and anti-Israel bias in the media and on college campuses.
We strive to enforce existing law and also to create new law in order to safeguard the rights of the Jewish people in the United States and Israel.
Our Mission
ZOA STATEMENT
The ZOA speaks out for Israel – in reports, newsletters, and other publications. In speeches in synagogues, churches, and community events, in high schools and colleges from coast to coast. In e-mail action alerts. In op-eds and letters to the editor. In radio and television appearances by ZOA leaders. Always on the front lines of pro-Israel activism, ZOA has made its mark.
Related Articles
OP-ED Fmr. Secy. Colin Powell: Defense Dept. Influences Presidential Policy