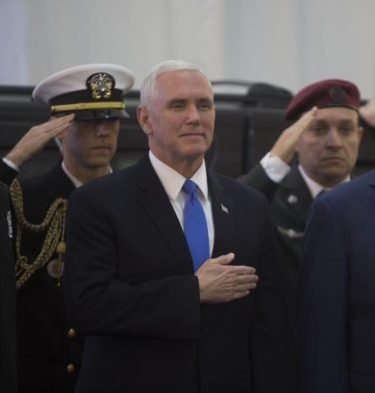 The Zionist Organization of America (ZOA) praises Vice-President Mike Pence for his extraordinary and powerful address to the Knesset in Jerusalem, Israel today.  In his speech, VP Pence reaffirmed American recognition that Jerusalem is Israel’s capital; described the Jewish people’s 3,000-year-old unbreakable bond with Jerusalem; properly referred to the Jewish homeland’s reestablishment as its rebirth of the modern state of Israel; stated that the Trump administration will transfer the U.S. Embassy in Israel from Tel Aviv to Jerusalem by the “end of next year”; called upon Mahmoud Abbas’ Palestinian Authority (PA) to return to the negotiating table; reaffirmed that the US will no longer certify the “ill-conceived” “disaster” Iran nuclear deal, and will immediately withdraw from the deal unless it is fixed; solemnly promised that the U.S. will ensure that the brutal, radical Shia Iranian regime will not obtain nuclear weapons; and declared that the U.S. will no longer tolerate the Iranian Islamist regime’s support of terrorism.

In his speech to the Knesset – the first ever delivered by an incumbent American Vice-President, Vice-President Pence said on the following matters:

Peace Negotiations: [President Trump is] fully committed to achieving a lasting peace between Israelis and Palestinians … if both sides agree, the United States will support a two-state solution. . . . Today, we strongly urge the Palestinian leadership to return to the table. Peace can only come through dialogue . . . any peace agreement must guarantee Israel’s ability to defend itself by itself.”

The Iran Nuclear Deal: “The Iran nuclear deal is a disaster and the United States of America will no longer certify this ill-conceived agreement. . . . [Trump’s decision to extend a sanctions waiver was done solely to gain time for the US Congress] and our European allies [in order to toughen penalties against the Islamic Republic] This is the last time: Unless the Iran nuclear deal is fixed, President Trump, the United States will withdraw from the Iran nuclear deal immediately.… Beyond the nuclear deal, we will also no longer tolerate its support of terrorism [and oppression of its people].… We are your friends and the day is coming when you will be free from the evil regime that suffocates your dreams and buries your hopes.”

The US/Israel Relationship: “America stands with Israel.  We stand with Israel because your cause is our cause, your values are our values, and your fight is our fight. We stand with Israel because we believe in right over wrong, in good over evil, and in liberty over tyranny. . . . In the story of the Jews, we’ve always seen the story of America. It is the story of an exodus, a journey from persecution to freedom, a story that shows the power of faith and the promise of hope … as the State of Israel celebrates the 70th anniversary of its birth. As you prepare to commemorate this historic milestone, I say, along with the good people of Israel, here and around the world: Shehecheyanu, v’kiyimanu, v’higiyanu la’z’man ha’zeh . . .  Thanks to the president’s leadership, the alliance between our two countries has never been stronger.… The United States of America will never allow Iran to acquire a nuclear weapon.”  (“Full text of Pence’s address at special session of Knesset Full text of Pence’s address at special session of Knesset,” Times of Israel, January 22, 2018.)

“The ZOA strongly praises Vice-President Mike Pence for his powerful and clear statements of support for Israel, the US/Israeli relationship, his clarification as to when the U.S. will be relocating its embassy from Tel Aviv to Jerusalem, and his strong position against the Islamic terrorist regime of Iran.

“President Trump’s decision to recognize Jerusalem as Israel’s capital and to relocate the US embassy in Israel to Jerusalem now will take place before the end of 2019, rather than at some undetermined date in the future.  As much as we would have welcomed that to occur immediately, we welcome that clarification of intention to move the embassy in the near future.

“Vice-President Pence has also reassured Israel, and indeed the American people and the world that, whatever else may occur, the U.S. will not permit the radical Iranian Islamist regime to obtain nuclear weapons capacity. He has made it clear that the Iran deal will either be strengthened and rendered effective, or immediately repudiated.

“It is also vital that the U.S. not allow the nuclear deal to prevent the U.S. from acting firmly to deal with Iranian-sponsored terrorism and aggression in the Middle East and around the world. It is welcome that Vice-President Pence has reaffirmed that the U.S. will hold Iran accountable for its actions in every sphere –– terrorism, ballistic missiles, human rights abuses, and terror proxies, as well as its nuclear program.

“Vice President Pence’s speech was one of the most pro-Israel speeches ever delivered by a foreign official. It was also one of the most clear-thinking anti-terror speeches ever delivered. The ZOA is so proud and appreciative of VP Pence.  We are grateful that President Trump and G-d Almighty placed VP Pence in this important position to do this holy work.  G-d bless Vice President Pence.”

We would love to hear from you! Please fill out this form and we will get in touch with you shortly.
Trending Z
News January 22, 2018
ZOA Condemns U.S. State Dept. & U.S. Amb. Nides For Siding with Antisemitic, Discriminatory Palestinian & Hamas Terrorists re: the Temple Mount, Violating Jews’ Religious Freedom
News January 22, 2018
ZOA’s Klein JPost Op-Ed: There is Nothing Extreme About Israel’s New Government
Uncategorized January 22, 2018
FLASH: ISRAEL-JORDAN PEACE TREATY (1994) GUARANTEES JEWS ACCESS TO THE TEMPLE MOUNT – LET MY PEOPLE PRAY
Uncategorized January 22, 2018
ZOA Analysis: Most American Rabbis Who Are Boycotting Some Israeli Ministers Are From Extremist Left Wing Groups (J Street; T’ruah; JVP)
Center for Law & Justice
We work to educate the American public and Congress about legal issues in order to advance the interests of Israel and the Jewish people.
We assist American victims of terrorism in vindicating their rights under the law, and seek to hold terrorists and sponsors of terrorism accountable for their actions.
We fight anti-Semitism and anti-Israel bias in the media and on college campuses.
We strive to enforce existing law and also to create new law in order to safeguard the rights of the Jewish people in the United States and Israel.
Our Mission
ZOA STATEMENT
The ZOA speaks out for Israel – in reports, newsletters, and other publications. In speeches in synagogues, churches, and community events, in high schools and colleges from coast to coast. In e-mail action alerts. In op-eds and letters to the editor. In radio and television appearances by ZOA leaders. Always on the front lines of pro-Israel activism, ZOA has made its mark.
Related Articles
OP-ED BY: ZOA Staff New Poll: Americans By 2-To-1 Margin Blame Palestinians For Talks’ Failure