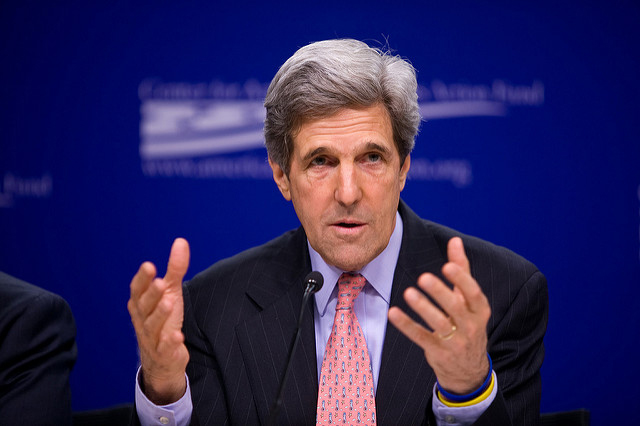 The Zionist Organization of America calls upon the U.S. Department of Justice and Congress to investigate former Secretary of State John Kerry for potential Logan Act violations, treason and inciting violence, if the reports are true regarding Kerry’s recent meeting with Palestinian Authority (PA) terrorist dictator Mahmoud Abbas’s close confidante, Hussein Agha, in London.  During this meeting, Kerry reportedly asked Agha to convey a message to dictator Abbas that Abbas should “play for time,” “stay strong,“ “not break,” should “not yield to President Trump’s demands,” and should attack President Trump personally.  Maariv and the Jerusalem Post reported that Kerry “asked Abbas, through Agha, not to attack the US or the Trump administration, but to concentrate on personal attacks on Trump himself, whom Kerry says is solely and directly responsible for the situation.”  (“Kerry To Abbas Confidante: ‘Stay Strong And Do Not Give In To Trump’,” by Ben Caspit/Maariv, Jerusalem Post, Jan. 24, 2018.)

Kerry reportedly also spoke of Trump in derogatory terms, asserted that there was a good chance that Pres. Trump would not be in office in a year, and offered to use any and all of his international contacts to help terrorist dictator Abbas present his own “peace plan.”  Agha reportedly conveyed Kerry’s message back to PA officials.  (See Id., and “REPORT: Kerry To Palestinians: ‘Hold On … Play For Time … Do Not Yield To Trump’s Demands’: Reportedly Insulted Trump During Meeting,” by Hank Berrien, Daily Wire, Jan. 24, 2018; and

If the reports are determined to be true, Kerry’s actions constituted an outrageous interference with the foreign policy of the current administration.  ZOA calls upon Kerry to stop any such disruptive and potential unlawful activities immediately.

Kerry has no right to underhandedly work with the dictator Abbas’ terrorist regime to impose his hostile, dangerous policies.

If the reports are accurate, it is also appalling that Kerry advised terrorist dictator Abbas to attack President Trump personally.

Notably, the reports about Kerry’s meeting surfaced just 10 days after Mahmoud Abbas’ inflammatory, obscene January 14, 2018 speech filled with antisemitic lies cursing President Trump, saying “May your house be destroyed.”  This Arabic curse is a call for the destruction of the President’s entire family. (See “Exclusive – Mort Klein: Palestinian Leader Mahmoud Abbas Unmasked as U.S. and Israel-Hating Anti-Peace Terrorist,” by Morton A. Klein, Breitbart, Jan. 2, 2018; and “The Speech in Which Abbas Dug His Own Grave, While Wishing the POTUS’ ‘House be Destroyed’,” by Mordechai Kedar, Israel Nat’l News, Jan. 15, 2018.)

The exact date of Kerry’s meeting does not appear in the reports we’ve seen.  What role did Kerry play here in encouraging Abbas’ dangerous ravings?  Did Kerry advise Abbas to personally attack Trump before Abbas’s speech seeking the personal destruction of President Trump and his family?  Is Kerry in part to blame for Abbas’ speech?  Alternatively, if Kerry’s advice came after Abbas’s speech, is Kerry encouraging even more virulent attacks on the U.S. President and urging a foreign dictator to ignore US policy.

We are living in an era of increasing violence.  We have repeatedly witnessed dictator Mahmoud Abbas’s and other radical Islamists’ verbal attacks lead to physical violence and terrorism.  Mahmoud Abbas’ 2015 speech praising and encouraging Palestinian Arabs to spill blood for Jerusalem led to the ongoing wave of terror, in which Palestinian Arab terrorists have as of now murdered 61 and wounded 881 innocent Jews and Americans.

Kerry’s reported advice to Abbas to reject Trump’s “demands,” if true, is also alarming.  What demands was Kerry referring to?

Trump’s demands on Abbas have only been the most basic, essential, humane and reasonable demands imaginable.

Did Kerry mean that Abbas should reject President Trump’s humane demand to stop the PA’s heinous $355 million per year of “pay to slay” payments that incentivize Palestinian Arab terrorists to murder innocent Jews and Americans?

Did Kerry mean that Abbas should reject President Trump’s demands to stop inciting terror attacks, stop honoring terrorists, and to stop using PA schools, media, and government-controlled mosques to indoctrinate Palestinian Arab children that they should aspire to become “martyrs” who stab, shoot or ram vehicles into Jews?

Did Kerry mean that Abbas should reject President Trump’s reasonable requests to come to the negotiating table?  (Of course, if the PA was really serious about achieving peace, Abbas would engage direct negotiations with Israel without any prompting.)

Is Kerry thus advising the PA to continue rejecting the sole real route to a peace agreement – direct negotiations with Israel?

What exactly is Kerry saying when Kerry tells Abbas not to yield to President Trump’s demands?

Is Kerry telling Abbas to reject all efforts by the Trump administration to facilitate a peace deal (even before the administration finalizes a proposal)?

Is Kerry telling terrorist dictator Abbas to continue trying to sabotage President Trump’s and the United States’ sovereign right, repeatedly endorsed by Congress, to recognize Israel’s ancient and modern capital Jerusalem and place our embassy there?  And to use U.S. recognition to incite still more violence?

Regardless of exactly what “demands” Kerry was referring to when Kerry reportedly told Abbas not to yield to President Trump’s “demands,” Kerry’s advice to Abbas (if true) constitutes abhorrent interference with our elected government, is detrimental to our country and peace prospects, and could cost innocent human lives.

During Kerry’s term in office, Kerry repeatedly displayed his hostility towards Israel, and pursued dangerous policies that endangered Israel and America.  He negotiated the disastrous Iran deal; threatened Israel with isolation; and followed up the anti-Israel UN resolution engineered by the Obama administration with one of the most anti-Israel speeches ever given by a U.S. administration official.  (See “ZOA: Kerry’s Speech Ignored the Facts and Endangers Israel’s Safety and Security,” Dec. 28, 2016.)

We would love to hear from you! Please fill out this form and we will get in touch with you shortly.
Trending Z
Uncategorized January 25, 2018
FLASH: ISRAEL-JORDAN PEACE TREATY (1994) GUARANTEES JEWS ACCESS TO THE TEMPLE MOUNT – LET MY PEOPLE PRAY
Uncategorized January 25, 2018
ZOA Analysis: Most American Rabbis Who Are Boycotting Some Israeli Ministers Are From Extremist Left Wing Groups (J Street; T’ruah; JVP)
Uncategorized January 25, 2018
Israel’s “Right of Return” Grandparent Clause is De-Judaizing the Jewish State – Eliminate It
Uncategorized January 25, 2018
Exclusive: ZOA Accuses Ilhan Omar of Hating the U.S. ‘as Much as Israel,’ Lauds Kevin McCarthy for ‘Throwing Her Off the HFAC’
Center for Law & Justice
We work to educate the American public and Congress about legal issues in order to advance the interests of Israel and the Jewish people.
We assist American victims of terrorism in vindicating their rights under the law, and seek to hold terrorists and sponsors of terrorism accountable for their actions.
We fight anti-Semitism and anti-Israel bias in the media and on college campuses.
We strive to enforce existing law and also to create new law in order to safeguard the rights of the Jewish people in the United States and Israel.
Our Mission
ZOA STATEMENT
The ZOA speaks out for Israel – in reports, newsletters, and other publications. In speeches in synagogues, churches, and community events, in high schools and colleges from coast to coast. In e-mail action alerts. In op-eds and letters to the editor. In radio and television appearances by ZOA leaders. Always on the front lines of pro-Israel activism, ZOA has made its mark.
Related Articles
OP-ED BY: ZOA Staff New Poll: Americans By 2-To-1 Margin Blame Palestinians For Talks’ Failure