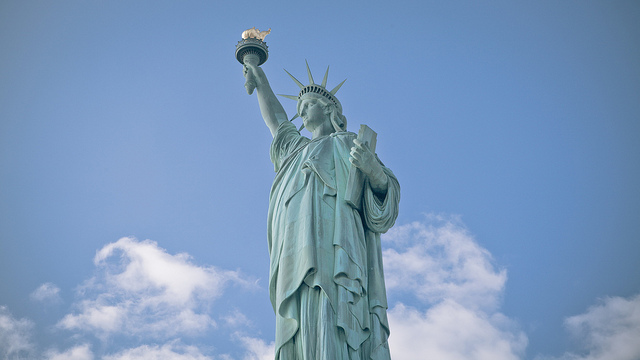 The Anti-Defamation League (ADL) just released a new, misleading report entitled “A Homegrown Threat: Islamist Extremist Plots In The United States” which downplays and underestimates terror attacks and threats from Islamist terrorist migrants to the United States.  For example, the ADL’s report refused to “count” the deadly attack by Islamist terrorist and Egyptian immigrant Hesham Mohamed Hadayet at the Los Angeles airport’s El Al ticket counter, during which Hadayet murdered 2 innocent Jews (a young woman ticket agent and an expectant father) and wounded 5 other innocent passengers and bystanders – and would have murdered more if a quick-acting El Al security agent had not stopped Hadeyet.  ADL used the outrageous excuse that Hadayet “was not included in our [ADL’s] data because he was likely politically motivated and did not express an explicit Islamist extremist ideology.” (ADL report appendix, page 19.)

It is wrong and dangerous for ADL to categorize attacking Jewish/Israeli-targets in the United States as something different from Islamist terrorism aimed at others.  And it is especially wrong that ADL uses the “political motivation” excuse.  ADL’s excuse aids Israel-haters and terrorists who falsely distinguish and justify attacks on Israelis and Jews by calling them “political” – rather than “terrorism.”

Moreover, the established legal and general definition of terrorism includes attacks that are “politically motivated.”  The U.S. Code of Federal Regulations (CFR) defines “terrorism” to include “the unlawful use of force and violence against persons or property to intimidate or coerce a government, the civilian population, or any segment thereof, in furtherance of political or social objectives.”  (28 CFR 0.85(l).)

ADL’s categorizations aid Israel-haters and terrorists who falsely distinguish and justify attacks on Israelis and Jews by calling them “political” – rather than “terrorism,” when the established legal and general definition of terrorism includes attacks that are “politically motivated.”

ADL’s other excuse for “not counting” Hadayet, that Hadayet “did not express an explicit Islamist extremist ideology,” is also absurd.   Hadayet was a member of Islamic terrorist group Gama’a al-Islamiyya, which has been continually designated by the U.S. State Department as a foreign terrorist organization, ever since the State Department designations began in 1997.  (See Investigative Project on Terrorism (IPT) Report: Hesham Mohamed Hadayet.)  It is remarkable that ADL’s report considered being a member of a vicious designated Islamic foreign terrorist organization insufficient to be considered an Islamist terrorist.

ADL’s report “Homegrown Threat” headline is also distorted. In reality, the threat is largely not “home grown” as ADL claims.  ADL’s accompanying press release headline also stated: “U.S. Citizens Responsible for Vast Majority of Islamist Extremist Terror Plots in the U.S. Since 2002, Annual ADL Report Finds: A full 90 percent of the plots and attacks were carried out by U.S. citizens or individuals living in the country with lawful permanent or temporary status.”  However, many of the “U.S. citizens” and legal residents perpetrating terrorist attacks referenced in ADL’s headline and report were actually Islamist immigrants from the Middle East, who managed to obtain citizenship or residency here.  Reading ADL’s full report reveals that only 52% of the Islamist terrorists counted by ADL were U.S. born – not 90% as an initial perusal of ADL’s headlines might lead a hurried reader to believe.  Another way to look at it: ADL leads hurried readers to believe that only 10% of Muslim terrorists are foreign born immigrants, while even ADL’s skewed numbers admit to 48% immigrants.

ADL further dramatically skewed its statistics by ignoring and not counting some of the worst terrorist attacks and plots carried out on U.S. soil by Islamist immigrants – (1) including 9-11-01 via ADL’s decision to use a 2002 start date; (2)Egyptian immigrant Hesham Mohamed Hadayet’s lethal 2002 attack at the Los Angeles El Al counter (discussed above); (3)clear Islamist terror attacks by immigrants – which ADL excluded with the strange excuse that ADL will include those attacks in a later report; (5)the five Middle Eastern immigrants convicted in the Holy Land Foundation trial for funneling money to designated terrorist organization Hamas; and more.

ADL further limits and skews its “Islamist terrorism” statistics by requiring that such incidents be motivated by particular foreign terrorist ideologies, in order for ADL to include them in its analysis.  ADL’s report methodology (page 13) reveals that ADL “limited [ADL’s] analyses to plots motivated by foreign terror organizations like al-Qaeda or Islamic State, or by the Sala-jihadist ideology that many of these groups espouse.”  In other words, ADL didn’t count Islamist terrorism motivated by other types of Islamist groups, or “unaffiliated” Islamist hatred for Jews, Christians, and Americans, or terrorist attacks that some authority decided to classify as a “hate crime” instead of terrorism.

ADL leads hurried readers to believe that only 10% of Muslim terrorists are foreign born immigrants, while even ADL’s skewed numbers admit to 48% immigrants.

ADL thus admits that it excluded Naveed Afzal Haq’s 2006 attack at the Jewish Federation in Seattle, during which Haq shot at six women and killed one woman.  ADL’s report states: “Because authorities labeled the attack as a hate crime, and Haq’s actions were not linked to an international terror group, we excluded him from the data.”  (ADL Report Appendix, p. 20.)  Unlike the ADL, most observers would surely understand that an Islamist attacker shooting up and killing employees at a Jewish organization is terrorism.

Another interesting exclusion is ADL’s failure to count the June 2017 stabbing attack by Tunisian native Amor Ftouhi on an officer in an airport in Flint, Michigan, while yelling “Allahu Akbar” during the attack. (AP, Jan. 18, 2018)   ADL excluded the attack from its current analysis with the excuse that “At the time of the attack, Ftouhi expressed anger over the deaths of people in Syria, Iraq and Afghanistan, but law enforcement did not link his motivations to a particular foreign terror organization.”  (ADL Report Appendix, page 20)  Why does ADL consider yelling “Allahu Akbar” and supposed retribution-against-America motives insufficient to immediately categorize an Islamist terrorist attack as such?

ADL then stated that “in March 2018, federal prosecutors added a terrorism charge to Ftouhi’s case after he declared his support for al-Qaeda and its late leader, Osama bin-Laden. His case will be included in future analyses of 2017 plots and attacks.”  ADL similarly refused to include ISIS-inspired Mall of America jihadist, immigrant Mahad Abdiaziz Adbiraham in ADL’s current report.  (See“Jihadist Responsible for Mall of America Stabbing Spree Entered U.S. with Foreign Relatives,” by John Binder, Breitbart, Feb. 5, 2018.)

Was keeping Ftouhi’s and Adbiraham’s terrorist attacks out of this year’s report with such a unconvincing excuse, despite evidence than now meets even ADL’s restrictive inclusion standards, simply another method used by ADL to skew this year’s report?

ADL’s “analysis” is moreover the tip of the iceberg.  For instance, the ADL report omitted (and never mentioned or provided any excuse for omitting) the following:

ADL’s report also ignores the impact of other dangerous Islamist immigrants on those who commit or plot terrorist attacks in the U.S.  Although it’s outside ADL’s self-selected date range, it should not be forgotten that notorious Egyptian immigrant Sheikh Omar Abdel-Rahman, a/k/a the Blind Sheikh, called for jihad against the infidel, plotted attacks with a group of followers, and was convicted of seditious conspiracy regarding the 1993 World Trade Center bombing.  Recently, in 2017, Egyptian immigrant Imam Ammar Shahin called for the death of Jews in a California mosque, and Syrian immigrant Imam Abdullah Khadra called for the death of Jews in a Raleigh, North Carolina mosque.

Of course, it’s not a contest. All terror is heinous, and should be vigorously combatted.

An important and positive aspect of the ADL report is its discussion of Internet channels that incentivize and provide bomb-making manuals and suggested targets to terrorists.  ZOA agrees with ADL that this is an area that must be thoroughly addressed and counteracted.

However, addressing Internet assistance to terrorists does not warrant underestimating and downplaying the threat of Islamist terrorism posed by poorly-vetted or other immigrants into the United States.

We urge the ADL to reanalyze, revise, and reissue their Report on this important issue in order to eliminate the underestimating/downplaying of Islamist migrant terrorism.

We would love to hear from you! Please fill out this form and we will get in touch with you shortly.
Trending Z
News May 7, 2018
ZOA Condemns U.S. State Dept. & U.S. Amb. Nides For Siding with Antisemitic, Discriminatory Palestinian & Hamas Terrorists re: the Temple Mount, Violating Jews’ Religious Freedom
News May 7, 2018
ZOA’s Klein JPost Op-Ed: There is Nothing Extreme About Israel’s New Government
Uncategorized May 7, 2018
FLASH: ISRAEL-JORDAN PEACE TREATY (1994) GUARANTEES JEWS ACCESS TO THE TEMPLE MOUNT – LET MY PEOPLE PRAY
Uncategorized May 7, 2018
ZOA Analysis: Most American Rabbis Who Are Boycotting Some Israeli Ministers Are From Extremist Left Wing Groups (J Street; T’ruah; JVP)
Center for Law & Justice
We work to educate the American public and Congress about legal issues in order to advance the interests of Israel and the Jewish people.
We assist American victims of terrorism in vindicating their rights under the law, and seek to hold terrorists and sponsors of terrorism accountable for their actions.
We fight anti-Semitism and anti-Israel bias in the media and on college campuses.
We strive to enforce existing law and also to create new law in order to safeguard the rights of the Jewish people in the United States and Israel.
Our Mission
ZOA STATEMENT
The ZOA speaks out for Israel – in reports, newsletters, and other publications. In speeches in synagogues, churches, and community events, in high schools and colleges from coast to coast. In e-mail action alerts. In op-eds and letters to the editor. In radio and television appearances by ZOA leaders. Always on the front lines of pro-Israel activism, ZOA has made its mark.
Related Articles
OP-ED BY: ZOA Staff ZOA: Obama’s Visit to Baltimore Mosque That Has Terror Ties Was A Frightening Disgrace

M orton A. Klein, national president of the The Zionist Organization of America (ZOA), issued the following statement: Dr. Zuhdi Jasser, a prominent Muslim leader, stated:  “As an American Muslim I’m just insulted.  It’s disgraceful that this is the mosque-that Obama’s picked to be the first visit.  The Islamic Society of Baltimore, first of all if […]

The Zionist Organization of America (ZOA) has condemned a call issued to the international community by Palestinian Authority ‘foreign minister’ Riyad Maliki to ban Jews who live in Judea/Samaria from visiting their countries. This call is simply anti-Semitic, stigmatizes and singles out for ostracism and discrimination Israeli Jews, and only Israeli Jews, because they live […]