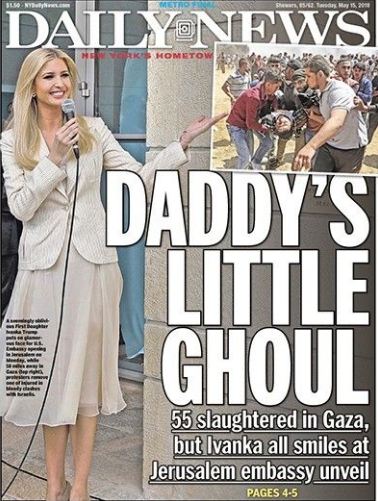 The Daily News cover (which can be viewed at:  “New York Daily News Slammed for Mocking ‘Deplorable’ Ivanka Trump as ‘Daddy’s Little Ghoul’,” by Brian Flood, Fox News, May 15, 2018) showed a picture of Ivanka Trump speaking at the U.S. Embassy opening, along with a caption of an allegedly wounded Gazan rioter (NOTE: many of these Gazan pictures are staged), together with utterly reprehensible, sexist, demeaning, distorted headlines, that blared:

“55 Slaughtered in Gaza, but Ivanka All Smiles at Jerusalem Embassy Unveil”

“A seemingly First Daughter Ivanka Trump puts on glamorous face for U.S. Embassy opening in Jerusalem on Monday, while 50 miles away in Gaza (top right), protesters remove one of injured in bloody clashes with Israelis.”

“If the 30,000 Palestinians were allowed to cross those borders, instead of dead terrorists, we would have had dead Israelis. Would the world be more satisfied?”

In addition, an accompanying Daily News article, misleading entitled “Dozens of Palestinians killed by Israeli forces at Gaza border, thousands injured in protests over U.S. embassy move to Jerusalem,” (by Christopher Brennan and Janon Fisher, New York Daily News, May 14, 2018) falsely called the U.S. Embassy opening “a major diplomatic fiasco . . . when Israeli forces killed more than 50 protesters and injured over 1,200 along the Gaza Strip during the festivities.”

Further, it is despicable and absurd for the Daily News to portray Ivanka Trump and all those who shared the joy of the seventy-years-overdue opening of the U.S. Embassy in Jerusalem, Israel as “oblivious” to the events in Gaza –  and to wrongly portray those events in a manner that maligns Israel for defending herself.

The Daily News’ shameful distorted headlines falsely call Hamas gunmen and bomb-planters mere “protesters” – and fail to even mention the multiple warnings Israel issued prior to engaging them.  Israel’s self-defense is highly restrained; the Israel Defense Forces attempts to avoid injuries and deaths of civilians placed by Hamas as human shields; and only shoots when there is no other option.  This is not a “slaughter.”  Every death in Gaza is solely the fault of Hamas.  As explained by former commander of British forces in Afghanistan Richard Kemp, who has recently spent time on the Gaza border observing Hamas-orchestrated violence:  “The true and malevolent purpose of Hamas’s plan is to incite violence in such a way that the IDF has no choice but to respond with lethal force, killing Gaza civilians.”  (“Expected Upsurge in Gaza Violence,” by Richard Kemp, Gatestone Institute, May 13, 2018.)

Everyone at the U.S. Embassy opening was very well aware of the Hamas gunmen and Hamas-allied mobs along Israel’s border with Gaza, who were ignoring Israel’s warnings, burning tires to hide their shooting attacks, planting bombs along Israel’s border, hurling and sending kites with Molotov cocktails to burn Israel’s fields, and doing everything possible to carry out their stated intention to destroy Israel and to murder and “eat the livers” of innocent Jews.  “Eat the livers!”  (See “The World Goes for Israel’s Throat,” by Giulio Meotti, Israel Nat’l News, Apr. 3, 2018; “Fanning the Flames of Fire in Israel,” by Stephen M. Flatow, Algemeiner, May 10, 2018.)

Jared Kushner also stated at the embassy opening ceremony that Hamas’ provocations at the border “today in Gaza are part of the problem and not part of the solution.”

As Italian journalist Giulio Meotti noted: “If the 30,000 Palestinians were allowed to cross those borders, instead of dead terrorists, we would have had dead Israelis. Would the world be more satisfied?”

Would the Daily News be more satisfied if the Hamas mobs had succeeded?

Where is the New York Daily News’ condemnation of the Hamas and Hamas-related attacks at Israel’s border?

Unfortunately, throughout history, enemies have attempted to annihilate the Jewish people.  Dor v’Dor – in every generation.

Is the Daily News saying that there should have been no ceremony, or that Ivanka must wear a black shroud?  Should all the theatres and entertainment venues in Israel have been closed. Nonsense. We must show the Hamas Arab terrorists that they will not affect life as usual in Israel. Would the Daily News have Ivanka Trump – and the rest of the Jewish people and all of our friends – refrain forever from cracking a smile at joyous occasions such as the embassy opening – in order to honor enemies who deliberately chose our happiest moments to engage in their murderous violence?

Shame on the New York Daily News. And we urge all to write to the NY Daily News and bitterly complain.

We would love to hear from you! Please fill out this form and we will get in touch with you shortly.
Trending Z
News May 16, 2018
ZOA Condemns U.S. State Dept. & U.S. Amb. Nides For Siding with Antisemitic, Discriminatory Palestinian & Hamas Terrorists re: the Temple Mount, Violating Jews’ Religious Freedom
News May 16, 2018
ZOA’s Klein JPost Op-Ed: There is Nothing Extreme About Israel’s New Government
Uncategorized May 16, 2018
FLASH: ISRAEL-JORDAN PEACE TREATY (1994) GUARANTEES JEWS ACCESS TO THE TEMPLE MOUNT – LET MY PEOPLE PRAY
Uncategorized May 16, 2018
ZOA Analysis: Most American Rabbis Who Are Boycotting Some Israeli Ministers Are From Extremist Left Wing Groups (J Street; T’ruah; JVP)
Center for Law & Justice
We work to educate the American public and Congress about legal issues in order to advance the interests of Israel and the Jewish people.
We assist American victims of terrorism in vindicating their rights under the law, and seek to hold terrorists and sponsors of terrorism accountable for their actions.
We fight anti-Semitism and anti-Israel bias in the media and on college campuses.
We strive to enforce existing law and also to create new law in order to safeguard the rights of the Jewish people in the United States and Israel.
Our Mission
ZOA STATEMENT
The ZOA speaks out for Israel – in reports, newsletters, and other publications. In speeches in synagogues, churches, and community events, in high schools and colleges from coast to coast. In e-mail action alerts. In op-eds and letters to the editor. In radio and television appearances by ZOA leaders. Always on the front lines of pro-Israel activism, ZOA has made its mark.
Related Articles
OP-ED BY: ZOA Staff New Poll: Americans By 2-To-1 Margin Blame Palestinians For Talks’ Failure