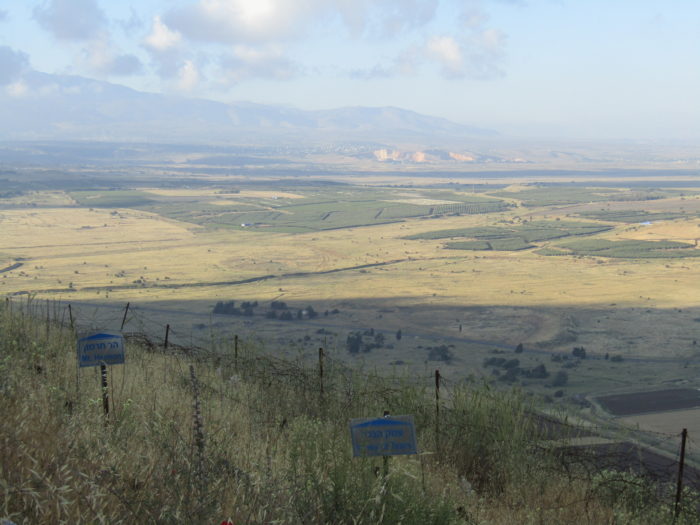 The Zionist Organization of America (ZOA) has strongly criticized and deplored the blocking in the House by the Republican leadership of a resolution, proposed by House Foreign Affairs Committee Member Congressman Ron DeSantis (R–FL) which would recognize Israeli sovereignty over the Golan Heights.

Last week, House Foreign Affairs Committee Member Congressman Ron DeSantis (R–FL) introduced the proposal in the House of Representatives which would recognize Israeli sovereignty over the Golan Heights. However, as a result of this internal effort opposing  the resolution, the resolution was not put to a vote.

Cong. Ron DeSantis (R-FL): “How could we even contemplate supporting anything other than the application of Israeli sovereignty to such a strategically significant area, especially given the plethora of malevolent forces that undermine security in the region?”

Congressman DeSantis has strongly criticized the blocking of a vote, saying, “I don’t know why my Golan Heights amendment was not made in order and thus denied a vote …. It was a germane amendment that would have provided the House with a chance to add clarity to the broader US policy vis-a-vis Syria. How could we even contemplate supporting anything other than the application of Israeli sovereignty to such a strategically significant area, especially given the plethora of malevolent forces that undermine security in the region?”

The Golan Heights were captured by Israel in the 1967 Six Day War after attacks launched upon Israel from the Heights and have been administered by Israel for the past 51 years. In 1981, Israel applied its jurisdiction (a step short of annexation) over the territory. The Heights are considered by most Israelis to be essential to Israel’s security, as it possess commanding topography overlooking virtually all of the Galilee and northern Israel with its dense population.

ZOA National President Morton A. Klein said, “The ZOA was strongly supportive of the DeSantis resolution, which we regarded as a vitally important development in achieving recognition of the Height’s strategic and security importance to Israel.

“People will remember that Israel suffered a surprise attack in the 1973 Yom Kippur War. As a result, Syrian forces swept through most of the Israeli defenses in the Golan and were poised to plunge into the Galilee before they were halted by the IDF. What would have happened had Israel not possessed this buffer zone in 1973? And we must never forget that while Syria controlled the Golan, Syria regularly shot at Jewish communities and innocent Jews from the Golan Heights to Israelis living below the Heights. The Golan is a strategically militarily critical area for Israel to retain. Even when “peace talks” were occurring, Israelis were regularly promoting “peace with the Golan”. And PM Rabin made speech after speech proclaiming that Israel dare not give up and come off of the Golan Heights.”

“People will also remember that, during the 1990s, successive Israeli governments sought to return the Golan Heights to Syria for a piece of paper signed by Hafez Al Assad, the then-Syrian dictator. Imagine now what the situation would have been for Israel had this occurred.

“The world would have applauded the signing of a supposedly durable peace treaty, but the fact is that, today, ISIS, Al Nusra, Al-Qaeda, the Iranian Revolutionary Guards Corps and sundry other armed, dangerous enemies of Israel devoted to Israel’s destruction would be positioned in force, not just beyond the Golan Heights, which would be bad enough, but peering straight down into the Galilee and the whole of northern Israel. More than likely, a major war would by now have broken out.

“The Golan Heights were always vitally important to Israel’s security, but have lately assumed even more strategic and security importance to Israel since Iran introduced its own forces into Syria. The Iranian forces fight not only on behalf of the murderous, chemical weapon-using Assad regime, but also heavily arm other jihadist groups opposed to Israel’s existence. Iran has already launched a drone weapon from Syria into Israel.

“It is for this reason that Congressman De Santis’s proposal assumes such long-term importance.

“The ZOA strongly supports his proposal and calls upon all other pro-Israel groups to campaign strongly for Congressional and presidential support for Israeli retention of and sovereignty over the Golan Heights.

“The ZOA also calls upon President Trump, who has not as yet expressed a view on the matter, to support the DeSantis Golan resolution. By doing so, he will be contributing in the long-term to creating the conditions out of which a genuine peace may one day emerge.”

We would love to hear from you! Please fill out this form and we will get in touch with you shortly.
Trending Z
News May 25, 2018
ZOA Condemns U.S. State Dept. & U.S. Amb. Nides For Siding with Antisemitic, Discriminatory Palestinian & Hamas Terrorists re: the Temple Mount, Violating Jews’ Religious Freedom
Uncategorized May 25, 2018
FLASH: ISRAEL-JORDAN PEACE TREATY (1994) GUARANTEES JEWS ACCESS TO THE TEMPLE MOUNT – LET MY PEOPLE PRAY
Uncategorized May 25, 2018
ZOA Analysis: Most American Rabbis Who Are Boycotting Some Israeli Ministers Are From Extremist Left Wing Groups (J Street; T’ruah; JVP)
Uncategorized May 25, 2018
Israel’s “Right of Return” Grandparent Clause is De-Judaizing the Jewish State – Eliminate It
Center for Law & Justice
We work to educate the American public and Congress about legal issues in order to advance the interests of Israel and the Jewish people.
We assist American victims of terrorism in vindicating their rights under the law, and seek to hold terrorists and sponsors of terrorism accountable for their actions.
We fight anti-Semitism and anti-Israel bias in the media and on college campuses.
We strive to enforce existing law and also to create new law in order to safeguard the rights of the Jewish people in the United States and Israel.
Our Mission
ZOA STATEMENT
The ZOA speaks out for Israel – in reports, newsletters, and other publications. In speeches in synagogues, churches, and community events, in high schools and colleges from coast to coast. In e-mail action alerts. In op-eds and letters to the editor. In radio and television appearances by ZOA leaders. Always on the front lines of pro-Israel activism, ZOA has made its mark.
Related Articles
OP-ED BY: ZOA Staff New Poll: Americans By 2-To-1 Margin Blame Palestinians For Talks’ Failure