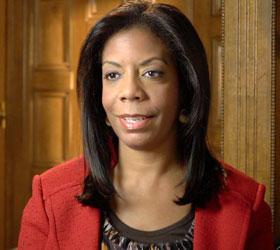 ZOA praises the choice of Dr. Kiron Skinner as Director of the Policy Planning Staff for Secretary of State Mike Pompeo. As a leading foreign policy intellectual, she is the founding director for the Institute for Politics and Strategy at Carnegie Mellon University.  She has co-authored two books about Ronald Reagan, and served on the U.S. Defense Department’s Defense Policy Board, among other appointments.  After President’ Trump’s election, Dr. Skinner served as an advisor on the President’s transition for State Department and National Security Council affairs.  She received both her masters and doctorate degrees in international relations from Harvard University.

Dr. Skinner has been a tireless advocate of America’s alliance with Israel as the cornerstone of regional stability in the Middle East.

As a longtime observer and analyst of U.S. foreign policy, Dr. Skinner has been a tireless advocate of America’s alliance with Israel as the cornerstone of regional stability in the Middle East.  She is deeply committed to President’s Trump’s vision of an America that stands by those states upon which it can rely, rather than seeking to appease its enemies and false friends.  We are excited to see the appointment of senior officials like Dr. Skinner who believe in this policy, and will implement it, rather than pay homage to the failed national security shibboleths of the past.

We would love to hear from you! Please fill out this form and we will get in touch with you shortly.
Trending Z
News September 5, 2018
ZOA Condemns U.S. State Dept. & U.S. Amb. Nides For Siding with Antisemitic, Discriminatory Palestinian & Hamas Terrorists re: the Temple Mount, Violating Jews’ Religious Freedom
News September 5, 2018
ZOA’s Klein JPost Op-Ed: There is Nothing Extreme About Israel’s New Government
Uncategorized September 5, 2018
FLASH: ISRAEL-JORDAN PEACE TREATY (1994) GUARANTEES JEWS ACCESS TO THE TEMPLE MOUNT – LET MY PEOPLE PRAY
Uncategorized September 5, 2018
ZOA Analysis: Most American Rabbis Who Are Boycotting Some Israeli Ministers Are From Extremist Left Wing Groups (J Street; T’ruah; JVP)
Center for Law & Justice
We work to educate the American public and Congress about legal issues in order to advance the interests of Israel and the Jewish people.
We assist American victims of terrorism in vindicating their rights under the law, and seek to hold terrorists and sponsors of terrorism accountable for their actions.
We fight anti-Semitism and anti-Israel bias in the media and on college campuses.
We strive to enforce existing law and also to create new law in order to safeguard the rights of the Jewish people in the United States and Israel.
Our Mission
ZOA STATEMENT
The ZOA speaks out for Israel – in reports, newsletters, and other publications. In speeches in synagogues, churches, and community events, in high schools and colleges from coast to coast. In e-mail action alerts. In op-eds and letters to the editor. In radio and television appearances by ZOA leaders. Always on the front lines of pro-Israel activism, ZOA has made its mark.
Related Articles
OP-ED ZOA Mourns the Passing of Mayor Ed Koch

Zionist Organization of America (ZOA) President Morton A. Klein released the following statement: It’s painfully shocking that Anti-Defamation League (ADL) head Jonathan Greenblatt recently wrote on ADL’s website: “it is a horrific tragedy that so many people have been killed and wounded at the Gaza border.” (“ADL Statement on Violence at Israel-Gaza Border,” May 15, […]