The Zionist Organization of America (ZOA) held its annual gala dinner at the Marriott Marquis Hotel in Times Square on Sunday November 4, 2018 with cocktails beginning at 4:30 PM. The sold out dinner gathered more than 1,000 people for what proved to be one of the most epic events in support of President Trump. The tickets for adults were $750 a piece and for those under 35-$180 and under age 26- $36-hence the large number of loud college students filling the ballroom. The Secret Service were stationed everywhere protecting Ambassador John Bolton, Ambassador Richard Grenell and a host of luminaries including Ambassador Danny Danon, Sean Spicer, Alan Dershowitz, Suzanne Somers, Rita Cosby and Ingeborg and Ira Rennert. 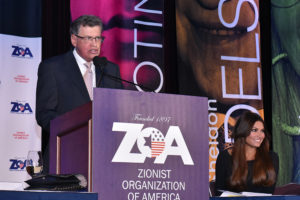 The cocktail hour contained a who’s who of prominent Jewish figures who were there to support the state of Israel and the ZOA which is headed by pro-Israel activist Mort Klein. The ZOA was founded in 1897 as a Zionist organization and under the leadership of Mort Klein for the past 25 years it has been one of the most influential Jewish organizations in the country. Emcee Kimberly Guilfoyle, the other half of Donald Trump Jr., started the evening off by thanking everyone for attending this momentous event. Guilfoyle who has been on the campaign trail with Don Jr. for the past couple of weeks excitedly told me she was heading to five different states tomorrow to stump for the Republicans. 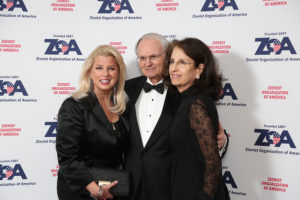 Another Republican supporter, Ingeborg Rennert, presented the Sheldon and Miriam Adelson award to National Security Advisor, John Bolton, who received a standing ovation from the ebullient crowd. Bolton is a frequent attendee of this dinner and tonight he delivered a rousing speech saying he was representing a president who no longer apologized for defending our sovereignty and “who was calling out our enemies and standing by our friends”. He said that the days of selling out allies or tiptoeing in the name of political correctness were over and America was finally being respected again. The historic embassy move to Jerusalem was a move that was long overdue, said Bolton, as the US stands for what is “right and just.” Withdrawing from the anti-Israel U.N. Human Rights Council, which devoted most of its time to criticizing Israel, was a necessary move because Bolton said, they were unworthy of American membership in 2006 and haven’t gotten any better with age. He went on to enumerate some of the president’s historic moves such as cutting funding and closing the Washington office of the PLO until they stop paying people who kill Jews, and withdrawing from the Iran nuclear deal declaring, “on our watch they will never get nuclear weapons.” 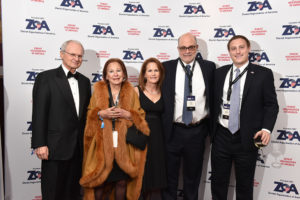 He said the current sanctions that would go into effect at midnight were designed to put maximum pressure on Iran whose currency had already lost 70 percent of its value and whose economy was sliding into recession. Moreover, Bolton stated their oil exports had fallen by over one million barrels a day and unless Iran changed their behavior they would face economic disaster.

This incredibly diverse crowd which contained Jews and non-Jews, Conservatives and Democrats, actors and politicians, scholars and businessmen then welcomed Alan Dershowitz who was paradigmatic of this varied crowd and came to introduce President Mort Klein. Dershowitz called Klein one of the most important Zionist leaders in modern history and recalled Klein being born in a “displaced persons camp” in Germany the son of Holocaust survivors. 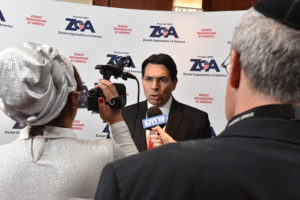 Israel’s Ambassador to the United Nations, Danny Danon, being interviewed by the media team of Arutz Sheva

While he admitted that he and Klein do not agree on everything, at which point the crowd booed, Dershowitz said they were both ardent Zionists and he was committed to ensuring the Democrats were not taken over by the hard left. Dershowitz said that despite disagreements, he and Mort often engaged in civil discourse and even traveled to Qatar together to convince them to be more pro-Israel. Dershowitz made the extraordinary remark that every time he speaks with Klein he learns something new and that Mort was even able to change his mind on occasion. Klein thanked Dershowitz for his praise and said he was only at the ZOA for 25 years because he couldn’t find another job. 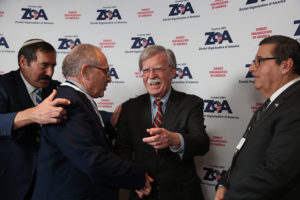 On a more serious note, Klein enumerated some of the ZOA’s major achievements which included: convincing the US to move the embassy to Jerusalem, opposing the Oslo accords, sponsoring legislation opposing the Iran nuclear deal, stopping the worldwide broadcast of the anti-Semitic Klinghoffer Opera, training students on how to advocate for Israel, opposing the BDS movement, and changing Title 6 to include protection for Jewish students. He praised Donald Trump for condemning the recent anti-Semitic killings in Pittsburgh remarking that we have never had a president who has stated in such unequivocal terms that “we will seek the destruction of those who seek the destruction of the Jews.” Klein said he was pained by the incomprehensible allegations that Trump was responsible for the attacks when the killer had said he hated Trump because of all the “kikes” around him. 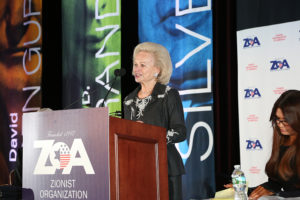 Klein said Jews had been targeted under Obama in a 2014 Community Center shooting and yet no one blamed Obama. He praised Trump as the greatest friend of Israel ever as the crowd stood and cheered continuously. Klein said we must condemn Louis Farrakhan and Linda Sarsour and urged CNN to get rid of Israel-hater Geraldo Rivera. He concluded on a positive note, remarking that the Jewish people have more Noble Laureates per capita than anyone else, more musicians and mathematicians per capita than any other group and that there are currently more students studying in yeshiva in Israel than at any other time in history with over 500,000 Jews residing in Jerusalem.

For the first time ever, Mort was presented with the Theodor Herzl award celebrating his 25 years of leadership. Mort then announced that he had just been notified that David Golden was donating $1 million to ZOA in honor of Mort’s unapologetic defense of Israel. 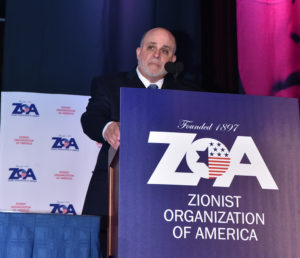 After all this excitement, Guilfoyle introduced Suzanne Somers whom she said was working on her 27th book and thanked her for the ThighMaster. Somers who is 72 looked spectacularly young as she introduced German ambassador Dick Grenell whom she said she tried to pick up years ago after seeing him on Fox news. Somers said she has been married to a Jew, Alan Hamel, for the past 50 years but acknowledged her Irish background joking that she had written three books on alcoholism. Grenell thanked Somers and Mort and noted that anti-Semitism has been increasing in Germany with more than 1,453 incidents reported.

He called anti-Semitism a mental disease and said the current administration was the most pro-Israel in history recounting the president ordering the last known Nazi collaborator in the US, Jakiv Palij, to be deported back to Germany. 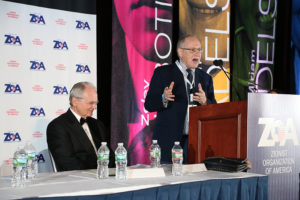 At about 9:30 PM the crowd became restless as they were anxiously anticipating one of the highlights of the evening radio host Mark Levin who Guilfoyle introduced by his moniker “The Great One.” Levin extolled Trump for being the greatest president for Israel and went on to list his accomplishments including: hiring Nikki Haley, Mike Pompeo and David Friedman; withdrawing from UNESCO and the U.N. Human Rights Council; moving the embassy to Jerusalem; and backing out of the Iran nuclear deal.

Levin said he was in New Jersey with the president when he signed legislation to reimpose sanctions on Iran and even received the pen Trump used-which he remarked was not for sale. In the harshest tones of the evening, Levin decried the press in general and CNN, MSNBC and the New York Times in particular who he said censored the news in order to fit a liberal point of view. He recalled that the New York Times failed to cover the Holocaust putting it on only seven covers and in the back pages of its papers for fear of offending Roosevelt and that a newspaper that shamelessly self censors in this fashion did not deserve to be the paper of record. 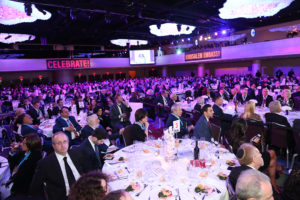 The sold out ZOA dinner gathered more than 1,000 people for what proved to be one of the most epic events in support of President Trump.

He called out the Anti-Defamation League for incorrectly stating that since 2016 anti-Semitism occurrences have been on the rise- a statistical fallacy. He called the organization “J Street”- “P Street” for Palestinians, and criticized the Jews for not standing with this unabashed pro-Israel President. The crowd roared in approval as he expressed his fury with the media and lauded the work of Mort Klein. At 10 PM attendees enthusiastically gathered at the dessert reception after experiencing more than 5 hours of delicacies; most of which were thankfully non-caloric.

This article was published by Jewish Voice and may be found here.

We would love to hear from you! Please fill out this form and we will get in touch with you shortly.
Trending Z
Uncategorized November 8, 2018
FLASH: ISRAEL-JORDAN PEACE TREATY (1994) GUARANTEES JEWS ACCESS TO THE TEMPLE MOUNT – LET MY PEOPLE PRAY
Uncategorized November 8, 2018
ZOA Analysis: Most American Rabbis Who Are Boycotting Some Israeli Ministers Are From Extremist Left Wing Groups (J Street; T’ruah; JVP)
Uncategorized November 8, 2018
Israel’s “Right of Return” Grandparent Clause is De-Judaizing the Jewish State – Eliminate It
Uncategorized November 8, 2018
Exclusive: ZOA Accuses Ilhan Omar of Hating the U.S. ‘as Much as Israel,’ Lauds Kevin McCarthy for ‘Throwing Her Off the HFAC’
Center for Law & Justice
We work to educate the American public and Congress about legal issues in order to advance the interests of Israel and the Jewish people.
We assist American victims of terrorism in vindicating their rights under the law, and seek to hold terrorists and sponsors of terrorism accountable for their actions.
We fight anti-Semitism and anti-Israel bias in the media and on college campuses.
We strive to enforce existing law and also to create new law in order to safeguard the rights of the Jewish people in the United States and Israel.
Our Mission
ZOA STATEMENT
The ZOA speaks out for Israel – in reports, newsletters, and other publications. In speeches in synagogues, churches, and community events, in high schools and colleges from coast to coast. In e-mail action alerts. In op-eds and letters to the editor. In radio and television appearances by ZOA leaders. Always on the front lines of pro-Israel activism, ZOA has made its mark.
Related Articles
OP-ED Watch: Summing Up Special Knesset Session with Huckabee

OP-ED BY: Sam Sokol ZOA’s Daube Reflects on the True Goal of BDS, The Destruction of Israel