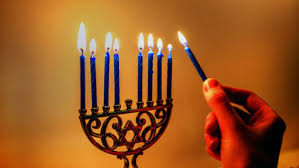 We thank all our friends for your efforts on behalf of the Jewish nation.  We hope that this Hanukkah will be both a time of joy for all of you, and a time that strengthens all of us to continue the important and holy work of defending the Jewish nation.

Hanukkah reminds us of the Jewish people’s dedication to our faith, and eternal right and connection to the land of Israel.  During 25 years of battles, 2200 years ago (166 B.C.E. – 139 B.C.E.), a tiny band of a few thousand Jewish Maccabees defended the land of Israel, beat back repeated onslaughts from the highly equipped, 50,000-man Syrian-Greek invading armies, and rededicated the Holy Temple in the old city Jerusalem (eastern Jerusalem).

In addition to Jerusalem’s Old City, most of the events that we commemorate today occurred in the Judean Hills and Modi’in.  In and around the town of Beit-El, in Judea/Samaria, the Maccabees built their army, and maintained observation posts (which one can still see today), overlooking Israel’s plains – where the Maccabees watched for Syrian-Greek movements and impending attacks.   A modern Israeli city of 90,000 Jews, Modi’in-Maccabim-Re’ut, is located in the same area as ancient Modi’in, halfway between Jerusalem and Tel Aviv.

Incredibly, the United Nations and European Union consider Beit El and parts of Modi’in to be “settlements” and “occupied territories,” and not part of Israel.   (See “Modi’in, 71724, Occupied Palestine,” by Judge Dan, Israellycool, Aug. 15, 2012.)

Hanukkah sends a clear message to all those who falsely call the Jewish people “illegal occupiers” of our own land.  The Jewish people were there, fighting and dying to maintain our faith and sovereignty and land, for thousands of years before Yasser Arafat invented the propaganda concept of a Palestinian-Arab people in 1964, and for thousands of years before the antisemitic cabal at the United Nations began holding repeated anti-Israel hate fests – such as the UN hate fest held just this past week.

As we light and bask in the glow of the Hanukkah candles, let the Maccabees’ memory and  the justness of our cause strengthen and inspire us.

We would love to hear from you! Please fill out this form and we will get in touch with you shortly.
Trending Z
Uncategorized December 3, 2018
ZOA Analysis: Most American Rabbis Who Are Boycotting Some Israeli Ministers Are From Extremist Left Wing Groups (J Street; T’ruah; JVP)
Uncategorized December 3, 2018
ZOA: Israel’s Reasonable Judicial Reform Proposals Are Good for Democracy, the Rule of Law and the Economy
Uncategorized December 3, 2018
Israel’s “Right of Return” Grandparent Clause is De-Judaizing the Jewish State – Eliminate It
News December 3, 2018
ZOA is Disappointed, Offended and Frightened by 211 U.S. House Votes Supporting Jew-Hating, Israel-Hating Rep. Ilhan Omar
Center for Law & Justice
We work to educate the American public and Congress about legal issues in order to advance the interests of Israel and the Jewish people.
We assist American victims of terrorism in vindicating their rights under the law, and seek to hold terrorists and sponsors of terrorism accountable for their actions.
We fight anti-Semitism and anti-Israel bias in the media and on college campuses.
We strive to enforce existing law and also to create new law in order to safeguard the rights of the Jewish people in the United States and Israel.
Our Mission
ZOA STATEMENT
The ZOA speaks out for Israel – in reports, newsletters, and other publications. In speeches in synagogues, churches, and community events, in high schools and colleges from coast to coast. In e-mail action alerts. In op-eds and letters to the editor. In radio and television appearances by ZOA leaders. Always on the front lines of pro-Israel activism, ZOA has made its mark.
Related Articles
OP-ED BY: ZOA Staff New Poll: Americans By 2-To-1 Margin Blame Palestinians For Talks’ Failure