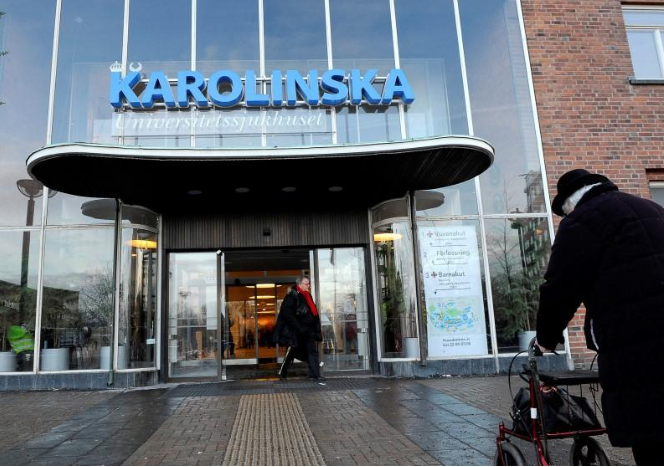 The Zionist Organization of America (ZOA) has noted a report regarding an alarming case in Sweden of entrenched anti-Semitism in a hospital which, among other things, drastically affected the careers of Jewish doctors working there.

In a story that broke in the Swedish newspaper Aftonbladet, a Jewish doctor who works at the Swedish hospital accused of covering up repeated alleged incidents of anti-Semitism by a department head says the abuse consisted of both verbal attacks and professional decisions that adversely affected his and colleagues’ careers over several years.

“Traditional anti-Semitism in Europe seems have been submerged after World War Two but never really went away and today, with anti-Zionism to provide an alibi, is resurfacing.” -Mort Klein

The former department head, a prominent surgeon at the prestigious Karolinska University Hospital in Stockholm (its Nobel Assembly selects the recipients of the Nobel Prize in Physiology or Medicine), allegedly bullied and harassed Jewish doctors and has been compelled to absent himself from his duties while the accusations are being investigated.

The senior Jewish doctor who has worked at Karolinska for almost 20 years (and who agreed to speak to the Israeli newspaper, Haaretz, on condition of anonymity) says that together with his Jewish colleagues, he was systematically discriminated against by the department head. The doctor says two of his Jewish colleagues left the department because of the abuse and that he is the only Jewish physician still working there. He says all three had to pay both a personal and professional price for the conduct of a person whom Jewish organizations say posted anti-Semitic materials online.

“Our work environment was extremely hostile …. The situation started over three years ago, and escalated over the ensuing years.” In one case, the doctor says the department head saw him talking with another Jewish colleague and remarked, “There goes the Jewish ghetto.” The doctor adds that “the harassment included a series of damaging steps to our careers,” such as being denied access to research funds and not being allowed to participate in medical conferences or courses.

The alleged discrimination also had a negative effect on their patients, the doctor charges. “In some instances, we were not even allowed to meet patients and perform surgical procedures, which were an important part of our jobs,” he says, citing cases in which the department head referred his patients to other doctors.

Another example centered on an international congress in which the Jewish doctor had been invited to deliver the keynote lecture. The department chairman allegedly denied his request to attend, without supplying a reason, but then provided funding for five non-Jewish doctors to travel instead – even though they had not received formal invitations. Karolinska University Hospital’s acting CEO, Annika Tibell, confirmed to Haaretz that the doctor had initially been refused permission to attend, but that decision was later overruled by senior management and a university representative, and the doctor was able to give his keynote speech.

In another case, the senior Jewish doctor was supposed to lead a multi-center study funded by the European Union, involving an Israeli hospital, at the Karolinska Institute. But the suggestion that he would serve as the project’s local principal investigator was rejected by the department head, with no official reason given.

To back up claims of anti-Semitic treatment, the doctor and other sources cite material the department chairman allegedly posted on his Facebook account, which included cartoons that were deemed anti-Semitic by no fewer than three anti-Semitism watchdog organizations (The Simon Wiesenthal Center; the Swedish Committee Against Anti-Semitism; and the Living History Forum, a Swedish public body that promotes human rights and educates on the Holocaust). One cartoon depicts a bloodthirsty Israeli soldier with a large, grotesque nose, while another compares Israel to Nazi Germany.

Initial complaints about the department head’s behavior were ignored. It was only when he complained with the help of a lawyer that the hospital agreed to launch a probe into the claims, he says. The probes were perfunctory, recorded no testimony and were held by the victims to be essentially cover-ups. Thus, when one Jewish doctor confirmed “that he had indeed experienced anti-Semitic comments” and “couldn’t rule out that there was a problem, this information was ‘forgotten.’ During the investigation, no protocols were written and eventually the conclusion was that there was no anti-Semitism problem.”

The current investigation into the allegations of anti-Semitism are being conducted by an external law firm not selected by the hospital. The former department chairman is still being paid as the investigation continues, and is still conducting research at the affiliated university. In addition, the professor who the Jewish doctor alleges tried to cover up events is on a similar time-out, pending the investigation findings. However, sources tell Haaretz he is still involved in the department’s work, both as consultant and professor.

Swedish doctors were prominent in the development of eugenics and race biology in the first half of the 20th century, and institutions – including Karolinska – actively rejected Jewish refugees fleeing Nazi Germany and seeking work in Sweden in the 1930s. Evidence of the country’s dark past can even be found in the hospital grounds, with one street named after Astrid Cleve – a Swedish researcher who remained a Nazi sympathizer until her death in 1968. The hospital recently asked the municipality for the name to be changed.

The hospital’s anti-Semitism scandal also comes at a time when Sweden is facing a new wave of anti-Semitism. In the September general election, a party with Nazi roots made substantial political gains. The last few years have also seen a string of anti-Semitic attacks in the country (David Stavrou, ‘“Anti-Semitism Cover-up” Rocks Sweden’s Most Prestigious Hospital,’ Haaretz, November 27, 2018).

ZOA National President Morton A. Klein said, “This disturbing report of what seems to be a case of what could be called casual anti-Semitism is indicative of the way anti-Semitic attitudes are increasingly finding a home in Europe.

“Much of this is driven by the anti-Semitic attitudes of Muslim immigrants to Europe, all of whom come from societies rife with endemic levels of anti-Semitism, as Pew polls have shown. Also, however, traditional anti-Semitism in Europe seems have been submerged after World War Two but never really went away and today, with anti-Zionism to provide an alibi, is resurfacing.

“We see this in this report, where a senior staff member of a prestigious Swedish hospital, apparently felt free for years to bully and discriminate against Jewish doctors who were subordinate to him. We also see it in the investigations mounted to consider the charges of anti-Semitic behavior, which seem to have been designed to discover no wrongdoing rather than reach for the truth of the matter.

“It also needs to be remembered that these outrages have occurred against the background of the bombing of a synagogue in Gothenburg; numerous attacks on the dwindling Malmö Jewish community, dwindling precisely because of anti-Semitic activity from Malmö’s much larger Muslim immigrant community; and the torching of the home of a Jewish politician in Lund last month.

Tragically, Europe seems to be a place that is becoming increasingly hostile and dangerous to Jews and Jewish life.”

We would love to hear from you! Please fill out this form and we will get in touch with you shortly.
Trending Z
Uncategorized December 12, 2018
FLASH: ISRAEL-JORDAN PEACE TREATY (1994) GUARANTEES JEWS ACCESS TO THE TEMPLE MOUNT – LET MY PEOPLE PRAY
Uncategorized December 12, 2018
ZOA Analysis: Most American Rabbis Who Are Boycotting Some Israeli Ministers Are From Extremist Left Wing Groups (J Street; T’ruah; JVP)
Uncategorized December 12, 2018
Israel’s “Right of Return” Grandparent Clause is De-Judaizing the Jewish State – Eliminate It
Uncategorized December 12, 2018
Exclusive: ZOA Accuses Ilhan Omar of Hating the U.S. ‘as Much as Israel,’ Lauds Kevin McCarthy for ‘Throwing Her Off the HFAC’
Center for Law & Justice
We work to educate the American public and Congress about legal issues in order to advance the interests of Israel and the Jewish people.
We assist American victims of terrorism in vindicating their rights under the law, and seek to hold terrorists and sponsors of terrorism accountable for their actions.
We fight anti-Semitism and anti-Israel bias in the media and on college campuses.
We strive to enforce existing law and also to create new law in order to safeguard the rights of the Jewish people in the United States and Israel.
Our Mission
ZOA STATEMENT
The ZOA speaks out for Israel – in reports, newsletters, and other publications. In speeches in synagogues, churches, and community events, in high schools and colleges from coast to coast. In e-mail action alerts. In op-eds and letters to the editor. In radio and television appearances by ZOA leaders. Always on the front lines of pro-Israel activism, ZOA has made its mark.
Related Articles
OP-ED BY: ZOA Staff ZOA: Iran Nuclear Deal Is A Catastrophe

The Zionist Organization of America (ZOA) is deeply horrified, but not surprised, by the truly terrible nuclear agreement that has been signed by the P5 +1 nations (the five permanent members of the United Nations Security Council, including the United States, plus Germany) and the radical Islamic Iranian regime. This agreement will provide nuclear weapons […]

The Zionist Organization of America (ZOA) has criticized conservative pundit Ann Coulter for offensively anti-Semitic tweets during last night’s Republican presidential candidates debate. In the course of the debate, Coulter grew antagonistic towards GOP candidates speaking of the need to strengthen ties with Israel and assist her in potentially defending herself against a nuclear armed […]