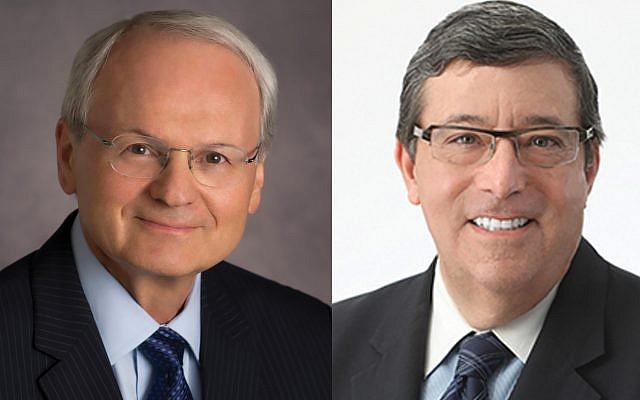 We are living in a time of increasingly unbridled antisemitism and Israel-hatred. Jewish lives are at risk. An onslaught of pro-BDS activity plagues our campuses and country. ZOA receives calls every week from Jewish students who have been physically and/or verbally attacked. Students for Justice in Palestine (SJP) rallies call for throwing Jews off their college campuses, and even for killing Jews. Members of Congress publicly support BDS, remove Israel from their office maps, call for ending all aid to Israel, and accuse Jews and Israel supporters of dual loyalty. We’ve seen a rise in the media’s hostility to Israel. Tragically, a Trump-hating antisemite murdered 11 Jews while they were praying in a Pittsburgh shul. Jews have been physically attacked from New York to Los Angeles. Things are even worse in Europe. And in Israel, Arab stabbings and car-rammings and murders of innocent Jews continue. Moreover, frighteningly, antisemitism is more and more becoming mainstreamed.

ZOA zealously advocates without name-calling, demeaning insults or improper tactics. Sadly and dangerously, some in the American Jewish establishment want ZOA to sit down and shut up, but if there ever was a time for American Jewish groups to stand up and speak up strongly, that time is now.

Despite all this, the Conference of Presidents of Major American Jewish Organizations (the CoP) has now “warned” the Zionist Organization of America (ZOA) to cease speaking out strongly and to stop strongly criticizing Jewish groups that promote actions and policies that ZOA views as dangerous to our Jewish brothers and sisters and our beloved State of Israel. With the serious issues facing Jews, is this what the CoP should be spending their time on?

The following pro-Israel ZOA actions led to the “warning” of the Conference of Presidents: ZOA spoke out against the Anti-Defamation League’s promotion and praise for anti-Israel groups such as Black Lives Matter and J Street. ZOA complained when the ADL legitimized virulent anti-Israel groups, including CAIR, ISNA, JVP and the Muslim Public Affairs Committee, which has called for Israel’s destruction, by co-signing multiple letters with them attacking pro-Israel friends. ZOA debunked ADL’s malicious letter to Congress and press releases condemning pro-Israel stalwarts, including Secretary of State Pompeo, Brigitte Gabriel, Frank Gaffney and the Canary Mission. ADL tried to derail Secretary Pompeo’s confirmation, and falsely accused these friends of the Jewish people of “Islamophobia,” racism and anti-Muslim bigotry. ZOA criticized HIAS and the National Council for Jewish Women (NCJW) for defending antisemite Linda Sarsour. ZOA opposed ADL’s, AJC’s and HIAS’s support for bringing into the US unvettable Syrian Muslims, who likely hate Jews and Israel. ZOA complained when the ADL fought against anti-BDS legislation.

Instead of criticizing and “warning” ZOA about our strong stances, the Conference of Presidents should be praising and joining ZOA in our critical fights to defend the Jewish people.

MYSTIFYINGLY, WHILE the CoP wrongly “warned” ZOA without an explanation, it dismissed with no explanation ZOA’s formal complaint to sanction the left-wing ADL for demeaning and insulting ZOA by falsely stating that ZOA doesn’t really fight antisemitism and isn’t a civil rights group. In fact, ZOA has combated antisemitism for 121 years; led the successful six-year battle to change Civil Rights Act regulations to finally protect Jewish students; filed numerous Title 6 complaints defending Jewish students who experience antisemitism on campuses around the country; and is the leading group protecting pro-Israel students’ civil rights. The CoP likewise dismissed our formal complaint that CoP leftwing member Ameinu absurdly and recklessly stated that ZOA’s Zionism is “violent, reactionary and anti-democratic” as well as dismissing ADL’s insulting ZOA by referring to us as a “once-venerable organization.” The decisions that were made here have had many asking whether there was a political not a rational and valid and logical basis for these actions by the CoP Committee.

Why is the CoP trying to muzzle, silence and restrict ZOA’s pro-Israel freedom of speech, when the CoP’s own rules permit members to “zealously advocate” and “criticize the policies and viewpoints of other member organizations and their leaders,” and state that such advocacy is “both healthy and critical to [CoP’S] mission?” ZOA zealously advocates without name-calling, demeaning insults or improper tactics. Sadly and dangerously, some in the American Jewish establishment want ZOA to sit down and shut up, but if there ever was a time for American Jewish groups to stand up and speak up strongly, that time is now.

Especially as a child of Holocaust survivors who lost most of his family to Hitler’s horrors, Mort Klein fully comprehends that we dare not again become the sha shtill Jews of silence of the 1930s and 1940s, when Jewish groups were frightened appeasers who not only said little, but also attacked those Jews who spoke out about the horrors Jews were experiencing.

ZOA refuses to be silent. ZOA will continue speaking the truth about the Arab/Islamist war against Israel and the West, and the dangerous rise in antisemitism and Israel bashing on US campuses and elsewhere. ZOA will vehemently challenge positions and policies that harm or endanger our people. ZOA will never be silent. ZOA will proudly and courageously and boldly defend the Jewish people and the Jewish State of Israel.

Morton A. Klein and Mark Levenson are president and chairman, respectively, of the Zionist Organization of America.

We would love to hear from you! Please fill out this form and we will get in touch with you shortly.
Trending Z
News January 17, 2019
At ZOA Gala Secy Pompeo Gave the Greatest, Most Pro-Israel Speech Ever Delivered by a Public Official
News January 17, 2019
Dershowitz in Arutz 7: NYC’s Temple Emanu-El Silences a Pro-Israel Voice & Promotes an Anti-Israel Voice
Uncategorized January 17, 2019
Jewish Press: Has Deborah Lipstadt Undercut Both Herself and Future Antisemitism Envoys?
CLJ January 17, 2019
ZOA Letter to Jason Wingard, President, Temple U, Concerning an Antisemitic Incident
Center for Law & Justice
We work to educate the American public and Congress about legal issues in order to advance the interests of Israel and the Jewish people.
We assist American victims of terrorism in vindicating their rights under the law, and seek to hold terrorists and sponsors of terrorism accountable for their actions.
We fight anti-Semitism and anti-Israel bias in the media and on college campuses.
We strive to enforce existing law and also to create new law in order to safeguard the rights of the Jewish people in the United States and Israel.
Our Mission
ZOA STATEMENT
The ZOA speaks out for Israel – in reports, newsletters, and other publications. In speeches in synagogues, churches, and community events, in high schools and colleges from coast to coast. In e-mail action alerts. In op-eds and letters to the editor. In radio and television appearances by ZOA leaders. Always on the front lines of pro-Israel activism, ZOA has made its mark.
Related Articles
OP-ED BY: ZOA Staff ZOA Criticizes ADL for Accepting Cong. Johnson’s Phony Apology for Calling Jews “Termites”

OP-ED BY: Caroline B. Glick, The Jerusalem Post Our World: Netanyahu, Congress, AIPAC and the PLO

It is not in the least surprising that the PLO-controlled Palestinian Authority did not condemn the terrorist attack on Sunday. It is not surprising because the PLO-controlled PA encouraged the attack. As Khaled Abu Toameh wrote for the Gatestone Institute, in the aftermath of last month’s US-enabled passage of UN Security Council Resolution 2334, which […]