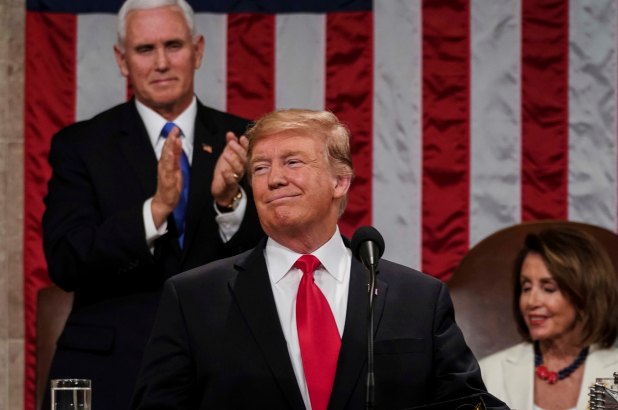 The Zionist Organization of America (ZOA) has strongly praised President Donald Trump for the bold, principled stand he has taken supporting Israel, confronting the challenge posed by an Iranian regime seeking nuclear weapons, and in opposing the shocking growth of anti-Semitism in his State of the Union address this week. The ZOA believes President Trump’s public words of support are both timely and necessary, given the extraordinary rise of Israel-hatred and Jew-hatred that is virtually everywhere across the globe.

In his State of the Union address, President Trump said: “One of the most complex set of challenges we face is in the Middle East. Our approach is based on principled realism –– not discredited theories that have failed for decades to yield progress. For this reason, my Administration recognized the true capital of Israel –– and proudly opened the American Embassy in Jerusalem … My Administration has acted decisively to confront the world’s leading state sponsor of terror: the radical regime in Iran. To ensure this corrupt dictatorship never acquires nuclear weapons, I withdrew the United States from the disastrous Iran nuclear deal. And last fall, we put in place the toughest sanctions ever imposed on a country … We will not avert our eyes from a regime that chants death to America and threatens genocide against the Jewish people. We must never ignore the vile poison of anti-Semitism, or those who spread its venomous creed. With one voice, we must confront this hatred anywhere and everywhere it occurs. Just months ago, 11 Jewish-Americans were viciously murdered in an anti-Semitic attack on the Tree of Life Synagogue in Pittsburgh” (‘State of the Union 2019,’ CNN, February 6, 2019).

President Trump also paid tribute to SWAT officer Timothy Mason, who was grievously wounded seven times in confronting the Pittsburgh perpetrator during his murderous rampage; 81-year old Judah Samet, a survivor of the Pittsburgh massacre as well as Hitler’s genocide over seventy years ago, whose ordeal came to an end when he and his family were liberated by American troops; Joshua Kaufman, another Holocaust survivor and an inmate of the ghastly Nazi concentration camp at Dachau, also liberated by American soldiers; and Herman Zeitchik, an American Jewish soldier who stormed the beaches of Normandy and later participated in the liberation of Dachau.

ZOA National President Morton A. Klein said, “We strongly praise President Trump for the strong, principled stand he has taken in supporting Israel, the Jewish people, confronting an Iranian regime intent on acquiring nuclear weapons to commit genocide against Israel, and in resolutely condemning the scourge of anti-Semitism which is frightening growing throughout the world and America.”

We strongly praise President Trump for the strong, principled stand he has taken in supporting Israel, the Jewish people, confronting an Iranian regime intent on acquiring nuclear weapons to commit genocide against Israel, and in resolutely condemning the scourge of anti-Semitism which is frightening growing throughout the world and America.”

Klein added, “President Trump’s words are very timely, given the failure worldwide to confront the scourge of anti-Semitism, as witnessed by the belated rumblings within Britain’s Labour Party regarding its anti-Semitic, anti-Israel firebrand leader, Jeremy Corbyn; the funding by EU nations of NGOs dedicated to Israel’s destruction; the burgeoning support for the Boycott, Sanctions, Divestment (BDS) campaign, which aims at Israel’s eventual elimination, within the Democratic Party here; and the rise at home and abroad in anti-Semitic killings, assaults and other hate crimes.”

“All of this has occurred in so swift and frightening a manner and on such a scale that no-one would have believed this possible just a few short years ago. President Trump’s condemnation of anti-Semitism in his State of the Union address serves notice that his Administration intends to fight this scourge and we look forward to timely action to contain and reverse this frightening trend that threatens the safety and even the very future of Jewish communities everywhere.”

“The ZOA also praises President Trump’s departure from the received wisdom of decades in keeping the Arab war on Israel in a holding pattern that permits no dynamic change and which falsely equalizes Israel and the Palestinian Arabs, as represented by Mahmoud Abbas’ corrupt, brutal dictatorship, the Palestinian Authority (PA), which has rejected several comprehensive peace proposals encompassing full Palestinian statehood in 2000-01 and again in 2008 and 2014. President Trump has exposed Abbas’ extremism and lack of interest in peace and placed the onus for progress where it truly belongs –– on Abbas and the PA.”

“Similarly, President Trump deserves credit for ending President Barack Obama’s Iran nuclear deal, which he rightly described in his speech as ‘disastrous,’ and for reversing the international appeasement of the Iranian regime, which has greatly increased its aggression and dangerous adventurism across the Middle East since that deal was concluded. President Trump has put in place sanctions on Iran which are largely opposed in Europe but with which European nations will mostly be compelled to comply. Already we are seeing the effects of the great pressures and scarcities imposed on the Iranian economy.”

“We applaud President Trump’s policy in these areas and look forward to further action to advance the cause of peace as well as American and Israeli –– indeed, world –– security.”

We would love to hear from you! Please fill out this form and we will get in touch with you shortly.
Trending Z
News February 6, 2019
ZOA Deplores that Pres. Trump Dined with Jew-Haters Kanye West & Nick Fuentes, and Demands he Condemn Them
Uncategorized February 6, 2019
ZOA Honors Trump With Rarely Given Herzl Award for His Great Pro-Israel Work – Joins Ranks of Balfour, Truman, Begin, Meir, Ben-Gurion
News February 6, 2019
ZOA Responds to Questions About Pres. Trump, Kanye West, Fuentes, etc. Issue
Uncategorized February 6, 2019
Zionist Organization of America Honors Donald Trump for Support for Israel, Jewish Community
Center for Law & Justice
We work to educate the American public and Congress about legal issues in order to advance the interests of Israel and the Jewish people.
We assist American victims of terrorism in vindicating their rights under the law, and seek to hold terrorists and sponsors of terrorism accountable for their actions.
We fight anti-Semitism and anti-Israel bias in the media and on college campuses.
We strive to enforce existing law and also to create new law in order to safeguard the rights of the Jewish people in the United States and Israel.
Our Mission
ZOA STATEMENT
The ZOA speaks out for Israel – in reports, newsletters, and other publications. In speeches in synagogues, churches, and community events, in high schools and colleges from coast to coast. In e-mail action alerts. In op-eds and letters to the editor. In radio and television appearances by ZOA leaders. Always on the front lines of pro-Israel activism, ZOA has made its mark.
Related Articles
OP-ED BY: ZOA Staff ZOA Praises Senators Kirk, Manchin, et al., for Anti-BDS Bill

Morton A. Klein, National President of the Zionist Organization of America (ZOA) issued the following statement: The ZOA praises Senators Mark Kirk (R-IL) and Joe Manchin (D-WV) and Representatives Juan Vargas (D-CA-51) and Bob Dold (R-IL-10) for introducing the bipartisan “Combating BDS Act of 2016” (S. 2531/H.R. 4514) into both houses of Congress.  The Combating BDS Act of […]