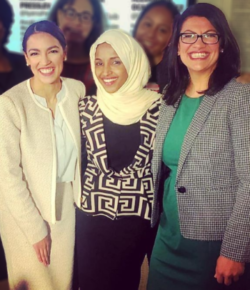 The House Democrats’ toothless, counterproductive, disappointing draft resolution on antisemitism, scheduled to be voted on tomorrow, sends a distressing message to American Jewry that the House Democratic leadership will do nothing to curb radical antisemitic Congresspersons’ persistent, ugly, erroneous defamatory attacks on the Jewish people and the Jewish State, and will instead deflect attention from the real problem of Jew-hatred and Israel-hatred by invoking the specter of “Islamophobia.” The draft resolution fails to name, condemn and urge any action against Congresspersons Ilhan Omar (D-MN), Rashida Tlaib (D-MI) and Alexandria Ocasio-Cortez (D-NY) for making and publicizing repeated antisemitic statements. Even worse, the draft resolution contains counterproductive language defending and protecting the very same radical Muslim Congresspersons who are guilty of making repeated Jew-hating statements (and who have involvements with Israel-bashing groups such as unindicted Hamas-funding co-conspirators the Council on American-Islamic Relations (CAIR) and the Islamic Society of North America (ISNA)).

The draft Democratic resolution also never mentions Reps. Omar, Tlaib and Ocasio-Cortez’s statements reflecting their hatred of the Jewish State, and fails to explain that the State Department official definition of antisemitism makes clear that hatred and bias towards the Jewish State of Israel is a form of antisemitism.

“Whereas accusations of dual loyalty generally have an insidious, bigoted history, including— . . . (4) the post-9/11 conditions faced by Muslim-Americans in the United States, including unfounded, vicious attacks on and threats to Muslim-American Members of Congress.”

Since this resolution was a direct response to the vicious antisemitism and Israel-hatred promoted by these three Congresswomen, we believe this particular resolution should have only dealt with antisemitism. Bringing up other bigotry in this resolution diluted and weakened the message Congress apparently wanted to send on anti-Jewish bigotry. Bigotry against other groups should have been condemned in a separate resolution.

The only four Muslim-Americans who have ever been elected to Congress – Ilhan Omar; Rashida Tlaib; Keith Ellison (D-MN, 2007-Jan. 2019); and André Carson (D-IN, 2008-present) – all have appalling, unapologetic records of antisemitism, bashing America’s strong ally the Jewish State of Israel, and involvements with the CAIR, etc. None of them are from the innocent, peaceful Muslim Reformer camp.

Ilhan Omar refused to apologize for her latest “dual loyalty” slur, and has never apologized for calling Israel “evil” and an “apartheid regime,” promoting antisemitic anti-Israel boycotts, divestment and sanctions (BDS), lying to voters about her views on BDS while running for Congress, falsely condemning Israel for committing “massacres” in Gaza, and endangering all Americans by seeking “compassion” and reduced sentences for convicted ISIS terrorists – to name but a few.

Likewise, Rashida Tlaib has never apologized for her “dual loyalty” accusations (saying on January 6, 2019 that pro-Israel Congresspersons “forgot what country they represent”), calling Israel “racist,” promoting antisemitic BDS, replacing “Israel” on her Congressional office map with “Palestine,” writing for antisemite Farrakhan’s “Final Call” newspaper, meeting and taking pictures at her Congressional swearing-in with Al Awda co-founder (a group calling for Israel’s destruction) and pro-Hezbollah activist Abbas Hamideh, and celebrating her Congressional win by wrapping herself in the flag of the terrorism-supporting Palestinian Authority dictatorship that is hostile to the United States.

Another antisemitic Congresswoman, not mentioned in the House Resolution, is radical Rep. Alexandrea Ocasio-Cortez who defended Rep. Omar’s statements.  Rep. Alexandria Ocasio-Cortez is a leader of the Democratic Socialists of America – which adopted an anti-Israel BDS policy in 2017 – together with shouts for the end of Israel’s existence (“from the river to the sea, Palestine will be free”).  AOC also tweeted that it was an “honor” to speak with antisemite Jeremy Corbyn; falsely accused Israel of massacring Palestinians when Israel defended her citizens from a massive violent Hamas invasion at the Gaza border; refused to take a pro-Israel trip to Israel; and back-peddled on supporting Israel’s continued existence.

Their refusal to support U.S. ally Israel is unpatriotic. It is anti-American to not support a strong relationship with America’s strongest and most reliable ally, the Jewish State of Israel. Over a century ago, one of ZOA’s earliest presidents, Louis Brandeis (who later became the first Jewish Supreme Court Justice) pointed out that Zionism and American patriotism are consistent with one another. It’s patriotic to support any strong American ally. And Israel is an extraordinarily devoted and trustworthy friend to the United States. But instead of supporting our Jewish ally, Tlaib and Omar, etc. support cruel, monstrous, corrupt, antisemitic regimes such as communist dictator Maduro’s Venezuela and the terrorist dictator Abbas’ Palestinian Authority.

There is a far better proposed House resolution, H. Res. 72, entitled “Rejecting anti-Israel and anti-Semitic hatred in the United States and around the world,” introduced by Congressman Lee Zeldin (R-NY) and co-sponsored by 96 Republican Congresspersons. ZOA has praised H. Res. 72 and urged its passage.  H. Res. 72 names, sets forth and condemns the antisemitic statements of Rep. Ilhan Omar, Rep. Rashida Tlaib, Louis Farrakhan and others. Unfortunately, H. Res. 72 has been languishing in committee. 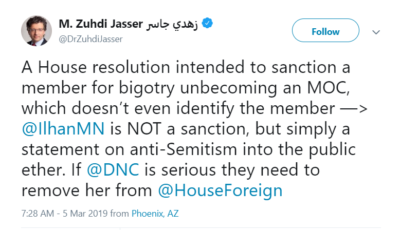 ZOA is pleased to note that the Simon Weisenthal Center called for Omar to be removed from the Foreign Relations Committee. Also, 12 other Jewish and American security organizations sent a letter to Speaker Pelosi after ZOA’s January 18, 2019 letter to Speaker Pelosi and ZOA’s additional public calls to remove antisemite and Israel-hater Ilhan Omar from her committee assignments. In addition, over 200,000 people signed a petition calling for Rep. Omar to be removed from the Foreign Relations Committee. Reps. Omar’s and Tlaib’s committee positions enable them to damage the U.S.-Israel alliance and U.S. security, and give them an undeserved major platform for spewing their antisemitic hate and promoting antisemitic policies.

The House needs to take concrete action against antisemitism and antisemites. They must be sanctioned, censured and removed from all committees. This Resolution does virtually nothing.

We would love to hear from you! Please fill out this form and we will get in touch with you shortly.
Trending Z
Uncategorized March 5, 2019
ZOA Analysis: Most American Rabbis Who Are Boycotting Some Israeli Ministers Are From Extremist Left Wing Groups (J Street; T’ruah; JVP)
Uncategorized March 5, 2019
ZOA: Israel’s Reasonable Judicial Reform Proposals Are Good for Democracy, the Rule of Law and the Economy
News March 5, 2019
ZOA is Disappointed, Offended and Frightened by 211 U.S. House Votes Supporting Jew-Hating, Israel-Hating Rep. Ilhan Omar
Uncategorized March 5, 2019
Israel’s “Right of Return” Grandparent Clause is De-Judaizing the Jewish State – Eliminate It
Center for Law & Justice
We work to educate the American public and Congress about legal issues in order to advance the interests of Israel and the Jewish people.
We assist American victims of terrorism in vindicating their rights under the law, and seek to hold terrorists and sponsors of terrorism accountable for their actions.
We fight anti-Semitism and anti-Israel bias in the media and on college campuses.
We strive to enforce existing law and also to create new law in order to safeguard the rights of the Jewish people in the United States and Israel.
Our Mission
ZOA STATEMENT
The ZOA speaks out for Israel – in reports, newsletters, and other publications. In speeches in synagogues, churches, and community events, in high schools and colleges from coast to coast. In e-mail action alerts. In op-eds and letters to the editor. In radio and television appearances by ZOA leaders. Always on the front lines of pro-Israel activism, ZOA has made its mark.
Related Articles
OP-ED BY: Morton A. Klein ZOA Mourns Passing of Jacques Torczyner, Zionist Leader/Former ZOA President