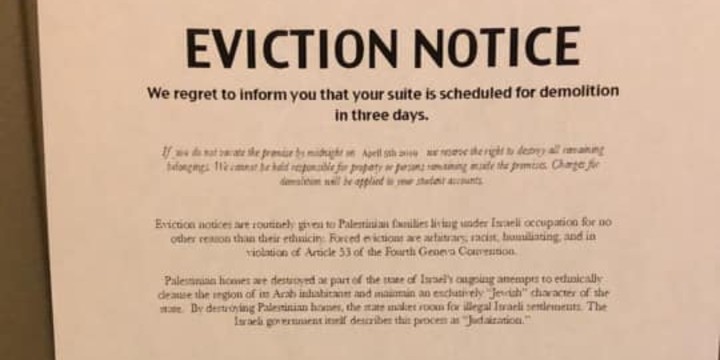 The notices contained false information calculated to incite hatred of Jews and Israel – including that Israel “routinely” gives eviction notices to Palestinian Arabs “for no other reason than their ethnicity,” and that Israel is trying to “ethnically cleanse the region of its Arab inhabitants and maintain an exclusively ‘Jewish’ character of the state.”  Making matters worse, the eviction notices appeared to be endorsed by Emory University; the notices bore the university’s official seal, together with a stamp and a signature reflecting that the eviction notices received “Office of Resident & Housing Approval.”

On April 5, 2019, ZOA National President Morton A. Klein, Susan B. Tuchman, Esq., Director of ZOA’s Center for Law and Justice, and Leore Ben-David, Managing Director of ZOA Campus, wrote a letter to President Sterk expressly condemning Emory University’s inadequate response to the mock eviction notices.  Paul Marthers, Interim Vice President for Campus Life and Vice Provost for Enrollment Management, had issued a community message about the eviction notices that “whitewashed this group’s motives and goals, portraying SJP as a benevolent group with compassionate intentions.”  Yet a 2018 study by the Jerusalem Center for Public Affairs described SJP as a “terror-affiliated anti-Semitic network” that “incites hatred and violence against Jewish students, and rejects the existence of the state of Israel in any borders,”

“Demonizing Israel, denying the Jewish people their right to self-determination, and denying Israel’s right to exist are manifestations of anti-Semitism according to U.S. government standards,” wrote the ZOA professionals. “But Mr. Marthers did not even mention the word anti-Semitism in his community message.”

ZOA urged that if Emory University’s policies are to have meaning and if the university is truly committed to a learning environment that is safe and welcoming for Jewish and other students, then President Sterk should take the following steps:

We would love to hear from you! Please fill out this form and we will get in touch with you shortly.
Trending Z
Uncategorized April 8, 2019
FLASH: ISRAEL-JORDAN PEACE TREATY (1994) GUARANTEES JEWS ACCESS TO THE TEMPLE MOUNT – LET MY PEOPLE PRAY
Uncategorized April 8, 2019
ZOA Analysis: Most American Rabbis Who Are Boycotting Some Israeli Ministers Are From Extremist Left Wing Groups (J Street; T’ruah; JVP)
Uncategorized April 8, 2019
Israel’s “Right of Return” Grandparent Clause is De-Judaizing the Jewish State – Eliminate It
Uncategorized April 8, 2019
Exclusive: ZOA Accuses Ilhan Omar of Hating the U.S. ‘as Much as Israel,’ Lauds Kevin McCarthy for ‘Throwing Her Off the HFAC’
Center for Law & Justice
We work to educate the American public and Congress about legal issues in order to advance the interests of Israel and the Jewish people.
We assist American victims of terrorism in vindicating their rights under the law, and seek to hold terrorists and sponsors of terrorism accountable for their actions.
We fight anti-Semitism and anti-Israel bias in the media and on college campuses.
We strive to enforce existing law and also to create new law in order to safeguard the rights of the Jewish people in the United States and Israel.
Our Mission
ZOA STATEMENT
The ZOA speaks out for Israel – in reports, newsletters, and other publications. In speeches in synagogues, churches, and community events, in high schools and colleges from coast to coast. In e-mail action alerts. In op-eds and letters to the editor. In radio and television appearances by ZOA leaders. Always on the front lines of pro-Israel activism, ZOA has made its mark.
Related Articles
OP-ED BY: ZOA Staff ZOA Condemns UNESCO’s Res. Calling Jewish Tomb of Patriarchs & Rachel’s Tomb Muslim Sites

The Zionist Organization of America (ZOA) has condemned the sinister UNESCO resolution declaring the Tomb of the Patriarchs in Hebron and Rachel’s Tomb in Bethlehem to be Muslim sites, while making no mention of these being Jewish sites. The UNESCO resolution called both sites “an integral part of Palestine.” This is a very dangerous and frightening development […]

Zionist Organization of America (ZOA) President Morton A. Klein released the following statement: Much of the Muslim world has an extraordinary sometimes lethal hatred of LGBT people. That’s why in January (2016), the very first sentence of a ZOA Op-Ed in the Jewish Exponent stated:  “Syrian immigrants pose a grave danger to all Americans – […]